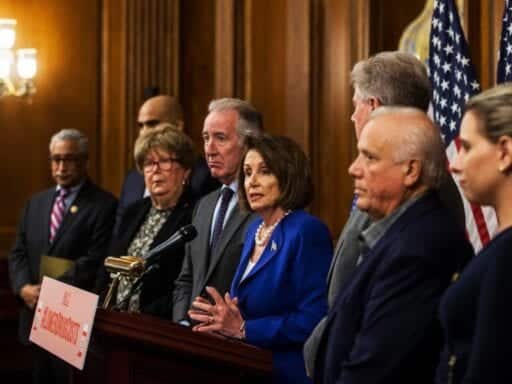 Progressives played a major role in shaping the final version of the legislation.

House Democrats just passed an ambitious bill to lower prescription drug prices after resolving internal conflicts that threatened to sink the legislation as recently as this week. The Senate is expected to give the bill the same treatment it’s given hundreds of others: it won’t take it up.

Because of this dynamic, the bill is widely seen as a values statement for Democrats seeking to put a stake in the ground. It’s also an achievement lawmakers can point to in the 2020 elections to show that they kept a midterms campaign promise — and advanced important legislation — even as the party continues to work on the impeachment inquiry.

This bill, also known as H.R.3, the Elijah Cummings Lower Drug Costs Now Act, would dramatically change the power that the US government has to directly negotiate drug prices for Medicare recipients — resulting in more than $450 billion in spending reductions for the program over the course of a decade. These savings would be offset, in part, by costs tied to expanding dental, vision and hearing coverage for Medicare recipients, a policy change also included in the bill, according to an estimate from the Congressional Budget Office.

The final version of this legislation is a byproduct of extensive back-and-forth between House Leadership and members of the Congressional Progressive Caucus, who’ve played a major role in pushing for this bill to be more aggressive. Earlier this week, progressives still had concerns about whether the legislation was inclusive enough, though CPC Chairs Pramila Jayapal and Mark Pocan were ultimately able to secure concessions that satisfied these qualms.

Ultimately, HR 3 will mandate price negotiations on at least 25 drugs the first year, then a minimum of 50 every year after. It will also include even stronger penalties for companies that raise the prices of drugs at a rate higher than that of inflation.

Still, there were changes progressives pushed for that they did not receive, including expanding access to lower prescription drug prices for people who are uninsured. The final version of the bill would only offer lower prices to patients covered by Medicare and private insurance.

Despite these omissions, Democrats, including progressives, overwhelmingly voted in favor of the bill, which passed 230-192.

“While we didn’t get everything we wanted, the changes we have negotiated over the past few months will bring relief to millions of Americans who would otherwise have been left out of this landmark legislation,” Jayapal and Pocan said in a statement.

Democrats’ proposal would mark a major shift in the way prescription drug prices are set in the US, by empowering the federal government to directly negotiate drug prices for Medicare recipients as well as others purchasing the drug.

Under current law, the Health and Human Services secretary is barred from engaging in negotiations for prescription drugs covered by Medicare, an arrangement established in 2003 as part of the Medicare Modernization Act that set up Medicare’s prescription drug benefit. Presently, private plans that offer Medicare Part D benefits negotiate drug costs independently. But they often lack the leverage to secure the kinds of reductions the government may be able to obtain, given its bargaining power.

The final bill enables the HHS secretary to negotiate the prices of as many as 250 drugs annually. Additionally, it would penalize companies that do not negotiate with HHS with a fine starting at 65 percent of a drug’s gross sales from the prior year. For every quarter that the company does not engage, the penalty goes up by 10 percentage points, until it hits 95 percent of a drug’s gross sales.

The drugs the HHS secretary would prioritize under the plan are ones that are currently most costly to Medicare and the broader health care system. These drugs would be identified based on their price and volume of sales; at least 25 would be negotiated in the first year, and at least 50 would be negotiated beginning the second year.

Whatever price is negotiated by HHS will be available to individuals covered by private plans and Medicare. The prices of drugs in other developed countries will be used as a reference point to ensure that negotiations result in a price that’s no more than 1.2 times the average price in six other places.

The proposal would also address pricing hikes that have been applied to different drugs covered by Medicare Parts B and D, requiring companies to either undo any increases that surpass the rate of inflation, or rebate the entirety of those hikes since 2016 to the Treasury. An amendment from Jayapal would also make sure that people covered by private plans could obtain rebates as well.

Additionally, the bill would cap out-of-pocket prescription drugs costs for those covered by Medicare Part D to $2,000 annually. Currently, there is no cap.

Progressives played a significant role in helping shape the bill

House progressives used their influence to play a major role in shaping this legislation throughout the drafting process. Because of the ongoing push from progressive lawmakers, the bill features direct negotiation instead of arbitration, and applies to a wider range of drugs.

Although progressives and House leadership wound up reaching an agreement about the final version of H.R.3, there were two key changes that did not ultimately get implemented.

One of these updates would have expanded the legislation to ensure that uninsured patients are also able to benefit from the reduced drug prices. The other would have explicitly rolled back the ban on Medicare directly negotiating prices.

Although the Democratic caucus overall was supportive of the legislation, lawmakers including Reps. Lloyd Doggett and Ro Khanna raised concerns about the omission of uninsured individuals. As they note, it’s at least one area Democrats could stand to reevaluate as they continue to build on this bill down the line.

While HR 3 has improved since yesterday, 30 million uninsured Americans will see no benefits from leadership’s bill.

My bill with @SenSanders reduces drug prices for everyone. That’s what progressives must keep fighting for. https://t.co/Ih7qYxTRzA

For now, while the legislation enables Democrats to send a message on this issue, the Senate’s disinterest means that it won’t become law anytime soon. Although this outcome was an anticipated one, House Democrats had initially attempted to navigate the issue with President Donald Trump, who said that reducing prescription drug prices was a priority for him.

Trump, however, has been less than reliable on this — and on many other fronts — ultimately coming out against the bill.

The Trump administration says it must lock up families to keep them together. That’s not true.
Trump loves dictators. Erdogan is the latest to take advantage of that.
What to watch this weekend, on all your favorite streaming platforms
Joe Biden racks up another big endorsement: Elizabeth Warren
Susan Collins: No Supreme Court vote before Election Day
Early voting in Georgia’s Senate runoffs is massive — but what does that mean?