The Irishman is very long and very popular, says Netflix 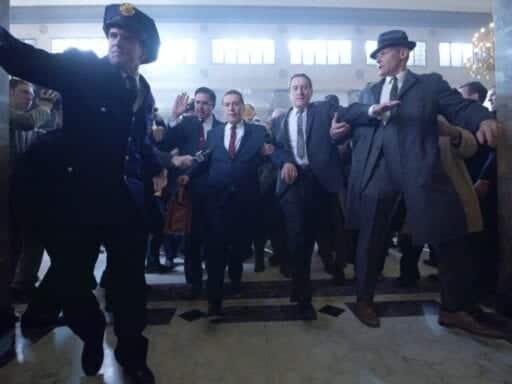 Who wants to watch a mob movie that runs three hours and 30 minutes? More than 26 million people, according to Netflix.

The Irishman, the Martin Scorsese/Robert De Niro/Al Pacino/everyone else who’s ever been in a mob movie movie, is very long.

Netflix subscribers in more than 26 million homes around the world watched the movie in the first week it was available on the streaming service, Netflix announced today. The company thinks that number will hit 40 million within the first month of The Irishman’s digital debut.

It’s a shiny statistic, and an important one for Netflix, which wants to prove it can be the home of big, popular movies from people you’ve heard of.

That will be particularly important in the next few years, as a deluge of competitive streaming services launch their own attention-grabbing projects — and as Netflix continues working to convince Hollywood stars to bring their movies directly to the streaming service instead of showing them in theaters.

My friends, I’ve got some news from the big guy at the top: THE IRISHMAN was watched by 26,404,081 accounts globally — within its first 7 days on Netflix. pic.twitter.com/abVV993CWS

These numbers come with caveats. For instance, Netflix measured the number of Netflix accounts that have watched the movie so far, not the total number of people. Assuming some viewers watched the movie with at least one other person at the same time, it’s likely that the 26-million and 40-million numbers are significantly lower than the movie’s total audience.

On the flip side: When Netflix says someone “watched” something on the service, it means they watched at least 70 percent of the movie or TV show.

The most important caveat, though, is that we don’t really know how The Irishman’s audience compares to that of other stuff on Netflix, because Netflix doesn’t provide viewing data for most of its shows and movies, save for a handful of things they want to highlight.

We also know that Netflix thinks the numbers for The Irishman are worth bragging about. In addition to tweeting about it, Netflix also made sure that Ted Sarandos, the company’s chief content officer, highlighted the numbers at an investor conference today.

The dual release indicates that Netflix is targeting at least three separate audiences when it announces numbers like these: Wall Street, which needs to decide whether the company’s stock is worth buying; Hollywood talent like Scorsese and De Niro, who need to decide whether they should work with Netflix over a different TV network, streaming service, or movie studio; and people like you and me, who may be more tempted to watch something if we know other people have watched it.

If you’re the kind of person who gets frustrated by the selective release of streaming numbers — say, you work at a movie studio or TV network that competes with Netflix — you’re going to have to get used to it.

Disney, which entered the streaming wars last month with the release of its Disney+ streaming service, said more than 10 million people had signed up for a subscription, but wouldn’t specify how many of those had paid versus how many had signed up for a free trial or got a free year because they’re a Verizon subscriber. Apple has yet to release any viewership or subscriber data for its TV+ streaming service, which also launched last month. Expect more minimal disclosure next year, too, when AT&T and Comcast launch their respective HBO Max and Peacock services.