The Judiciary Committee scheduled a vote on Kavanaugh for Friday. Ford hasn’t even testified yet. 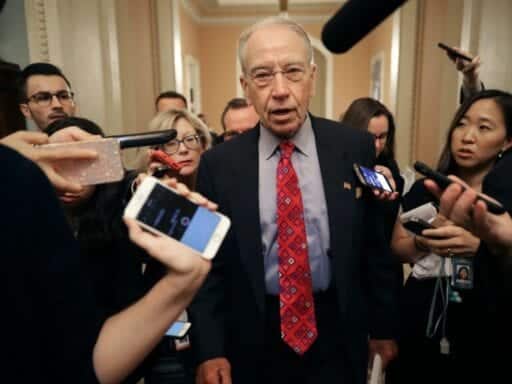 The vote’s just one day after a hearing scrutinizing sexual misconduct allegations.

Senate Judiciary Chair Chuck Grassley (R-IA) has rescheduled a committee vote on Supreme Court nominee Brett Kavanaugh for this upcoming Friday. That’s just one day after a hearing that will take place on Thursday, which is set to scrutinize sexual misconduct and assault allegations that have been brought against Kavanaugh.

Grassley’s announcement of the committee vote is the latest signal that Republicans are ready to barrel ahead with Kavanaugh’s confirmation, in spite of the recent accusations that have been levied by Christine Blasey Ford and Deborah Ramirez. Ford — who has said that Kavanaugh tried to force himself on her while both of them were in high school — is set to testify, along with Kavanaugh, on Thursday. Kavanaugh has unequivocally denied all of the allegations.

Senate Majority Leader Mitch McConnell on Tuesday emphasized that he was eager to hear from Ford — while simultaneously casting doubt on the legitimacy of her allegations.

“The American people … insist that vague, unsubstantiated, and uncorroborated allegations of 30-plus-year-old misconduct — where all the supposed witnesses either totally deny it or can’t confirm it — is nowhere near grounds to nullify someone’s career or destroy their good name,” McConnell said in floor remarks.

A Grassley spokesperson said that the announcement of the vote was simply a procedural move in case the committee stands ready to advance Kavanaugh right after Thursday’s hearing. “Committee rules normally require executive business meetings to be noticed three days in advance, so an executive business meeting is being noticed tonight in the event that a majority of the members are prepared to hold one on Friday,” the spokesperson said in a statement.

Republicans have an 11-10 majority in the Judiciary Committee, which sets Kavanaugh up for a likely positive recommendation from the panel. Of the Republicans, Sen. Jeff Flake (R-AZ) is the only one who’s given any indication that he could potentially flip and oppose the nomination. Flake has previously said he wouldn’t vote on Kavanaugh’s nomination until he had heard from Ford.

His vote, like those of a number of other lawmakers, could come down to her testimony on Thursday. “Obviously, if you believe the charges are true, then you vote no,” Flake has said.