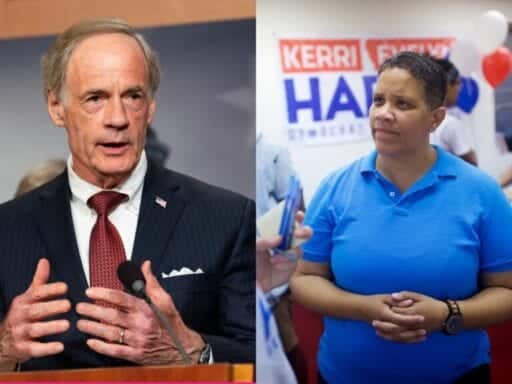 Delaware’s US Senate primary usually has a predictable outcome, with a longtime Democratic incumbent usually coasting to a win. This year could be different.

Sen. Tom Carper (D-DE), a moderate Democrat, is up for reelection. Carper is a former governor and has been in the Senate since 2001. He rarely faces a serious primary challenger. In 2012, he beat businessman Keith Spanarelli with 88 percent of the vote and went on to easily defeat his Republican opponent in the general election.

Like a number of other centrist Democratic lawmakers around the nation, Carper is facing a challenge from the left in 2018. His primary opponent is Kerri Evelyn Harris, an Air Force veteran, community activist, and LGBT woman of color. She has far less money than Carper, but her entrance into the primary has already shaken up what is normally considered a sleepy race.

While they acknowledge defeating Carper will be difficult, national progressive groups are excited at the prospect of winning such a high-profile seat — Delaware is a blue enough state that the winner of the primary will likely win in November.

Carper, a 71-year-old senator who told the Washington Post’s Dave Weigel that his next term may be his last, is known for being a moderate.

“The thing I’ve heard the most from people in Delaware over the last several years is, ‘Why can’t you guys in Congress work together?’” Carper said during his debate with Harris. “Ted Kennedy once said he is willing to compromise on policy but not principle. I think that’s good advice.”

The three-term senator opposes Medicare-for-all and was one of the Democrats that voted to roll back key parts of the landmark 2008 Dodd-Frank Act, easing up federal regulations on small and mid-size banks.

“Among the people that have pushed hardest for me to support the legislation are, believe it or not, credit unions and community banks,” Carper told the Intercept in March. Carper’s reasoning echoed that of a number of red-state Democrats, including Sens. Jon Tester (D-MT), Heidi Heitkamp (D-ND), and Joe Donnelly (D-IN). Fellow Delaware Sen. Chris Coons, a Democrat, also voted for the bill.

Given the nature of the state Coons and Carper are representing, the vote may not come as a surprise. The financial industry is a huge employer in Delaware, employing over 47,000 Delawareans as of 2018, according to the Bureau of Labor Statistics.

Pharmaceutical companies are also big players in the state, something that Harris and progressive groups have tried to tie to Carper’s vote against a bill introduced by Sen. Bernie Sanders (I-VT) that would have allowed cheaper pharmaceutical drugs to be imported from Canada. Carper and Coons were both among a group of 13 Democratic senators who opposed the measure.

Carper’s campaign has pointed out his support for a $15 minimum wage, and going into Thursday’s primary, the senator has the support of environmental groups like the League of Conservation Voters and gun safety group Giffords. He has the support of the state’s two largest labor unions — the Delaware AFL-CIO and the Delaware State Education Association — and has raised about $3 million in campaign cash as opposed to Harris’s approximately $114,000 (she has also gotten a $100,000 cash infusion from an independent expenditure from the Working Families Party).

So far, the left’s biggest 2018 primary win was the victory of Andrew Gillum in Florida — a progressive mayor who is now fighting a tough race against Trump-like Republican Ron DeSantis. The rest of the left’s victories have come with House races — most notably Alexandria Ocasio-Cortez’s victory against House Democratic Caucus Chairman Joe Crowley in the Bronx.

Simply put, Harris beating a sitting US senator in a blue state would be a huge deal.

Harris is embraced by progressive stars like Ocasio-Cortez, whom she campaigned with this past weekend, as well as groups like the Working Families Party and Justice Democrats. But Harris is hesitant to describe herself using the word “progressive.”

“I avoid that term because it’s shut some people off to it,” she said in a recent interview with Vox. “I’m not pushing left, I’m not pushing right. I’m pushing toward the people.”

In tiny Delaware, which usually doesn’t have a lot of political drama, Harris’s challenge to Carper seems to be stirring some excitement. The two recently squared off at a sold-out debate — the first and only one of the primary season.

At the very least, progressive ideas are getting a high-profile platform in Delaware, but Harris is hoping she can carry momentum all the way to the Senate. With three Republicans also running in the GOP primary — Sussex County councilman Rob Arlett, finance attorney Gene Truono, and perennial candidate Rocky De La Fuente — there are some concerns that a primary win by a leftist candidate could pave the way for Delaware’s Senate seat flipping red.

“In the state of Delaware, it tends to be the same people getting elected over and over again, from the same families and the same network,” Harris told Vox. “We talk about entrenchment nationally, but there’s entrenchment in our state.”

Harris’s challenge to Carper is part of a larger pattern of the Democratic party’s leftist flank attempting to primary centrist incumbents. A Senate seat in Delaware could be the left’s biggest prize yet.

This is a worst-possible wildfire scenario for Southern California
YouTube makes $15 billion a year from ads — and pays more than half of that to video makers
Why you’re seeing the 10-Year Challenge everywhere
Why are Bird Box memes so popular? It’s complicated.
Explosive devices sent to the Obamas, the Clintons, and other Trump critics
Jupiter at opposition: Monday is the best night of the year to look at the gas giant