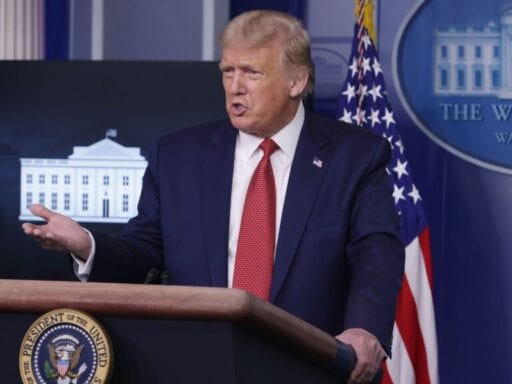 On Saturday, President Donald Trump signed four memorandums and executive orders that, he claimed, would provide relief to Americans struggling financially during the Covid-19 pandemic.

One order purports to provide enhanced unemployment benefits to some Americans — although on less generous terms than the recently expired benefits provided by the CARES Act. A second defers payment of payroll taxes. A third directs several federal agencies to take vague, unspecified actions regarding evictions and foreclosures. And a fourth defers payments on federal student loans.

Trump’s four executive actions come after negotiations over a new pandemic relief bill to replace the CARES Act appear to have stalemated. Though House Democrats passed a $3 trillion replacement for the CARES Act in May, Republicans did not present their $1 trillion counteroffer until late July — just days before key provisions of the CARES Act expired. The Republican proposal was also larded with poison pills, such as a bill that would immunize most businesses from coronavirus-related lawsuits, that earned swift rebukes from Democratic leaders.

But the reality is more nuanced. With one possible exception — there is a strong legal argument against Trump’s unemployment benefits order — Trump’s four actions are probably legal. The problem with these actions isn’t that they are likely to be blocked by a federal court, it’s that, with one exception, federal law places fairly rigid constraints on the president’s ability to provide pandemic relief. And Trump largely appears to be complying with those constraints.

One measure may prove workable: the memorandum deferring payment of student loans. That memo appears to be lawful, and is likely to provide real relief to many borrowers.

Otherwise, there is less to Trump’s actions than the president would like voters to believe. It’s far from clear whether anyone will receive enhanced unemployment benefits, due to the many legal constraints on those benefits. And even if those benefits are paid, they will be paid out of a limited pool of funds that will run out of money quickly.

Similarly, while Trump deferred payments of some taxes, he can’t relieve taxpayers of their obligation to eventually pay those taxes. For this reason, according to University of Chicago tax law professor Daniel Hemel, “many employers will continue to withhold Social Security taxes from paychecks lest they be on the hook for the $$$ next year.”

Trump’s new policy on unemployment benefits has many problems, only one of which is that it may be illegal

Of the four executive actions Trump signed, the one that likely crosses the line in terms of legality concerns unemployment benefits.

But it’s far from clear that Trump has statutory authority to make these payments. And even if he does, Trump’s power to do so is so limited that it is far from clear who, if anyone, will receive the $400 in weekly benefits and how long those benefits will last.

For the unemployment insurance memorandum, Trump relies on a provision of the Robert T. Stafford Disaster Relief and Emergency Assistance Act that permits the president to “provide financial assistance” to victims of a major disaster, such as a pandemic, to help “address personal property, transportation, and other necessary expenses or serious needs resulting from the major disaster.”

The memorandum directs “up to $44 billion” in disaster relief funds to be spent to provide most unemployed people with $300 — not the full $400 the memo seeks to provide to unemployed people — in federal benefits a week. Why only $300? Because federal regulations provide that the federal share of such disaster relief “shall be 75 percent.” The remaining quarter of the relief funds “shall be paid from funds made available by the State.”

So, if Trump wants individuals to receive $400 a week, $100 of that money must come from the states.

That’s a serious problem, given the tremendous fiscal burden the pandemic has imposed on state governments. According to a July paper by the Center on Budget and Policy Priorities’ Elizabeth McNichol and Michael Leachman, “the state budget shortfalls expected from COVID-19’s economic fallout will total a cumulative $555 billion over state fiscal years 2020-2022.”

States, moreover, have far less power to borrow funds during lean economic times than the federal government. At least 40 states require a balanced budget, meaning that deficit spending is simply off the table. It’s far from clear that any of these states will be able to find the money to pay an additional $100 a week in unemployment benefits even if they want to.

Bear in mind, as well, that Trump’s memo only calls for $44 billion to be spent on unemployment benefits. As Georgetown University law and economics professor David Super writes, “with roughly 25 million people receiving unemployment benefits, the $300 federal share of the new weekly benefit would last about six weeks, or until mid-September.” At that point, unemployed people would be in the same boat they’re in now.

The $44 billion could last longer, of course — if many states do not participate in this program.

Super also points to another problem with Trump’s memo — it may be illegal. Although one provision of the Stafford Act allows the president to “provide financial assistance” to disaster victims with relatively few restrictions, a separate provision only permits the president to provide benefits to the unemployed that do “not exceed the maximum weekly amount authorized under the unemployment compensation law of the State in which the disaster occurred.” But the whole point of the enhanced unemployment benefits is to provide additional funding on top of the amount authorized by state law.

But even if Trump does have the statutory authority to provide enhanced unemployment benefits, those benefits will be short-lived and likely will not be available in many states — if they are available at all.

Trump’s tax memorandum appears legal, but unlikely to accomplish much

But, while the Trump administration may delay collection of certain taxes, such a delay is unlikely to accomplish much. It’s likely that most workers will never see the impact of this policy on their paychecks.

Delaying tax payments makes sense in certain circumstances. Suppose that a tornado wipes out much of a town and leaves local businesses without electricity for weeks. A federal order delaying collection of taxes will allow those businesses to rebuild, and to figure out how to operate in the middle of a disaster, without also facing the additional burden of setting aside money to pay for federal taxes.

But the law Trump relies on in his memo only allows the federal government to delay payments for up to a year. It doesn’t relieve taxpayers of their obligation to pay those taxes eventually.

Under normal circumstances, federal law requires employers to deduct a percentage of each of their employees’ wages in order to cover various federal taxes, and to pay this money to the IRS.

The penalties for failing to do so are quite high. An employer that is just one day late in paying such taxes can be required to pay 2 percent of the unpaid tax as a penalty. After 16 days, this penalty rises to 10 percent. And an employer who “willfully” evades its obligation to withhold money from their employees and provide that money to the government could potentially be liable for 100 percent of the money their workers owe.

Trump’s memo effectively lifts these penalties for as long as it is in effect, but it cannot do so forever. And employers who do not withhold payroll taxes from their workers are likely to be in for a nasty surprise when the tax bill comes due.

Think of it this way. Imagine that I owe $3,000 this year in payroll taxes on my Vox Media salary. Ordinarily, Vox will withhold that money from my paycheck and remit it to the IRS. Under Trump’s memo, Vox could decide not to withhold that money. But Vox is still going to owe it eventually. And, when that obligation does come due, Vox could still be subject to penalties if it doesn’t turn over the $3,000 it owes to the government right away.

As Hemel, the tax law professor, told me, the IRS has not yet issued guidance on what happens to employers who fail to pay once Trump’s memo expires. But he emphasized that federal law only allows the Treasury to delay payments for up to one year.

There are other complications. Where is Vox Media going to find the money to make those future payments if they haven’t been withholding it from my paycheck? Will it order me — and all of its other impacted employees — to give back the money that we’ve already been paid? And what if we’ve already spent that money? Does that mean that my future paychecks get docked to cover the deferred tax bill?

Trump, for what it’s worth, says that he’ll make this temporary deferral of payroll taxes permanent if he wins the 2020 election. But he’s down in the polls. And a permanent tax holiday would require an act of Congress — something that Congress is far from certain to support even if Republicans hold onto power. Payroll taxes, after all, fund Social Security and Medicare. Cutting those taxes potentially endanger those two popular programs.

Many employers, in other words, are likely to continue withholding payroll taxes even if they are temporarily not required to do so. Why risk being unable to make mandatory tax payments when Trump’s memo is no longer in effect?

The CARES Act included a 120-day moratorium on evictions, but that moratorium expired on July 24. On Saturday, Trump signed an executive order claiming that his administration will “take all lawful measures to prevent residential evictions and foreclosures resulting from financial hardships caused by COVID-19.”

But the executive order itself doesn’t actually do anything, at least not on its own.

It requires the secretary of the Treasury and the secretary of Housing and Urban Development to “identify any and all available Federal funds to provide temporary financial assistance to renters and homeowners who, as a result of the financial hardships caused by COVID-19, are struggling to meet their monthly rental or mortgage obligations.” And it requires HUD to “take action, as appropriate and consistent with applicable law, to promote the ability of renters and homeowners to avoid eviction or foreclosure resulting from financial hardships caused by COVID-19.”

The order, in other words, instructs various agencies to look for ways to help out renters and homeowners who are struggling to meet their financial obligations. Maybe those agencies will find something. But the executive order itself doesn’t provide any assistance to anyone.

Trump’s final memorandum instructs the Education Department to temporarily suspend payments and interest “on student loans held by the Department of Education until December 31, 2020.” This relief is real, and it also appears to be lawful.

But people with student loans are likely to be the only people who see much relief from Trump’s executive actions. For the most part, the problem with those actions isn’t that they are illegal. It’s that the legal constraints on Trump’s actions prevent them from doing much.