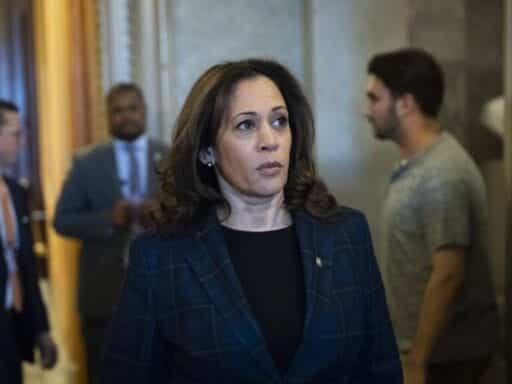 Harris has come closer than any other 2020 candidate to proposing a basic income. It falls short.

Likely 2020 Democratic presidential candidates are in the midst of a kind of big-idea arms race, with each one attempting to pivot left by endorsing bigger and bigger plans to expand the safety net.

The latest volley in the competition is the LIFT the Middle Class Act from Harris. As the Atlantic’s Annie Lowrey explains, the bill would offer a sizable cash payment to most middle-class households. Single people would get $250 per month or $3,000 a year, married couples would get $500 per month or $6,000 a year, and it would phase out for singles without kids making $50,000 or more, and for married couples or single people with kids making $100,000 or more. It costs about $200 billion in the first year or $2 trillion over 10, roughly in the range of the price tag for the 2017 tax cuts.

Like a somewhat similar bill from Rep. Ro Khanna and Sen. Sherrod Brown last year, you can think of Harris’s plan as a particularly massive expansion of the earned income tax credit, so that the solidly middle-class benefit too, not just the working poor. And instead of loading up benefits at tax time, people could get them as a monthly check in the mail.

It’s a big expansion of the safety net. The Center on Budget and Policy Priorities estimates that it would lift 9 million people out of poverty. And, not for nothing, but it’s arguably the closest thing that any 2020 contender has proposed to a universal basic income, an idea that is exactly what it sounds like: a guaranteed cash benefit to every American. Harris’s office claims 80 million total Americans would benefit in some way. That’s not everyone, as under a true UBI, but it’s a big step.

And it’s a good step, I think. The US spends a lot less on anti-poverty programs than most rich countries, and the LIFT Act would substantially remedy that. If I were a senator and there were a vote on it, I’d vote yes.

But the bill has some significant shortcomings. Its biggest weakness, which limits its effectiveness as an anti-poverty tool, is that recipients must be working and earning at least $3,000 (or $6,000 for couples) a year to get the full benefit. If you make $0, you get $0 in benefits. But a rising number of Americans, particularly single moms, report having no cash earnings from welfare or work. Millions more can’t or don’t work and rely on support from family, or programs like Social Security Disability Insurance and Supplemental Security Income for disabled individuals; the LIFT Act cuts them out.

The bill is also oriented toward adults. But poverty in the US is concentrated disproportionately among children; the child poverty rate is higher than the overall population’s poverty rate. So it stands to reason that a cost-effective way to reduce poverty would be to direct transfers to families with children.

To be a maximally effective anti-poverty plan, the LIFT Act would give full benefits to poor beneficiaries even if they’re not working, and it would be combined with a child benefit like Sens. Michael Bennet and Sherrod Brown’s American Family Act, which would give $250 to $300 per month per child to all but the richest families in America, with no phase-in.

The details of how the LIFT Act works

The LIFT Act is structured like a trapezoid, as the following diagram from the Tax Policy Center’s Elaine Maag shows:

The phaseout is much milder, with middle- and upper-middle-class families and individuals losing only 15 cents for every $1 their income grows after the phaseout starts (at $30,000 for individuals without kids, $60,000 for married couples, and $80,000 for single people with kids).

America’s two existing refundable tax credit programs for poor families, the earned income tax credit (EITC) and the child tax credit, also have this kind of trapezoidal structure: They phase in as families earn more money, then max out, then slowly phase out as they earn even more money than that. With the refundable child tax credit, families earning under $2,500 a year don’t get anything, and it doesn’t fully phase in until families are earning nearly $12,000 a year. That substantially limits its usefulness to the very poor.

The LIFT Act would solve a couple of big problems with our existing system. One, it would extend the value of the EITC, which phases out entirely for families after they reach $39,000 to $49,000 in earnings (it depends on how many kids they have), to higher-income middle-class families. That makes it less of a pure anti-poverty program, but it helps non-poor but still struggling families who could use some assistance, and whose support helps ensure the program’s political survival in the future.

Second, neither the EITC nor (obviously) the child tax credit does much of anything for workers without kids. The maximum EITC for single people is $519 in 2018, compared to $5,716 for families with two kids. The LIFT Act would bring childless people up to $3,000 in benefits.

That’s perhaps the least controversial aspect of the bill. For years, policymakers have issued proposals to expand the EITC to childless adults, or to adults who aren’t their kid’s custodial parent. A recent randomized trial conducted in New York City found that increasing the EITC to $2,000 for single people substantially reduced deep poverty and encouraged employment.

Problem one: excluding the poorest

That last point — increased employment — is one reason even Republicans have sometimes supported the EITC, and why some lefties are critical of the program. The phase-in to the EITC and CTC functions as the opposite of a tax: It directly incentivizes people to work more. If you support work for its own sake, that’s great! But it runs a risk of depressing wages by pushing more people into the labor market.

Another reason for the phase-in is political, and unsavory: It prevents the EITC from being a benefit for the non-working poor. America (like Britain, and many other countries) has a long and storied history of stigmatizing non-working poor people, and that has hampered anti-poverty policy on more than a few occasions. Hillary Clinton famously floated and then dropped a plan for unconditional “baby bond” grants to newborn babies in 2007, in part due to backlash against the idea of helping families whose heads of household weren’t working.

The LIFT Act doesn’t challenge this aspect of the tax code. Instead, it introduces a third phased-in tax benefit, continuing the exclusion of people at the very bottom end of the income scale.

This also excludes, for what it’s worth, people with some non-wage income who are struggling, like retirees or disabled people reliant on Social Security. Senior poverty and poverty among severely disabled people are both extremely common, which suggests that a big new cash program like this might want to give them a boost as well. But the phase-in of the LIFT Act benefit is based on “earned income,” which excludes cash benefits like those. It’s strictly a plan for people with jobs and earnings, who only make up about a quarter of people in poverty in the United States. Those people’s children would benefit, but children with non-working parents wouldn’t.

There’s a relatively simple fix to this problem: The LIFT Act could give its $250 to $500 per month benefit to every household under the phaseout limit, without phasing in at all. That would make it less of a work incentive and would increase its price tag. But it would help more extremely poor families, more seniors, and more disabled people.

About a third of people in poverty in America (according to our very imperfect poverty measure) are children, despite children being less than a quarter of the US population. That’s a grim fact, but it makes some structural sense. Parents tend to be in their 20s and 30s, toward the beginning of their careers when their salaries are lower. Children impose heavy costs in terms of food, housing, child care, clothing, and medical bills. So households with children tend to find themselves economically struggling disproportionately often.

Most rich countries have adopted a policy called a child allowance to address this phenomenon. Child allowances are straightforward cash grants to families with kids, and they’re an incredibly effective way of reducing poverty. In 1999, Tony Blair and the Labour Party introduced a universal child benefit in the UK, as part of a broader set of proposals meant to tackle child poverty, and cut the absolute child poverty rate in half from 1999 to 2009.

That’s why I think the most important, and most cost-effective, anti-poverty bill in the Senate right now is Bennet and Brown’s American Family Act. It would cost about half as much as Harris’s bill ($108 billion a year versus $200 billion) and send out:

And despite having half the cost of Harris’s bill, it would lift slightly more people (9.5 million versus 9 million) out of poverty, 5.3 million of whom would be children, compared to under 3 million for Harris’s bill. (Caveat: Those estimates are by two different analysts, which limits their direct comparability a bit.)

My intent here isn’t to pit these two bills against each other. The US can, and I think should, pass both. Lily Adams, Sen. Harris’s communications director, told me that while Harris is not a co-sponsor on the Bennet/Brown bill, “she would be supportive of a bill like that. It’s not that she doesn’t support a benefit for children.” That’s, I think, the right position.

My point, rather, is that all else being equal, it’s more cost-effective for anti-poverty programs to target children, in terms of poverty reduction per dollar spent, and that a better package would include both a universal $3,000-per-adult cash grant and universal $3,000- or $3,600-per-year grants to children.

That kind of blend of Harris’s and Bennet/Brown’s ideas would, in effect, be a very small version of a basic income, albeit one that phases out for upper-income people and falls short of universality. And unlike some popular versions of the basic income idea, this variant would raise spending by hundreds of billions a year rather than trillions, a more reasonable target if you wanted to pay for the spending with tax increases.

Passing either of these proposals, let alone both, would be a massive political lift. Democrats in Congress would spend months sparring over the particulars should they ever retake both chambers and the presidency, and choose to use their time in power to pursue an anti-poverty bill. My main hope is if and when that does come to pass, the bill they produce doesn’t forget either children or non-working adults.

The next Democratic debate is in January — and on a collision course with impeachment
The trial begins for the ex-officer who shot her unarmed neighbor Botham Jean
Kathleen Turner dragged a high-paid actress for having no range. Here’s who it might be.
As the Ukraine probe heats up, Trump and Giuliani are sticking together. Mostly.
Mindfulness meditation in America has a capitalism problem
Elon Musk’s tweet about taking Tesla private has triggered a federal lawsuit