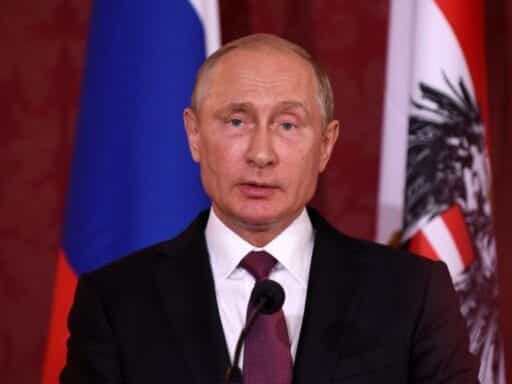 President Donald Trump’s summit with Russian leader Vladimir Putin on July 16 will likely feature discussions about election meddling, the war with Syria, and the North Korean threat. But the most important outcome of the meeting may be something almost no one is talking about: The extension of the New Start nuclear treaty between the United States and Russia.

New Start, which stands for Strategic Arms Reduction Treaty, is an arms control deal that came into effect on February 5, 2011, during the Obama administration. The treaty’s goal, essentially, is to limit the size of the American and Russian nuclear arsenals, the two largest in the world.

It allows Washington and Moscow to keep tabs on one another’s nuclear programs through stringent inspections and data sharing — thereby curbing mistrust about each other’s nuclear and military plans.

The treaty is currently in effect until 2021, but there’s an option for the leaders of both countries to extend the accord up to five years. If the treaty expires in three years, though, both sides lose crucial information about each other’s nuclear programs.

Whether Trump and Putin will ultimately agree to extend the nuclear agreement is unclear. A spokesperson for the National Security Council told me “We are open to discussions regarding the extension of New START but no decisions have yet been made on how to proceed.”

During their first phone call back in February 2017, Trump rejected Putin’s proposal to extend the arms treaty, saying it was a bad deal for the United States.

Trump’s National Security Adviser John Bolton is also a longtime critic of the accord, once calling it “unilateral disarmament” by the United States. In fact, three sources familiar with their conversation told me that Bolton was “very upset” he had to discuss extending the agreement when he spoke to Putin last week.

Putin remains interested in extending New Start, and the fact that Bolton discussed the issue with the Russian leader signals an agreement to extend the accord could be possible.

“Extension at this time is really no skin off Russia’s back,” says Evelyn Farkas, a former top Pentagon official working on Russia, Ukraine, and Eurasia. “It helps them look like good guys and cooperative while trying to shed their rightfully acquired bad-guy status.”

If the two leaders do agree to extend the nuclear agreement, though, it’d be a big deal and an unabashedly good thing for both countries, experts say. That’s because right now the US and Russia are increasing their nuclear arsenals, making this a particularly tense time.

“Russia and US are essentially in an arms race,” says Laicie Heeley, a nuclear expert at the Truman National Security Project. As of now, the US plans to develop newer and smaller nuclear bombs, in part to make them more usable. Putin, meanwhile, has announced plans to create an “invincible” nuclear-tipped missile that can evade any of America’s defense systems.

New Start doesn’t limit the creation of those kinds of weapons, but it would still place some caps on the most powerful ones both countries have.

“It would be an easy win for Trump at a time when there’s concern he might give a lot in a summit meeting with Putin,” says Kingston Reif, a nuclear proliferation expert at the Arms Control Association. “It ought to be a no-brainer.”

What New Start actually does

There are a lot of esoteric and wonky elements to this treaty, but what you really need to know is what it limits in 2018 for both the United States and Russia:

A State Department official told me that “both sides are in compliance with the treaty,” as this Arms Control Association chart on nuclear warheads numbers for both countries shows:

How many deployed nuclear warheads have the U.S. and Russia eliminated under the #NewStart Treaty? #BytheNumbers

But that’s not all: Both countries also provide each other with data on the state and movements of their nuclear arsenals every day. For example, if Russia moved a warhead off a missile and into a facility for repairs, Moscow would tell the State Department’s Nuclear Risk Reduction Center about that. The US and Russia have exchanged about 15,700 notifications since 2011.

Each country is also allowed 18 inspections of the other’s nuclear facilities a year. That allows US and Russian officials to ensure the data each country receives is correct.

The reason for all of this is straightforward: During the Cold War, Washington and Moscow had relatively little information about what the other was doing with their nuclear arsenals. And while intelligence agencies can also obtain information, the treaty allows for much of it to be in the open. That only helps both countries build trust with one another and reduces the chance for misperception and a possible nuclear war.

If Trump and Putin don’t extend the treaty by February 2021, it would no longer be in effect. And if that happens, Washington and Moscow would lose a vital way to check on the other’s nuclear programs — which could lead to potential problems down the line.

“It could get us back to a point, like in the middle of the Cold War, where we’re thinking ‘Oh my God, they’re building something crazy’ when perhaps they’re really not,” Heeley told me. ”We don’t want to find out what a world looks like that doesn’t have this treaty in it,” she continued, “it could only make things worse.”

The US and Russia are in an arms race

The irony to a possible extension of New Start is that both countries currently have plans to increase other aspects of their nuclear arsenals.

“US and Russia arms control is under significant strain,” says Reif.

The Pentagon released its Nuclear Posture Review in February, and it outlined three key things that surely caught Moscow’s attention.

First, America now wants to develop more low-yield nuclear weapons. Because these nuclear bombs are smaller, there’d be fewer impediments to using them, per the administration’s argument.

Second, the review leaves open the possibility for the US to consider responding to devastating cyberattacks against the homeland with a nuclear bomb.

And finally, the Defense Department specifically called for America to match Russia’s improving nuclear arsenal. As of last June, Russia has around 300 more nuclear warheads than the United States.

Russia’s advantage worries some nuclear experts. “If we find ourselves in a new nuclear arms competition with Russia, they may have a significant head start,” Matthew Kroenig, a nuclear expert at Georgetown University, told me.

Moscow, meanwhile, plans bold enhancements to its nuclear arsenal. During a March 1 speech just a few weeks before Russia’s presidential election, Putin announced an initiative to create three new weapons: a cruise missile, powered by nuclear technology, that can reach the United States; nuclear weapons that can evade any missile defense system; and unstoppable drone submarines that can be used to blow up foreign ports.

Experts told me that the most impressive new weapon Putin described was the nuclear-powered cruise missile that can hit any point on Earth. (That’s big: Conventional cruise missiles rarely travel more than 600 miles.) That kind of weapon moves so quickly and flies so low to the ground that it could evade US and European missile defense systems and hit intended targets with a nuclear weapon.

Putin said the new technology would render American missile defense “useless,” but US officials still say it needs further testing and is not yet operational.

New Start doesn’t prohibit any of this. That treaty focuses on longer-range missiles, launchers, and bombers. Low-yield nuclear bombs or cruise missiles don’t fall under that agreement.

But that fact is part of why experts think extending the New Start treaty makes sense: It shows some progress toward limiting the ongoing, and dangerous, arms race at relatively low cost.

“It’s the smallest, most significant step the US can take to keep the relationship going and the nuclear relationship safe,” says Heeley. “Arms control treaties feel useless until they’re not there, and then you miss them.”

Trump is heading to Walter Reed hospital “for a few days”
Rep. Seth Moulton unsuccessfully tried to oust Nancy Pelosi. Now he’s running for president.
Elizabeth Warren calls for Trump’s impeachment
A new study shows that even the poorest immigrants lift themselves up within a generation
Why coal power is now an economic loser around the world
Lovecraft Country’s first trailer teems with monsters, genre subversion, and social allegory