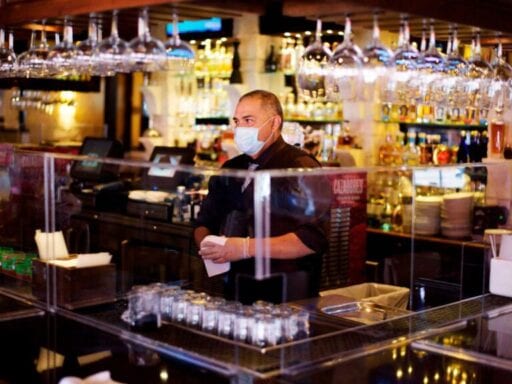 Share
Loading...
A bartender wears gloves and a mask while taking orders amid the coronavirus pandemic on May 1, 2020, in Houston. | Mark Felix/AFP /AFP via Getty Images

“We managed to disrupt our economy [and] skyrocket unemployment, and we didn’t control the damn virus,” one scientist says.

One month ago, I asked epidemiologist Tara Smith if she was worried about states loosening their stay-at-home orders, despite most not meeting the government’s criteria for doing so.

“I am really fearful that by June 1 or June 15, after we’ve seen a couple weeks to a month of this [state reopenings], that our cases are going to be climbing,” said Smith, a professor at at the Kent State University College of Public Health.

Well, here we are. It’s June 12, and Covid-19 hospitalizations are rising in Arizona, the Carolinas, Utah, Arkansas, Texas, Tennessee, and perhaps Florida. Those states are also seeing higher numbers of positive Covid-19 tests, as well as increases in the percentage of tests that come back positive. This indicates that the higher case counts aren’t simply due to more widespread testing finding milder cases.

Call it a reopening backfire. But really: No expert thought that reopening this quickly was going to work in the first place.

“This is totally predictable”

Many states opened up in early May, hoping the economy would recover while a winning battle against Covid-19 continued apace.

Unfortunately, it’s now clear that in the areas where the virus has come roaring back, few gains against it were made in the last month.

The 7-day average of new cases has been between 20-23k cases for nearly a month. But the outbreak has shifted south and west. pic.twitter.com/Rk6zPi1mV0

“This is totally predictable, and there have been many warnings,” Sarah Cobey, an infectious disease modeler at the University of Chicago, says. “We’re seeing undeniable signals that prevalence is truly increasing in many states.”

Reopenings have led to more transmission, quite simply, because more people are coming into contact with each other while there’s still a lot of virus around. Mask use is inconsistent, and even when worn properly, is not 100 percent effective at preventing transmission.

In Arizona, nursing and long-term care facilities are still hotbeds of transmission. “In Arizona, one in three nursing homes has had a case of Covid-19,” Vox’s Umair Irfan reports.

Most concerning, Cobey says, is the increased hospitalization rates in these states — a reminder that this virus can be very severe and deadly for some, and that deaths could soon climb too. “It’s a lagging signal, so what it’s really telling us is how transmission rates were changing closer to two weeks ago,” Cobey says. “This implies that unless behavior —the primary driver of transmission — has changed in the meantime, the situation will continue to worsen for another few weeks.”

How bad might the situation get in Arizona and other states? We don’t know yet. It might not be a disaster. These states could avoid the worst-case scenario of hospitals being overwhelmed, and keep the epidemic curve from spiking to uncontrolled levels. Still, though, more cases means more deaths — some of which could have potentially been avoided.

Overall, though, the trends are not moving in a good direction, and we have yet to see the full Covid-19 consequences of reopening.

Not every place that’s re-opening is seeing spikes. Scientists aren’t sure why.

Georgia was one of the first states to reopen businesses, like barber shops, on April 30. Since then, its Covid-19 cases have more or less remained flat.

“Why didn’t Georgia go through the roof? And the answer is, ‘we don’t know,’” Shaman said. The pandemic is “a real patchwork” in America, he said.

Similarly, Smith says she is “a bit surprised that Ohio is doing as well as we are since reopening.” It’s a state where armed protestors showed up to the statehouse for three weeks, not wearing masks, to demand that the governor allow businesses to reopen. “We don’t have all the data right now to determine why some [areas] have increased and others have not,” she says. It could come more down to how individuals are behaving (are they wearing masks, for instance), than a broad state policy.

It’s important to remember: Though scientists can’t precisely predict which areas will be hardest hit by Covid-19, they do understand the conditions under which the virus thrives.

The main ingredient that leads to increased cases is more people in close contact with one another out in public. “I believe the increases we’re seeing in places like Arizona are likely the results of easing social-distancing restrictions too soon,” Eleanor Murray, a Boston University Epidemiologist, says.

These new spikes in cases appear to be occurring in places that largely have avoided the worst outbreaks of coronavirus so far. But it’s important to remember even hard-hit places like New York City could still see new waves of infections. There are still so, so many people who are not immune to the virus out there.

Is this a “second wave”?

Overall, in the US, cases have been slowly dropping. But a lot of that is due to the initial huge crisis in New York subsiding, obscuring the emergence of new hotspots.

Nationally there’s no “second wave.” There’s one long wave. We’ve been in a plateau of around 20,000 cases and 1,000 deaths a day, largely among minority and vulnerable populations. Reopening will cause spikes, but calling them a second wave denies the reality of what’s going on. pic.twitter.com/ivutKKYgF9

But “waves” might be the wrong metaphor to describe what’s going on.

I instead imagine a bunch of nuclear reactors spread out across the country. Control rods have been taken out in many of these reactors, without being replaced by new controls, and the reaction grows. This disaster is maybe more like Chernobyl, and less like a tsunami. It’s our actions — both collective and individual — that determine the results.

Ultimately, there’s no quick, snappy metaphor that really gets at the complexity of how the virus spreads. But at the same time, the story is simple: When you don’t do enough to stop people with no immunity from getting an infection, infections occur.

Experts never said that eternal lockdowns were the only choice we had to combat the pandemic. They argued that once areas got initial case spikes under control thorough widespread social distancing (with new cases decreasing over at least a two-week span), that a new phase of control should begin with widespread testing and contact tracing. The initial lockdown period avoided the worst possible scenario, but the US didn’t use that time to prepare for managing the pandemic into the future. And now, we’ve wasted the weeks since reopening.

“As prevalence rises, the demands on contact tracing increase too because there are more cases to track,” Cobey says. “At some point it becomes more practical for governments to institute blanket interventions to reduce prevalence.”

That is: We may have no choice but to enter lockdowns again. The scary thought: What if states or businesses aren’t willing to do it? How many people will die? How many hospital systems will be overwhelmed?

Too many communities and states “are acting like we’re done with it,” Shaman says, of the pandemic. “And we’re nowhere near done with this.”

Progressive groups are “fed up” with Biden’s infrastructure playbook
SNL’s cold open spoofed the Super Bowl preshow — and the game’s awkward ads
Trump’s top Middle East peace envoy is quitting. There’s still no Israel-Palestine deal.
A new study shows that even the poorest immigrants lift themselves up within a generation
House Democrats say migrants aren’t getting fair hearings at tent courts on the border
Trump wants everyone to know he is extremely calm and Pelosi is the “crazy” one