The Predator is a movie hurt by controversy — and by editing 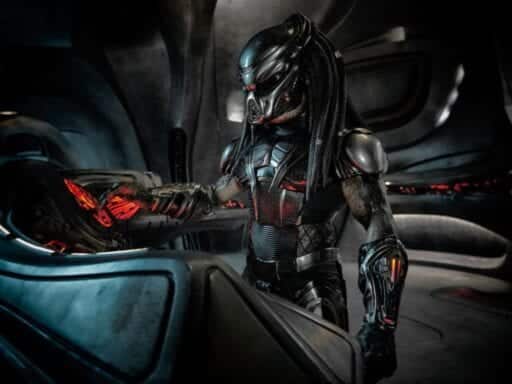 The casting of a sex offender led to even more haphazard editing in a movie overstuffed with bad trims.

Everything you need to know about writer-director Shane Black’s new spin on the alien huntsman known as The Predator is contained in Sterling K. Brown’s sunglasses.

At one point in the film, Brown, who plays a government agent named Will Traeger, enters a mysterious structure, which just might be of alien origin. As he first steps inside, you can see his eyes, but a few seconds later, the next time we see him onscreen, he’s wearing sunglasses. It feels like the setup for a payoff that never comes.

Does he know there’s going to be a bright light in here? you might ask, or Does he know the Predator won’t kill someone in shades? But, no, he’s mostly just wearing sunglasses, and it’s neither clear where he got them or when he put them on.

Now, obviously, I can fill in the gaps between shots for how Will pulled sunglasses out of his pocket and put them on while the camera was focused on something else. A movie doesn’t need to hold the audience’s hand every step of the way, especially when it comes to something so mundane as putting on sunglasses, a behavior that most viewers will be familiar with.

Nonetheless, the moment stuck in my craw just a little bit, because it exemplifies, I think, where The Predator goes wrong in a way that bugged me. I love Black’s other films (which include the effervescent Kiss Kiss Bang Bang and the hugely underrated Iron Man 3), and he’s perhaps the best writer in Hollywood at capturing the way guys wish they talked when they’re casually busting each other’s balls.

But The Predator escapes him just a little bit, despite a valiant effort. And most of the answers lie in the movie’s editing, in how what feels like crucial information is just left on the cutting-room floor. And that’s to say nothing of one big, glaring edit, made because Black hired a sex offender friend to work on the film without telling his cast (about which more in a bit). Throughout, The Predator feels like it’s been cut to the bone, in a way that ultimately requires viewers to make tiny little leaps to keep up, and all those tiny little leaps eventually add up to a big, big gap between viewer and film.

The Predator movies aren’t so much a franchise as they are movies that feel like they could be a franchise if somebody cracked the code. Ostensibly, they’re similar to the Alien films, in that they feature a vicious alien who wants nothing more than to kill the humans it comes into contact with. And if Alien’s particular blend of sci-fi and horror has been so successful, well, why not this one?

The Predators of these films are intergalactic sport hunters who travel the cosmos to track down the most dangerous and intelligent species on other planets. They kill them, then tear out their spines. And in the first one, 1987’s terrific little thriller Predator, they clash with a unit of commandos led by Arnold Schwarzenegger, resulting in a surprisingly intimate movie about intergalactic sport hunters trying to kill the most famous muscleman in cinematic history. (Fun trivia note: Shane Black himself plays a supporting part in the ‘87 Predator.)

Future Predator movies tried. They really did. Predator 2 (1990) brought the Predator to Los Angeles and flamed out at the box office. Future attempts to reboot the franchise often relied on the lore from the comic book series Alien vs. Predator, which pitted the two extraterrestrial species against each other, then spawned a couple of its own films. (Neither of the two Alien vs. Predator films is very good.) And in 2010, the franchise-that-might-be got another shot with Predators. (I haven’t seen that one, but reviews suggest it’s mediocre.)

Predators made just enough money at the box office to suggest that making more movies about the Predator wasn’t the worst idea in the world, but it didn’t make nearly enough to justify spending a ton of cash on the endeavor. Enter Black, whose knack for witty banter and dude camaraderie would theoretically be just the thing to keep the film moving when the Predator wasn’t onscreen.

In the new movie, Black works overtime with co-writer Fred Dekker to find ways to tie the previous Predator films into a larger mythology that would explain why the Predators keep showing up on Earth, beyond wanting to kill us. And when it comes to the monster itself, the film turns to the oldest rule of sequel-making: Bigger is always better.

But sadly, The Predator is a slowly deflating balloon, and the reason comes back to those sunglasses. All movies deserve the benefit of the doubt from the audience when it comes to little leaps of logic. But the bigger the leap, the more the audience needs to catch up. We may not blink when a character puts on sunglasses offscreen. But when a bunch of characters showed up at a key moment near the beginning of this movie, suddenly driving an RV, I frowned for a second. Wait, I thought. Where did they get the RV?

This is the sort of bigger leap that a movie can really afford one or two of, and even then, only if it happens early on. But the first two-thirds of The Predator are positively littered with these leaps of logic, where the editing abruptly fast-forwards past all sorts of context and trusts you to keep up. None of these leaps is fatal in isolation; taken in aggregate, they made me feel as if I was repeatedly dozing off and missing key bits of information.

The real frustration is that when Black just lets his characters hang out and shoot the shit, the movie is a lot of fun. It’s full of great actors like Trevante Rhodes (the oldest Chiron in Moonlight) and Keegan-Michael Key (of Key & Peele fame), and Black has given them some great dialogue to bounce off of each other. (A recurring riff about how, technically, the Predator is a hunter and shouldn’t be called “the Predator” made me laugh several times.) Sure, lead actor Boyd Holbrook comes off as a kinda-bland white guy surrounded by more interesting actors of color (as he was on Netflix’s Narcos), but I liked him here way more than I ever did on Narcos!

And once the movie finally gets to the part where the Predator is stalking characters through the woods (which was apparently heavily reshot), it manages some solid action beats. But in the end, the overall film feels haphazard, like it’s careening wildly down the street, shouting information at you and hoping you can keep up, all thanks to its awkwardly edited leaps of logic.

And the worst edit in the movie has everything to do with the other big problem with The Predator.

The Predator’s lead actress is Olivia Munn, the sort of performer who’s equally adept with gunplay and wordplay and thus the sort of performer who tends to shine in a Shane Black production. (The other woman of note in the film is Yvonne Strahovski, who gets incredibly short shrift.) But when Munn drops into the movie, it’s as if she just arrived out of nowhere. She’s standing on a sidewalk, looking vaguely concerned, before a government official asks her to join him at a secret base.

So far as I can tell, this awkward introduction to the movie’s female lead is thanks to what appears to have been the removal of a scene featuring actor Steve Wilder Striegel playing a jogger who hits on Munn’s character, to her disgust. It’s the sort of simple introduction Black often affords his characters, where they reveal themselves via dealing with some petty annoyance or another.

But Striegel, a friend of Black’s, was convicted in 2010 of attempting to pursue a sexual relationship with a 14-year-old. Black has since claimed that Striegel misled him about the nature of the offense, and the Los Angeles Times has more on the case. (It’s also worth noting that The Predator also stars underage actor Jacob Tremblay, though he would not have shared a scene with Striegel.)

The long and short of it is that Munn found out about Striegel’s conviction, rightly took umbrage with his casting and with not having been informed of his history prior to filming with him, and alerted studio 20th Century Fox to the presence of a sex offender in The Predator. The scene was cut shortly before the movie’s debut at the Toronto International Film Festival.

Everyone involved has insisted that axing the scene didn’t shortchange the film in any way, but just taking a look at how Munn seemingly airlifts into the movie out of nowhere should disabuse anyone of that notion. This is the female lead of the movie not getting any moments of necessary character setup.

Munn is good enough — and Black gives her enough solid moments later on — that she eventually cobbles together a character without the setup that might otherwise seem necessary, but she’s still playing at a disadvantage when compared to all of The Predator’s male characters, who get the requisite pithy setup and great jokes that stand in as introduction. She’s shortchanged, when the movie’s climax really needs her to be one of the film’s best developed characters, period.

Of course, there are far larger concerns with this situation than whether the resulting movie is good, like the idea that a director tossed his sex-offender friend a small role and nobody figured it out earlier. But the fact that the resulting edit, made so quickly and carelessly, hurts the overall film is indicative of how it feels slapped together everywhere else as well.

For every cool little idea or image Black comes up with — like a kid going trick or treating in a Predator mask, or the grisly end of two best buddies who run afoul of the Predator — there are so many others that feel like they were thrown in arbitrarily, in distracting ways. (My “favorite” example is an insert shot of a dog that seems to have nothing to do with anything, but which kept making me hope that a dog was going to get involved in the hunt for the Predator.)

What’s wrong with The Predator goes deeper than a couple of bad cuts, but it still stinks that a promising movie was scuttled by a director’s questionable decision-making — both on set and in post.

The Predator opens in theaters Friday, September 14. And, just so you know, I’ve always thought the Predator looks a little silly when he takes off his mask. Just saying.

Congress might finally have a deal to stop surprise medical bills
House Republicans release their impeachment inquiry witness wish list
Birthright citizenship, explained
What America can learn from the fall of the Roman republic
Trump decries “political violence” at rally, then attacks the media and Democrats
Is Gordon Sondland still covering for Trump?