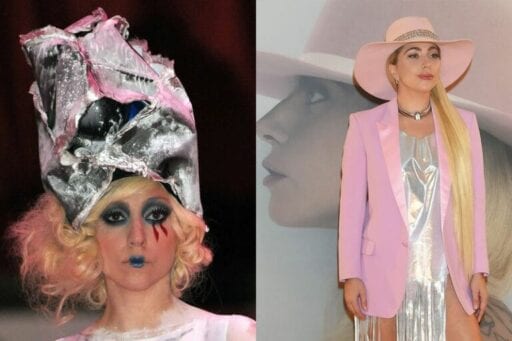 “It” refers to the tiny bit of makeup Gaga was wearing at the screen test for what became her starring role in the latest reboot of A Star Is Born, according to a widely circulated story in the LA Times.

The story, which has now been repeated by its stars several times and elevated to lore in only a few short weeks, goes like this: During the screen test, Cooper, who is the producer, director, and lead actor in the movie, whipped out a makeup wipe and dragged it down Gaga’s face from forehead to chin. He then told her, “Completely open. No artifice.”

This narrative thread continued this past weekend, when Gaga and Cooper went on The Graham Norton Show in the UK. There, she told a tale about trying to sneak some makeup onto the set, according to the Evening Standard, “but Bradley wouldn’t go for it.” Cooper apparently jumped in and said, “It’s how the character is.”

Gaga’s character, Ally, is an unknown singer-songwriter who has pretty much given up on her dream to be a performer. She is also plagued by self-doubt because of her appearance. This no-makeup story has been getting so much attention in part because Lady Gaga has built her persona — multiple personas, really — using props that are sometimes purposely jarring. Makeup, wigs, shoes, facial prosthetics, a giant egg, and, yes, a meat dress have all been part of her repertoire. She likes to challenge what we consider norms for women’s looks and fashion, so seeing her with her natural hair color and no makeup is jarring in a different way.

But does not wearing any makeup mean a woman is more authentic? It appears to be what Cooper and his character, Jackson Maine, both believe. In fact, it’s what a lot of people believe. As a society, we claim to value what’s “natural” when it comes to women and their looks, but when you dig a little deeper, that’s not really what we want. We want them to look beautiful without any intervention at all, which is an unachievable goal considering that society’s idea of what is beautiful is so narrow: young, skinny, conventionally pretty, light-skinned. It’s impossible for women to win, so celebrating Gaga’s makeup-free face as the ultimate sign of her authenticity is more complicated than the sound bites would have us believe.

A star is born … without makeup

Let’s unpack this Bradley Cooper makeup removal situation a little bit more: 1) Why the hell was Cooper carrying makeup wipes on his person? 2) Did he give Gaga the opportunity to cleanse her face properly, at least? Makeup wipes are not great for the skin! Next time you invade someone’s personal space to impose your beliefs on them, please offer them an oil or a gentle cleanser instead, Bradley.

All kidding aside, the reaction to this moment has been decidedly mixed. While some thought it was sweet, it was also perceived to be paternalistic or downright controlling. Nylon deemed it “weird as hell.” In a piece for NBC, Jennifer Gerson called it another example of someone policing women’s looks. Daily Beast entertainment reporter Kevin Fallon called it “gross and creepy” on Twitter.

The incident was repeated ad nauseam throughout the entertainment and popular press. It may have been a calculated anecdote because, as some pointed out, the 1954 version of A Star Is Born, starring Judy Garland. featured a scene in which her male co-star James Mason removes her makeup (using a nice-looking cold cream, I’d like to point out):

I need to say this. To everyone – including entertainment media – falling all over Bradley Cooper wiping makeup off Lady Gaga to see her real beauty in audition for #AStarIsBorn – you do know that’s a scene out of the 1954 film, right? @tcm #TCMParty pic.twitter.com/4lG3s9qUHG

To be fair to Cooper, he ostensibly did this because that’s what he envisioned the character of Ally to be; he is hopefully not in the habit of whipping out makeup wipes on unsuspecting women at random red-carpet events. (But I’d also like to point out how he was not willing to be “completely open” himself, at least on the press junket, as this cringeworthy interview with Taffy Brodesser-Akner at the New York Times demonstrates.)

And, importantly, Lady Gaga was on board with it. She said ditching the makeup helped make her a better actor, helped her inhabit the role. “It put me right in the place I needed to be, because when my character talks about how ugly she feels — that was real. I’m so insecure. I like to preach, but I don’t always practice what I preach,” she said in the LA Times interview. Gaga has publicly stated that she’s been plagued with doubt about her own attractiveness since the beginning of her career and has addressed it on many occasions. For many women, makeup imparts confidence, and the vulnerability of a bare face is real.

In case you are not aware of Gaga’s extensive beauty canon, she loves makeup and uses its transformative power masterfully. She has been working with makeup artist Sarah Tanno for almost a decade, and the two have collaborated on some of the most clever and unique makeup looks in recent memory. They make art together. The looks are not natural — metallics and sequins and bright eyeliner figure prominently. Gaga’s signature look is that she has no signature look. She is also working on a makeup line of her own, called Haus of Beauty, as Recode reported in July.

In the movie, Gaga starts out makeup-free and her character later dyes her hair red and piles on more cosmetics. Cooper’s character pushes back against this pop star-ification, arguing that she is losing her authenticity. This is the opposite of Gaga’s career trajectory; she started out embracing full-on caricature, and toned down her visual statements a lot with her most recent Joanne tour, taking on a folksier image (including lots of floppy hats).

Which brings us back to the idea of authenticity. Gaga isn’t the only big pop star who changes her looks frequently and unabashedly uses makeup to craft a persona. Three of arguably the most authentic performers on the planet — Dolly Parton, Rihanna, and Cher — do as well. Cher and Parton have also been open and unapologetic about their plastic surgery.

Their characters and messages have been consistent through their careers, and surely most people would agree these three are not fake or superficial when it counts the most. But we still somehow think makeup means you’re faking something, conflating fake color on someone’s face with a superficial personality. Real authenticity, however, is intangible.

Of makeup and authenticity

Cooper’s use of the word “artifice” in the LA Times interview is very telling, because associating makeup with artifice advances the narrative that women who wear it are trying to trick people.

It’s an idea that’s been around for centuries. An unattractive woman uses makeup or other sneaky methods to fool a man into thinking she’s attractive, thus snaring him forever. Micaela Marini Higgs detailed this history and mindset for a Racked story in 2017:

The use of womanly wiles and feminine trickery have been blamed for many things since the Garden of Eden, and makeup is seen as an extension of this inherent dishonesty. Women, we imagine, are willing to lie to get what they want, even if that involves trapping men through the long con of contour and lipstick.

There have been more insidious examples of this recently. In 2017, a man released an app called MakeApp that allows users to “remove” women’s makeup in photos. It was roundly panned as sexist. Heather Schwedel wrote at Slate, imagining its founder’s mindset, “Why not expose the dastardly tricks these harpies are using to disguise themselves? Makeup: It’s basically witchcraft.”

In its most current sinister iteration, the idea that makeup equals deception is something that incels, or “involuntary celibates,” believe. These bitter young men believe they are being harshly and superficially judged by women, because they themselves judge women that way. “They are obsessed with female beauty but despise makeup as a form of fraud,” Jia Tolentino wrote at the New Yorker.

In the movie, Cooper’s male gaze reigns supreme. If you have seen the trailer 87,000 times, or even just once, you know that he tells Gaga’s character Ally he thinks she is beautiful. That moment when he is driving off in the car and hollers out to her because “I just wanted to take another look at you” has become a meme. She does indeed look incredible without makeup in the movie. But we, the audience (and presumably Ally), are supposed to finally believe it when Cooper says it.

The artifice of no-makeup makeup

The idea that a woman without makeup is a woman in her ideal form has found its way into the biggest makeup trend of the last decade: “no-makeup makeup.”

At Meghan Markle’s wedding to Prince Harry in May, her makeup was light and natural. Her freckles were visible. Her lips looked like her own lips. Prince Harry “kept saying thank you. He was thanking me for making her look like herself,” Markle’s makeup artist Daniel Martin told InStyle. Elle UK estimates nine products were used on her face. It was no-makeup makeup.

Google the phrase and you’ll get more than a billion results. Look it up on YouTube and you’ll find hundreds of tutorials. The fact that one might require a tutorial to nail this look tells you everything you need to know about it. This trend is the real scam, not women wearing red lipstick and black eyeliner. You need upward of a dozen products to get the look popularized by Kim Kardashian:

Concealer Kits and individuals are all restocked now and available on KKWBEAUTY.COM #ConcealBakeBrighten

Women have been wearing makeup since before Queen Elizabeth I slathered her face with lead to cover up her smallpox scars. They do it for a lot of reasons — because of societal pressure to cover up “imperfections,” as a way to express individuality, or just plain boredom with their natural lip color. Insisting that a woman’s authenticity can only be revealed by revealing her bare skin is a disservice. Gaga said herself at a press event that not wearing makeup brought out vulnerability in “someone that doesn’t necessarily feel safe [being] that vulnerable all the time.” Why is this the ideal?

In an interview for Vogue’s October issue, in which Lady Gaga appears on the cover wearing a “natural” makeup look, the author notes, “The biggest challenge for Lady Gaga was creating a musical character that was not like … Lady Gaga.” The irony here is that the “authentic” Lady Gaga we see in A Star Is Born is a fictional character. The real Gaga — fake eyelashes, stick-on gems, and all — is authentic as hell.

America is still failing on coronavirus testing
What the 2020 candidates’ merch says about their campaigns
Bob Woodward withheld his Trump revelations for months. Was that wrong?
Run the Jewels’ new album is shocking, funny, relentless — and 2020’s most required listening
5 winners and 4 losers from the last night of the Democratic convention
Italy’s plan to drastically relax social distancing is a “calculated risk”