The problem with Trump’s “reality show” pictures, according to Obama’s photographer 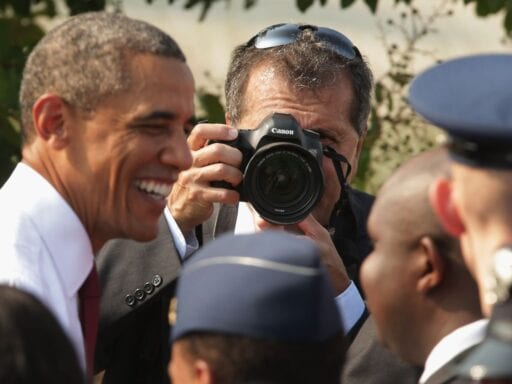 Share
Loading...
Pete Souza photographs President Barack Obama in 2013 as he greets family members of the victims and survivors of the 9/11 attack on the Pentagon. | Chip Somodevilla/Getty Images

Pete Souza on authenticity, his new documentary, and recording the presidency for history.

Pete Souza has worked for two presidents, and he took some of the Obama administration’s most iconic photographs, but most people who’ve heard of him know him from Instagram. In the wake of President Trump’s 2017 inauguration, Souza began sharing photos from his days in the White House, usually showing President Obama behaving in a way that was diametrically opposed to something that Trump had done that day, with a sly caption.

POTUS with a peach as opposed to an impeached POTUS.

They competed against one another during the 2008 Presidential election. And yet they respected each other. As politicians. And as human beings. President Obama would certainly never have tolerated a deplorable comment against John McCain by a commissioned officer on his staff.

46 minus 1 continues to spew out falsehoods on Twitter (no surprise there). Here are the facts: Robert Mueller was named FBI Director in 2001 by President George W. Bush and confirmed by the US Senate for one 10-year term. President Obama extended Mueller’s term for an additional two years. In 2013, President Obama nominated James Comey to replace Mueller as FBI Director (this picture was made during that announcement). Comey was confirmed by the US Senate for a ten-year term, until he was fired by 46 minus 1 last year because…well, you know, that Russia thing. #throwshadethenvote #TheTruthSquad

Souza recently relied on that same sensibility to compile a book called Shade: A Tale of Two Presidents. Each two-page spread features a tweet by Donald Trump on one page, followed by a photo of Obama, with a caption, on the facing page. And in Dawn Porter’s new documentary The Way I See It, which centers on Souza’s work and how it has shaped his view of the presidency, Souza talks about how the idea occurred to him to start juxtaposing Trump and Obama on Instagram. He also discusses his time in the White House, explains his view of the duty of a White House photographer, and recalls key moments in Obama’s presidency as seen from his unique perch.

Souza says in the documentary that he hadn’t always thought of himself as particularly political. (Prior to working for Obama, his first White House job was to photograph Ronald Reagan, whom he says he disagreed with politically but speaks of a bit more fondly as a person.) Once Trump took office, he felt his outlook changing. He grew concerned about the direction of the presidency for a number of reasons, one of which is that he sees the current president as lacking in a kind of fundamental empathy and humility that’s necessary to do such a difficult and consequential job.

I spoke with Souza by phone just before The Way I See It premiered as part of the Toronto International Film Festival, ahead of its US release on September 18. We talked about the power of the still image, why the Trump administration struggles to create iconic photographs, and what he’ll tell the new White House photographer if Joe Biden wins the election.

At one point during The Way I See It, you say that you prefer still images to moving ones because a photograph has a different kind of power from a video.

The still image sears in your brain in a way that video doesn’t. We can all conjure up iconic images — they’re always there. The shooting at Kent State. Some of the Vietnam pictures. Nixon waving goodbye after his resignation. You can’t ever forget those images, the still images, and I just think they’re more powerful, and last longer, than a video.

And you can put them in a book.

You can put them in a book!

The new documentary also covers the time you spent working as a photographer in the Reagan administration, and I know one thing that marked Reagan’s White House is that the cameras were always rolling, too. Did that experience have an effect on how you thought about the power of the presidential photograph?

It shaped my belief that visually documenting the presidency for history is important.

The ’80s were a different time. Even with the news magazines, if they were doing a big story on Reagan, the magazine’s photographer assigned to the White House would request 15 minutes with the president and orchestrate the photo. Set up lights. “You do this, Mr. President.” That was just the way it was done during the ’80s.

To me, the most valuable photographs I made of Reagan were the fleeting moments, the authentic moments — and many of those were never published during his presidency. To me, that was a mistake on the administration’s part, to not show Reagan as a human being, somebody who’s vulnerable but also quite playful behind the scenes. I don’t think people got the full picture of Reagan. I mean, it was a different time. There wasn’t any internet or social media, so there wasn’t an easy means to get those photographs out, but at the same time, I think the administration was overly protective of Reagan’s image.

One risk with photographs of public figures is that people will look at the photo and supply the context themselves, even if the context is wrong. The meaning of the photo can change depending on who’s looking at it. Do you think about that risk while you’re taking the photos?

No, I’m not thinking about it, but I think it is interesting. As I said, the approach that I took was to make authentic photographs — and fortunately, when I published my book I was able to add context to it. But it’s interesting. There’s a guy who runs a nonprofit called Reading the Pictures, Michael Shaw. During the Obama administration, he would always analyze my pictures and add context. That just kind of blew my mind, because the things he was talking about played no part at all in a) making the photograph in the first place and b) making it public.

Then, Michael and I did a talk at Photoville in 2017, I think. And it was pretty fun to do because with so many of the photos he was talking about, I thought they were off the wall. But at the same time, everybody brings their own background and biases into looking at a picture. It makes you stop and think more about the carefulness that you might have before you make a photograph public.

This has been discussed a lot lately with Black Lives Matter and certain photos, how they’re viewed by the public. It’s an interesting time right now for that, with everything else that’s going on in the country.

It seems like one challenge with shooting people who are public figures is that they never really have a private moment — they don’t really “own” their image in the way that a private citizen does. Does that bring any challenges in thinking about how to show the moments where they’re most “human”?

That enables me to make these really revealing pictures that help show what Barack Obama and Ronald Reagan were like as human beings. They’re such fleeting moments, and they’re often intimate and very personal, and I think it shows the value of having an official photographer to capture those moments for history. I really do.

Yeah. I think that the Trump presidency is a reality show, by and large. Even if there’s a cabinet meeting, it’s not really a meeting. It’s an hour-and-a-half session, with the entire press corps present, [in which the officials are] trying to make Trump look good. Everybody goes around the table, and they say all kinds of positive things, and there’s no constructive dialogue taking place. It’s as if we’re living in the 1950s, where the photographs are like ribbon-cuttings.

The only real authentic pictures I’ve seen of the Trump presidency — when I say “authentic,” I mean a behind-the-scenes image that makes you say, “Wow, that’s a telling image” — was the picture of Nancy Pelosi in the cabinet room, standing up, pointing her finger at Trump. I look at that picture and I’m like, “What a badass Speaker of the House. She’s standing up to the president. How does that picture get out? How did it get out to the public?” Trump himself tweeted it out because he thought it made him look good.

Different people look at pictures in different ways; I don’t know that there was anybody in America that thought that picture made Trump look good. Yet, he thought it did. That was a really revealing picture in particular, which we have not really seen before or since.

And you also wonder what people will think when they see that photo in 50 years!

You started posting on social media following the end of your White House term. You became Instagram famous, and then the book grew out of that. Having gone through that experience, what do you think will change when we eventually have a president who grew up with selfies and phones and social media? Will that change the way we think about images of the presidency in the future?

That’s a good question. President Obama happened to be president when social media exploded, and he utilized it in a way that no one had before. Trump’s done the same thing, but the imagery does not fit the tool; it’s all reality show pictures, and not really that revealing. Each administration going forward is going to have to wrestle with this.

My one concern — and if Joe Biden is elected, I will weigh on this — my one concern is that I don’t want the next official White House photographer to think that their number one goal is to make pictures for social media. That is not the primary purpose of that position. That position is to document the presidency for history, which was my primary mission as well.

That’s not to say that an administration cannot use the photographs that the White House photographer takes for social media, but there’s got to be a separation in the purpose of your position, and your position should be documenting the presidency for history. I will weigh on that, or I may go to some of the Biden people I know and say, “Do not lose sight of this fact: You need to have a visual record of your presidency for history.”

The Way I See It premieres in limited theaters on September 18 and on MSNBC on October 9.