Why North Carolina has giant lagoons of pig poop 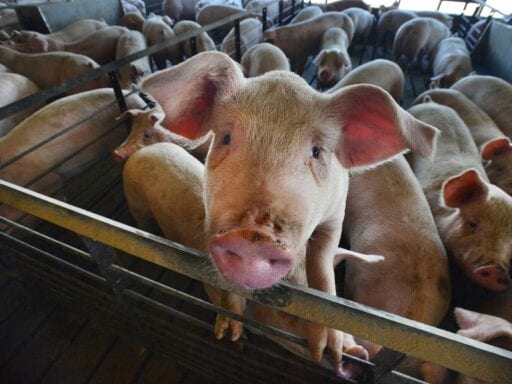 Share
Loading...
Neighbors in Duplin County, North Carolina, have to smell the waste of pigs like this one at Silky Pork farms, photographed in 2014. (This specific pig is long dead.) | Chuck Liddy/Raleigh News & Observer/Tribune News Service via Getty Images

Introducing Future Perfect season 3, all about the human cost of factory farming.

Some 80 million pigs live on farms in the United States at any given time in 2020. The total number slaughtered in a year is even higher, as pigs are typically killed at 6 to 8 months of age. In 2019, nearly 130 million pigs were slaughtered.

To slaughter that many pigs in a year, we need a highly industrialized system. And indeed, that’s the food system we’ve created: 98.3 percent of those pigs live on CAFOs, or concentrated animal feeding operations. When you hear the phrase “factory farming” and imagine large industrial operations where a whole lot of animals are killed and processed, CAFOs are what you’re thinking of.

Large CAFOs as a model have major, negative ramifications for the welfare of animals that these facilities house. They rely on intensive confinement practices like, for instance, gestation crating, which involves confining mother pigs to fenced-in areas barely larger than their bodies, where they also lack the room to turn around. Ian Duncan, an eminent scholar of animal welfare at the University of Guelph, has described it as “one of the cruelest forms of confinement devised by humankind.”

But they have major negative ramifications for residents of towns where these CAFOs are located, too. That’s because pigs produce 8 to 10 times as much fecal matter on a daily basis as humans. When you look at a hog-farming state with lots of CAFOs like North Carolina, that adds up. A 2008 Government Accountability Office study looking at just five counties in North Carolina estimated that their CAFOs produced 15.5 million tons of pig manure every year.

Where does this manure — not to mention pig urine, as well — go? Into the air, largely. North Carolina farms typically use what’s called a “lagoon and sprayfield” system in which animal waste is stored in massive, open vats. It’s then sprayed back into the air to fertilize crops. That’s a way to save money for farmers.

In the third season of the Vox Media Podcast Network series Future Perfect, we — me, my cohost Sigal Samuel, and our reporter/producer Byrd Pinkerton — are delving into the way the meat we eat affects all of us. And we’re starting in episode one by explaining North Carolina’s giant lagoons of pig poop, and the incredible environmental and human toll they’ve taken:

You can subscribe to Future Perfect on Spotify, Apple Podcasts, Google Podcasts, Stitcher, or wherever you get your podcasts.

The TikTok-Microsoft-Trump drama, explained
Federal budget cuts are a blow to evidence-based medical training
Meet the women suing America’s biggest companies over equal pay
Why the no-tipping movement failed (and why it still has a chance)
The tech sector is finally delivering on its promise
The debate over whether to ban “virginity testing,” explained