The Senate has agreed to an FBI investigation of Kavanaugh. Here’s what that means. 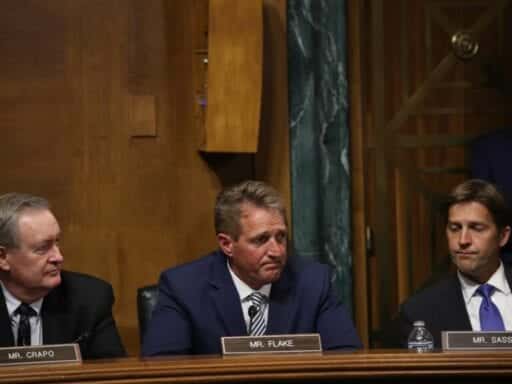 Without the votes to confirm Brett Kavanaugh, the Senate and the White House agreed to open an FBI investigation.

Without the votes to confirm Supreme Court nominee Brett Kavanaugh, Senate Republicans have agreed to allow for a one-week federal investigation into the current claims of sexual assault that have been raised against Kavanaugh.

Here’s what Republican leaders have agreed to, according to a statement released from the Senate Judiciary Committee Friday afternoon:

The Senate Judiciary Committee will request that the administration instruct the FBI to conduct a supplemental FBI background investigation with respect to the nomination of Judge Brett Kavanaugh to be an Associate Justice on the Supreme Court.

The supplemental FBI background investigation would be limited to current credible allegations against the nominee and must be completed no later than one week from today.

The Senate voted on a motion to proceed on Kavanaugh’s nomination on Friday evening, which brought his nomination to the floor and opened up debate. Senate Majority Leader Mitch McConnell has agreed to delay a cloture vote on the nomination up to a week, until the FBI has completed an investigation, according to Sen. Jeff Flake. A cloture vote is a procedural step that the Senate needs to take to limit debate, before a vote on his confirmation can occur.

Trump on Friday ordered the FBI to open a probe into sexual misconduct allegations that have been brought against Kavanaugh.

The FBI’s investigation will be limited to the “credible” allegations against Kavanaugh, including Christine Blasey Ford’s allegation that Kavanaugh sexually assaulted her in high school — which she testified to in the Senate Thursday. A second woman, Deborah Ramirez has also claimed that he drunkenly exposed himself to her at Yale College and thrust his genitals in her face without consent. This allegation could also be part of the review — though lawmakers weren’t sure exactly what the scope of the full FBI probe would be.

This arrangement was the result of Sen. Jeff Flake’s (R-AZ) stand Friday at the Senate Judiciary Committee hearing, calling for the FBI to reopen its background investigation into Kavanaugh to vet the sexual assault allegations made by Ford. Flake heavily implied, but did not say outright, that he would vote against Kavanaugh’s confirmation on the Senate floor unless his wishes were met. Friday morning, Flake said that he would vote to confirm Kavanaugh, only to have second thoughts.

There are also two other undecided Republican votes — from Sens. Susan Collins (R-ME) and Lisa Murkowski (R-AK) — who are in favor of an investigation. With the vote uncertain, it’s clear Republican leaders have been forced to heed to Flake’s demands, and accept the federal investigation Democrats and the accusers have been calling for from the beginning.

Republicans want to move this process along

Before Flake’s stand, Democrats’ call for an FBI investigation seemed to be going nowhere.

Republicans, adamant about pushing Kavanaugh through the process as quickly as possible said there was no need to call for any additional witnesses to testify or call on the president to reopen the background check into Kavanaugh. While Kavanaugh’s accusers all joined in requesting an FBI investigation, Kavanaugh seemed more reluctant, arguing that it wouldn’t provide any additional insight. He said, however, he would cooperate if the committee leadership requested it.

There are also three key Senate procedural steps Kavanaugh has to go through to get confirmed by the Senate:

The last step of this process will have to wait until the FBI investigation is complete — which can last no more than one week.

This background check will be a major wild card in the coming days. How the senators react to the information provided by the background check could change the course of Kavanaugh’s nomination.

This will all likely come down to these senators

The day after emotional testimony from Ford, a Palo Alto University professor who has accused Kavanaugh of pinning her down and groping her at a high school party, and an angry denial from Kavanaugh, Republicans appeared to be closing ranks behind Kavanaugh.

The Senate Judiciary Committee voted to recommend Kavanaugh to the Senate floor for a full vote Friday afternoon. But the votes of several key senators remain unknown:

Then there is Flake, who earlier Friday said he would support Kavanaugh but has now changed his mind, adding that the Senate must undergo “due diligence” and call for a federal investigation. Whether the results of the investigation will change his vote remains to be seen.

Bill Barr tried to fire the US Attorney for Manhattan. He refused to step down.
The political map ahead is bad for Bernie Sanders
The first aviation disaster caught on film
It is absolutely fine to rip your books in half
The coronavirus pandemic hasn’t stopped the war in Afghanistan
Trump is the “wrong president for our country”: Read Michelle Obama’s full speech