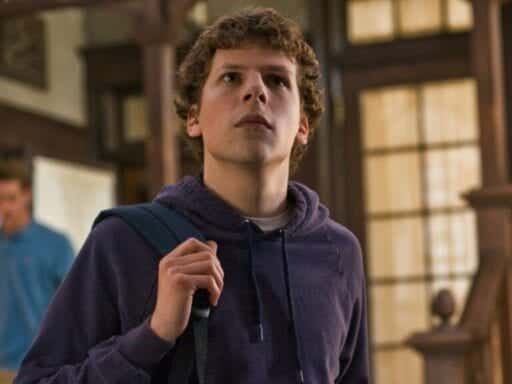 Back in 2010, a website became a white-knuckle thriller and predicted a dismal online future.

As I recall, I greeted the news of The Social Network’s imminent release with skepticism. A Facebook movie? Really?

It was 2010, long before Facebook was the exemplar for everything that’s wrong with the Internet and possibly democracy. A “Facebook movie,” whatever that would be, seemed likely to be some gimmicky forerunner of the painful branded-property movies we’d suffer through in the latter half of the decade, like the Playmobil movie and the Trolls movies and, infamously (in my case anyhow), The Emoji Movie. What would it even be? Lots of LOLs and pokes and quips about unfriending?

Nope. Turns out The Social Network was a prescient and smart white-knuckler, maybe the best Aaron Sorkin has ever written. With David Fincher at the helm, it took on the dark, glossy eeriness of a thriller, and kind of a sexy one, which isn’t something you would probably expect from a movie about a social networking site.

Jesse Eisenberg was a known entity prior to playing Facebook founder Mark Zuckerberg, having broken through in Zombieland a year earlier. But being Zuckerberg made him a star (and an Oscar nominee). It seemed like a perfect melding of the actor and his real-life character: Twitchy, vulnerability masked by an antisocial streak, and obviously smart as hell, the Eisenberg-Zuckerberg hybrid became, in many of our minds, just plain old Zuckerberg (a fact the pair appeared on Saturday Night Live to joke about a few months later). Seeing real Zuckerberg in the news, nearly a decade later, still requires me to make a mental readjustment. Oh, yeah. That’s what he looks like.

It didn’t really matter that the central notion of the film — that Zuckerberg’s odyssey as the ruthless college-age coder and founder of a website empire had been driven by romantic disappointment — had factual inaccuracies. Zuckerberg seemed more or less genial about the whole thing when questioned (“Every single fleece and shirt I had in that movie is actually a shirt or fleece that I own,” he told an interviewer), but he was also very clear that in contrast to the film’s impression of him as a lovelorn, socially awkward bachelor, he’d been dating the same woman since he started Facebook during his undergrad years at Harvard. (That woman is Priscilla Chan, and the two married in 2012.)

None of that mattered, because The Social Network was not actually a movie about Mark Zuckerberg. It was a grand epic painted on top of the story of a guy moving code around. A metanarrative emerged, one that not only worked for Facebook but would also be repeated, a theme with variations, over a decade of Silicon Valley innovators who would “break things.” Zuckerberg didn’t just make a website; he made a platform, a place where he could, in the words of the screenplay, “[take] the entire social experience of college and [put] it online.” Making friends. Dating and hooking up. Selling and buying things, following brands, looking up your childhood friends, and inviting people to parties. Following political campaigns and sharing stories that may or may not be accurate but sure do look official. Clicking on ads. Crafting your persona. Eventually, getting sick of it and moving on to a different forum. Facebook encompassed them all.

The Social Network is a movie about a generation (mine and Eisenberg’s and Zuckerberg’s, the so-called “elder millennials”) who would learn to port our offline lives online. Within a decade, looking for a date and buying a mattress and getting dinner and doing your job and tracking your emotional health would all be matters conducted in the cloud, rather than in stores, bars, supermarkets, and paper notebooks.

As Zadie Smith wrote in the essay titled “Generation Why?,” published a few weeks after the film’s release, the world Zuckerberg created reduced us to data points. “Everything shrinks. Individual character. Friendships. Language. Sensibility,” Smith wrote. “In a way it’s a transcendent experience: we lose our bodies, our messy feelings, our desires, our fears. … With Facebook, Zuckerberg seems to be trying to create … an Internet with one mind, a uniform environment in which it genuinely doesn’t matter who you are, as long as you make ‘choices’ (which means, finally, purchases).”

Or, as Zuckerberg tells his buddy Eduardo Saverin (played by Andrew Garfield) as he’s coming up with the idea:

People want to go online and check out their friends, so why not build a website that offers that? Friends, pictures, profiles, whatever you can visit, browse around, maybe it’s someone you just met at a party. Eduardo, I’m not talking about a dating site, I’m talking about taking the entire social experience of college and putting it online.

In the intervening decade, as Facebook spread beyond college campuses and throughout the rest of the world, society became one big college social experience. Not everything takes place on Facebook, though you still need Facebook to log in to anything. But that feeling of something more exciting happening somewhere else, of being defined by grades (or likes), of experimenting with nutty ideas you’ve just encountered, of sniping at people from jealousy and watching people of whom you’re envious out of the corner of your eye — all of that, once it migrated online, started shaping our offline lives and being weaponized, too.

And it’s not just foreign governments who have weaponized that platform, where reality and fantasy blur, where saying something is true means that at least some people will just believe it and act on it. In the movie, the fictional girl Erica Albright (played by Rooney Mara), whose rejection of (Eisenberg’s take on) Zuckerberg was the impetus for the whole thing, confronts him angrily after he got a little drunk and wrote a blog post in which he calls her a bitch. She calls him out for acting “as if every thought that tumbles through your head was so clever it would be a crime for it not to be shared. The Internet’s not written in pencil, Mark, it’s written in ink. And you published that ‘Erica Albright was a bitch,’ right before you made some ignorant crack about my family’s name, my bra size, and then rated women based on their hotness.”

“You write your snide bullshit from a dark room because that’s what the angry do nowadays,” she says. “I was nice to you. Don’t torture me for it.”

Erica’s nowadays, it turns out, was a prophecy about the future. The Social Network got where the Internet was heading, even if it didn’t get Zuckerberg himself quite right. Facebook may go away, but it seems likely that the world it created is here to stay.

The Social Network is available to digitally rent or purchase on Google Play, iTunes, YouTube, Vudu, and Amazon.

Artisanal brooms exist, and they cost up to $350
Early polls show voter support for impeachment is growing
How Biden has — and hasn’t — harnessed the national reckoning on race
Members of Congress want to know more about law enforcement’s surveillance of protesters
The controversy over 2 Trump allies getting tested for coronavirus, explained
The debate over a post office bailout, explained