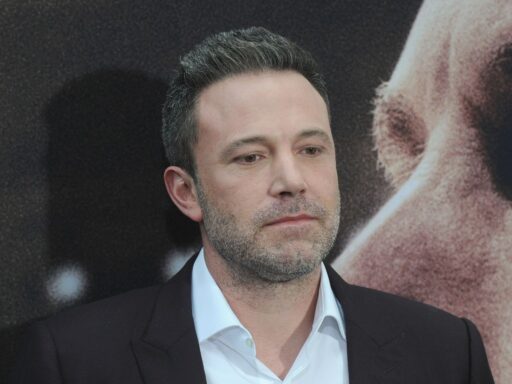 There is a certain poetry to the image: a life-sized cardboard cutout of the actress Ana de Armas, carried by a masked man to a trash can outside of Ben Affleck’s house. The picture hit the internet just hours after People magazine reported that the erstwhile BenAna had split, and in its tragicomic pathos, it seemed to somehow encapsulate the way a lot of people on the internet feel about Ben Affleck’s pain.

It’s sad when small-scale petty miseries happen to Ben Affleck, sure. But for some reason, it’s also incredibly funny.

A life-sized cardboard cutout of Ana de Armas from inside Ben Affleck’s residence was seen being thrown out into a trash can. (January 18, 2021) pic.twitter.com/4bxxDC97WZ

There is an actual explanation for the cardboard cutout of Ana de Armas. Armas put it out on the front lawn herself back in June, in an apparent attempt to troll the paparazzi. And now, post-breakup, Affleck seems to no longer want a giant cardboard picture of his glamorous ex-girlfriend, which is an understandable impulse. Some internet sleuths have even theorized that the masked man disposing of Cardboard de Armas is Affleck’s brother Casey (there is a startling resemblance around the eyes), which surely most of us can agree would be no more than brotherly duty.

But the image of the cardboard cutout going into the garbage is so over-the-top absurd, feels so designed to become a meme, that it fits in instantly with a whole catalog of moments of Ben Affleck’s sadness. These moments arrive into popular consciousness ready to be screencapped and GIF-ed and captioned “same” and dropped into a comment thread every time you need to express your sorrow over something that suits the moment’s sense of scale, such as learning that your favorite brand of peanut butter has been discontinued.

There was the time Affleck dropped his Dunkin Donuts, gazing down at his tray of iced coffees and box of munchkins with palpable despair. There have been so, so many instances of Affleck smoking in various states of resentment and misery. And remember when Affleck was photographed at the beach with an enormous back tattoo so embarrassing he denied for two years that it was real?

Of course, we mustn’t forget the most immortal Sad Ben Affleck meme of all: the time he was promoting the much-panned Batman v. Superman in 2016 and appeared to enter into a fugue state of silent anguish, sitting dead-eyed and unspeaking next to his co-star Henry Cavill as Cavill merrily talked his way through the interview. An enterprising YouTuber edited the video to push in on Affleck’s internal torment as Simon & Garfunkel’s “Sounds of Silence” swelled in the background, and the moment became iconic.

Asked in 2017 whether he’d learned anything from the experience of shooting Batman V. Superman, Affleck replied, “It taught me not to do interviews with Henry Cavill where I don’t say anything and they can lay Simon and Garfunkel tracks over it. That’s one thing I learned.”

Ben Affleck is a real person who has experienced real and genuine pain in his life. He has struggled with alcoholism and an apparently difficult divorce, and he’s gone in and out of rehab. He’s talked openly about feeling trapped in a cycle of pain.

“People with compulsive behavior, and I am one, have this kind of basic discomfort all the time that they’re trying to make go away,” Affleck told the New York Times in 2020. “You’re trying to make yourself feel better with eating or drinking or sex or gambling or shopping or whatever. But that ends up making your life worse. Then you do more of it to make that discomfort go away. Then the real pain starts. It becomes a vicious cycle you can’t break. That’s at least what happened to me.” Those feelings are real and sad, and they should not be mocked.

Nonetheless, the small and petty miseries happening to Ben Affleck somehow seem to carry their own iconography. Divorced from context and memed across the internet, they stop being about the sorrow of a real person who is going through it, and they start to be about something funny happening to a rich and famous Oscar-winning movie star, who you don’t have to feel bad for because why would you? Sad Ben Affleck is like a sitcom character known for doing pratfalls: Oh, that Ben. Can’t he do anything right?

“The image suggests not just the fall of Affleck but the coming fall of man,” wrote Naomi Fry in the New Yorker of Affleck and his back tattoo in 2018. “There is something about this exhausted father that reflexively induces panic. We’ve been living in a world run by Afflecks for so long, will we even know ourselves when they’re gone?”

As Fry suggests, it is in part Affleck’s social status as a middle-aged rich white dude who has been famous for decades that lends the spectacle of his sadness its iconic force. We’re used to seeing men like Affleck in charge, and we are now, perhaps, in the process of seeing the group he represents begin to lose their stranglehold on cultural and political power. Represented by Sad Affleck, that group seems to become small and bumbling: pitiable because they just can’t quite seem to get it right, but still funny because, after all, they’ve all had so much power for so long that it can’t hurt them to lose a little of it.

The images also acquire some of their humor through the oily slick of smugness that always seems to accompany Ben Affleck, no matter how sincerely he tries to wipe it away. His finest work as an actor tends to come when he leans into that smugness: In 2014’s Gone Girl, where he plays a wrongly accused man cursed with a “punchable face;” in 2020’s The Way Back, where he plays a former golden boy turned has-been, desperate to make good.

And in public life, small miseries work to puncture it, rendering Affleck sweetly, haplessly sympathetic. How can he be so smug when he is so pitiable? You can identify with the despair — but you can also mock it. And our collective understanding of Affleck as someone smug, however fictional that persona might be, renders that mockery all the more satisfying: Now he’s been brought down a peg. You like him more because of it, and maybe you feel for the guy, but you also feel driven to rub it in a little.

Oh, there he goes, that Ben, dropping his Dunkin again. Experiencing an existential crisis on camera while promoting a bad movie again. Throwing out a life-size cardboard cutout of his ex-girlfriend again. Couldn’t happen to anyone else. Womp womp.

Pete Buttigieg is raising money from Silicon Valley’s billionaires — even as Elizabeth Warren attack...
Why Incredibles director Brad Bird gets compared to Ayn Rand — and why he shouldn’t be
How San Francisco billionaire Tom Steyer, the richest Democratic candidate, spends his money
UK Parliament fails to agree on a new Brexit plan — again
In Netflix’s Dick Johnson Is Dead, a father and daughter imagine his death with humor and love
The world’s scariest facial recognition company, explained