The Trump-Ukraine scandal, explained in one minute 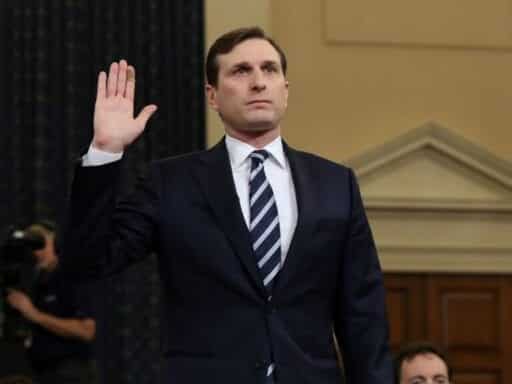 The opening of the House Judiciary Committee’s second impeachment hearing took up the better part of the morning, and was often disrupted by procedural gambits from Republican committee members aiming to slow down the proceedings. You can be forgiven if you didn’t see every minute of it.

But if you want to understand the big picture takeaways from the morning’s proceedings quickly, the best thing to do is look over the one-minute long closing comment from Democratic witness Daniel Goldman.

Goldman, an attorney who questioned witnesses for Democrats during the House Intelligence Committee hearings, ended his testimony by concisely summarized the key findings of that committee’s 300-page majority report on the Ukraine scandal. It’s about as clear a guide to what happened and why it’s impeachable as you can hope for.

“The president’s scheme is actually quite simple. And the facts are not seriously in dispute,” Goldman said. He summarized it in the form of “four key takeaways”:

First, that President Trump directed a scheme to pressure Ukraine into opening two investigations that would benefit his 2020 reelection campaign, and not US national interests.

Second, President Trump used his official office and the official tools of US foreign policy, the withholding of an Oval Office meeting, and $391 million in security assistance, to pressure Ukraine into meeting his demands.

Third, everyone was in the loop. His chief of staff, the secretary of state, and vice president.

And fourth, despite the public discovery of this scheme which prompted the president to release the aid, he has not given up. He and his agents continue to solicit Ukrainian interference in our election, causing an imminent threat to our elections and our national security.

DANIEL GOLDMAN: “The president’s scheme is quite simple and the facts are not seriously in dispute. It can be boiled down to four key takeaways.” pic.twitter.com/iohClV27Mr

The rest of Goldman’s testimony amounted to an elaboration on these conclusions. He explained the evidence for each of them in painstaking detail, frequently referencing sworn testimony from top administration officials. He also delivered a detailed analysis of the summary of Trump’s July 25 call with Ukrainian President Volodymyr Zelensky. His Republican counterpart, Steve Castor, also testified on Monday morning — but did little to to dent the fact pattern established by Goldman.

It’s really worth pondering Goldman’s fourth point: That Trump “has not given up.”

Indeed, Rudy Giuliani — Trump’s lawyer and his point man on this effort to enlist Ukrainian assistance — was in that country just last week, allegedly working on a “documentary” with a far-right news organization.

This sort of behavior is what Goldman means when he says there’s “an imminent threat to our elections and our national security”: That so long as Trump believes he can get away with trying to get the Ukrainian government to tar Joe Biden’s reputation, he’ll keep trying to get them to do that. And this is why impeachment seems so urgent to Democrats. Trump does not see inviting a foreign power to influence a US election as wrong and will not — unless there’s sufficient pressure put on him to stop it.

Bloomberg’s Instagram meme ad campaign is backfiring
Netflix’s The Laundromat is certainly the most entertaining way to learn about the Panama Papers
Aircraft fuel is notoriously dirty. This airline is betting on clean electricity.
How the coronavirus got Joe Biden to think much bigger
Oh great, now we’re running out of bikes
Poll: Pete Buttigieg becomes the presidential frontrunner in Iowa