The US and the Taliban are inching closer to a peace deal. It could all still fall apart. 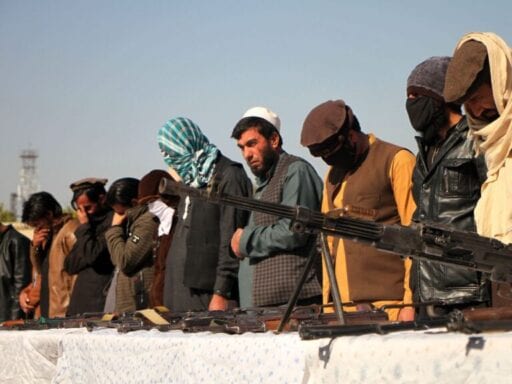 “We are giving it a sincere chance,” a senior Afghanistan official told Vox, noting “it’s hard to trust the Taliban.”

The United States and the Taliban are about to take their biggest step yet toward reaching a peace deal in Afghanistan, perhaps starting the process of bringing thousands of American troops home from the nation’s longest-ever war.

On Friday morning, Secretary of State Mike Pompeo announced that the Trump administration and the hardline Islamist group had agreed to a “nationwide reduction in violence across Afghanistan,” to begin tonight in the country. In other words, something just short of a complete ceasefire. If it holds, both sides would sign a peace deal on February 29.

At that point, negotiations would begin on March 10 between the Taliban and the Afghan government, a senior Afghan official told me. That’s going to be very tricky, because the insurgents reject Ashraf Ghani’s administration as an American puppet with little control outside the capital.

After decades of conflict, we have come to an understanding with the Taliban on a significant reduction in violence across #Afghanistan. This is an important step on a long road to peace, and I call on all Afghans to seize this opportunity.

Still, many hope for the best. “We are giving it a sincere chance,” the senior Afghan official said on the condition of anonymity, adding, “It’s hard to trust the Taliban.” The official said the exact location for the Taliban-Afghan government talks are “details to be worked on.”

The Taliban, for now, seems willing to move forward. “Both parties will now create a suitable security situation in advance of agreement signing date, extend invitations to senior representatives of numerous countries and organizations to participate in the signing ceremony, make arrangements for the release of prisoners,” and prepare for talks with Kabul, the group said in a Friday statement.

A lot can go wrong between now and the intra-Afghan negotiations, though. The ceasefire could break, as the Taliban’s ranks are notoriously fractious. “It is precisely this inconsistency that could undermine the future of this agreement and, if not more important, that of a peace agreement amongst Afghans themselves,” Tanisha Fazal, an expert on armed conflict at the University of Minnesota, told me.

What’s more, talks between Kabul and the Taliban could easily falter, and would likely take months or years to complete even if they’re fruitful.

Few question the Trump administration’s desire to withdraw nearly all of the 12,000 US troops from Afghanistan, preferably before the president’s reelection bid in November. Even fewer question the Afghan government’s hope for peace in the country.

The biggest question mark, then, is what the Taliban truly wants out of this process.

“In the end, it won’t matter,” Daniel Bolger, a retired Army three-star general who served in Afghanistan, told me. “All that’s being negotiated is the rate of the American and NATO withdrawal. The Taliban is just waiting us out. They think they’ve won.”

To understand why US-Taliban talks aren’t easy — and what makes Pompeo’s announcement so historic — we need to understand the recent history.

The Taliban took control of Afghanistan in the early 1990s and by 1998 controlled around 90 percent of the country. The group imposed its strict interpretation of Islamic law on the country: Men had to grow long beards, women were forced to cover themselves completely, and people were prohibited from watching movies or listening to music. Punishments for various crimes sometimes included public executions or amputations.

After 9/11, the US started paying closer attention to the group. US officials suspected the Taliban of harboring Osama bin Laden, who orchestrated the 9/11 attack, and his terrorist group, al-Qaeda. Less than a month after the attacks on the World Trade Center and the Pentagon, the US invaded Afghanistan to defeat al-Qaeda and remove the Taliban from power.

The Taliban quickly lost control of Afghanistan and retreated into neighboring Pakistan, where it has since regrouped. Now, 18 years later, the Taliban is the most formidable insurgency fighting the United States and the Afghan government — and it doesn’t look like its more than 60,000 fighters are going anywhere anytime soon.

That’s because the Taliban is actually winning the war against the Afghan military, which is backed by roughly thousands of American troops in the country. Two charts from the Special Inspector General for Afghanistan Reconstruction, the US military’s Afghanistan war watchdog, make this clear.

This has made it hard for the US to reach some kind of peace deal with the Taliban despite a decade of effort. The Taliban likely doesn’t to make too many concessions because it currently has the upper hand in the war.

That’s made it hard for the US to compel the insurgents to speak with the Afghan government. But the Trump administration has long said the only way for the war truly to end requires the Taliban and the government in Kabul to negotiate a peace deal.

Afghan President Ashraf Ghani, for his part, has repeatedly expressed a desire for talks with the Taliban and has consistently reiterated that stance. But Ghani also said he doesn’t want to rush into discussions, noting that a bad deal could lead to bloodshed in the future and make life worse for the people of Afghanistan — particularly the women and minorities who suffered greatly under Taliban rule.

It would still be a major sign of progress if the Taliban ultimately agreed to meet with the Afghan government, though. The problem is that the most difficult part — ironing out the specifics of an Afghan government-Taliban deal — would come next.

Experts I’ve spoken to identify a variety of potential problems that could impede a deal, and all of them said it could take months or years to complete. The issues break down into roughly two categories: how much power the Taliban gets to have, and what America’s future role would be.

Let’s look at each one.

1) How much power does the Taliban get?

In the short term, this is likely the biggest sticking point.

The Taliban wants to govern the country again like it did prior to the US-led invasion in 2001. Therefore, it aims to obtain as much power as it possibly can in any potential deal.

Some ways it could do that might include taking control of certain government ministries, or even rewriting parts of the country’s constitution to align more favorably with its hardline Islamist ideology.

The Taliban may also push for a deal whereby the government controls the capital and other populous areas while the Taliban takes over parts of the country’s east and south — areas it controlled even at the height of the war.

Finally, and controversially, Taliban fighters could even integrate into the Afghan military. That’d be hard to swallow for many, as the group has killed thousands of Afghans and Americans. It’s unclear if the US would continue to fund or support Afghan forces if Taliban militants join their ranks.

Either of those possibilities would give the Taliban way more authority over the state than it has now.

One idea that both Ghani and the Taliban have long rejected is to form an interim government, where the insurgent group’s leaders would temporarily join the administration and allow talks to continue. The Trump administration and Ghani, though, say elections are the only way to have a democratic and representative government in Kabul.

But the talks assume one thing: that the security situation in the country will remain about where it is — and that depends heavily on US involvement.

2) What is America’s future role in Afghanistan?

Trump has made no secret of his desire to remove US troops from Afghanistan. After months of pushing back against his advisers, the president reluctantly sent 3,000 more service members into the country in September 2017, then upping the total to 14,000.

But the president has made no secret of his desire to end the war in Afghanistan, leading critics of the peace process to say the entire thing is a sham. “Kabuki theater is what this is,” Bill Roggio, an expert on Afghanistan at the Foundation for the Defense of Democracies think tank, told me last year.

The Taliban could also stall talks with the Afghan government and just wait for Trump or a future Democratic president to tire of diplomacy and bring US troops home before a final deal is signed.

What’s more, it’s highly likely the Taliban will renege on any commitment it makes to the Afghan government if US forces aren’t around to back Kabul. Put together, Roggio told me, “the US is debasing itself to the Taliban to get a peace deal that won’t result in peace.”

He’s not alone in that thinking. Vanda Felbab-Brown, an insurgency expert at the Brookings Institution think tank, told me last year there’s a “high likelihood we’re seeing a repeat of the Vietnam War negotiations.”

In that instance, the US left the fight in 1973 after striking a deal with the North Vietnamese in hopes they would negotiate with their enemy, the South Vietnamese, and end the war. That didn’t happen. Instead, the North took over most of the nation, in violation of the US-brokered peace agreement.

Felbab-Brown noted a big difference between that moment and this one, though: The Taliban doesn’t have enough military might and power to control the entire country. But it can definitely control parts of Afghanistan’s more rural communities and engage in fighting multiple areas.

Surely the Taliban would try to take control of Kabul, at some point, and that battle “would be a bloodbath,” she said.

It’s a major accomplishment that the Trump administration made it this far, and may have finally put America on the path to ending the war. But doing it responsibly, ensuring the US-allied Afghan government and minorities in the nation aren’t left to greatly suffer in the end, is no easy task.