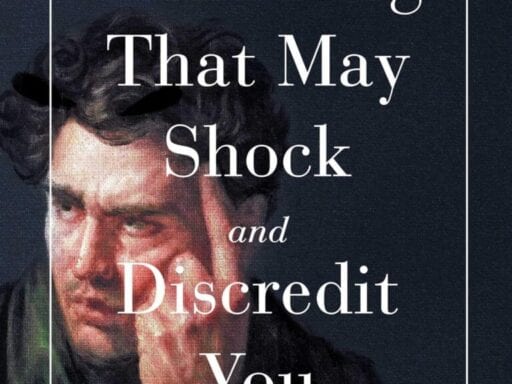 In Something That May Shock and Discredit You, the author (who recently changed his name to Daniel M. Lavery) riffs elegantly on gender, theology, and pop culture.

If there’s a moment that best sums up Daniel Mallory Ortberg’s new memoir in essays Something That May Shock and Discredit You, it’s when Ortberg declares Gomez Addams of Addams Family fame to be an icon of transmasculinity.

Gomez, Ortberg writes, takes a “vocational glee” in his masculinity that is distinctively transmasculine. “One gets the idea, watching Gomez, that he delights in getting to be a man, short and boisterous and nurturing and bursting with hope and pocket watches,” Ortberg muses. As such, “it’s very easy to imagine Gomez’s inner euphoria-driven monologue when he wakes up every morning: Ah, how wonderful! Another stormy day! Ahahaha! Once again, I’m a short and stocky husband and father, with a wife as tall as God! What luck!”

A similar kind of glee animates Ortberg’s writing, and it rushes all the way through this thoughtful, joyous book. Even when Something That May Shock and Discredit You delves into difficult material — Ortberg’s relationship with his mother in the wake of his transition; the way certain friends and loved ones repeatedly talk about him as though he has died — Ortberg always writes with a sense of profound and honest delight: What luck, it’s another day where he gets to be a man. And reading, you can’t help but be delighted with him.

Ortberg, who since his marriage has changed his name to Daniel M. Lavery but published this book under the name Daniel Mallory Ortberg, first became famous for co-founding the beloved cult website the Toast. (I’m referring to him as Ortberg rather than Lavery throughout this review at the request of his publisher.) At the Toast, he wrote weird, specific, and incredibly compelling essays like “This Guy on an Old Harry Potter Forum Says Dumbledore Is a Time-Traveling Ron Weasley and I Want to Hear Him Out,” or a version of the fairy tale The Six Swans made profoundly horrific — plus the series that eventually became his first book, Texts From Jane Eyre.

Since the Toast shuttered in 2016, Ortberg has mostly been keeping busy helming Slate’s Dear Prudence advice column, which compared to the Toast is fairly, for lack of a better word, normie. He reserves much of his weirdest writing for his newsletter and put some of it in his second book, the Lovecraftian Merry Spinster: Tales of Everyday Horror. But in his post-Toast career, Ortberg has rarely written with quite the combination of devastating precision and thoughtfulness and shameless joy that made the Toast so compelling — at least until Something That May Shock and Discredit You.

This book is odd and self-satisfied and bizarrely specific, in all the best possible ways. Consistently, it’s funny: There are essays on such topics as why Ortberg was compelled to transition after a man watched him fail to parallel park; why both Captain Kirk and Duckie from Pretty in Pink are lesbians (“just because I think Duckie is a lesbian doesn’t mean that she is making excellent and healthy choices”); and how Ortberg intends to comport himself when he has abs someday (“basically I just manage to fall into this sweet spot, sartorially speaking, where I’m neither trying too hard nor trying too hard to look like I’m not trying too hard”). He also writes about how Lord Byron isn’t really mad or offended at his ex-wife. Byron really just thinks it’s funny that she’s such a heartless bitch.

But Something That May Shock and Discredit You is also tenderly, gently thoughtful about gender and about what it means to transition, especially for someone like Ortberg, who built a public reputation as a feminist running a women’s website before coming out. “I disliked sexism, admired and liked women, had been given a girl’s name, and found it very easy not to think about my body,” he writes of his life before transition; “surely this made me a girl, and certainly no one had ever suggested that this was anything less than sufficient.”

Ortberg writes about wanting to apologize to his mother for no longer being her daughter, “because it was the only way I knew to acknowledge that my body was a gift her body made me.” (Since writing that passage, Ortberg has become estranged from his family and changed his name.) He thinks about the popular paranoia that children are being forced to transition even when they are actually cis, about whether his childhood experience of his gender is useful to him for understanding his gender as an adult, and about why he ended up transitioning in the first place. “The best reason for transition, as I understand it,” he concludes with deceptive mildness, “is ‘because I particularly wish it.’”

Traditionally, the verb of choice to describe the process of thinking very hard about something is wrestling. Ortberg, whose father is an evangelical pastor, takes the metaphor one step further, returning over and over again to the Bible story of Jacob wrestling with the angel in exchange for a blessing and being renamed Israel. “Jacob is given a blessing and a new name but never an explanation; the angel is gone as abruptly as it came; Jacob never walks the same,” Ortberg writes in one essay.

“You, you show up, and you fight me, and then you touch me,” Jacob yells to the angel in another essay 70 pages later, “and now I have a different name I’m going to have to explain to everyone.”

“All of those are excellent points,” is all the angel says in response, and the essay ends with the former Jacob, now Israel, “trying to think of an explanation for everyone.”

Something That May Shock and Discredit You is not precisely an explanation for everyone who was wondering why the person they first knew as Mallory Ortberg is now Daniel M. Lavery. It is neither apologetic nor self-justifying, and Ortberg remains very clear on the fact that he does not owe an explanation about himself or his gender to anyone.

Instead, this book reads like an exploration — a funny, gentle, thoughtful exploration — of how Ortberg sees the world, and how transitioning affected the lens through which he sees it. Reading it feels like reading the Toast felt in 2013, which is to say it feels like coming into contact with a restless and smart mind of profound and specific hyperfixations. It’s a joy.