The US is sending 5,000 troops to the border. Here’s what they can and can’t do. 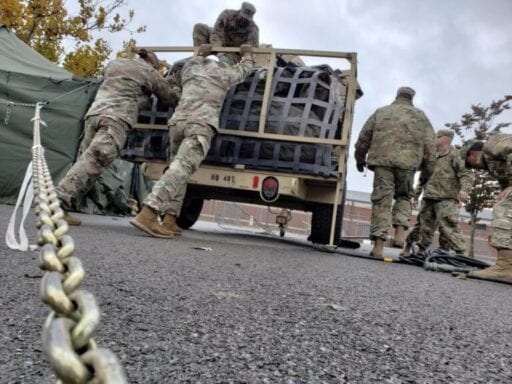 They can fly aircraft and lend support, but they can’t detain anybody.

President Donald Trump has ordered an additional 5,200 troops to “harden” the US-Mexico border before the so-called caravan of migrants from Central America seeking asylum and a new life in the US arrives. The group of about 4,000 migrants from mostly Honduras and Guatemala is currently 1,000 miles and weeks away from the US border.

Senior officials from the Pentagon and the Customs and Border Protection told reporters on Monday that 800 service members are already headed to Texas, with the remaining 4,400 arriving over the coming days.

The forces, deployed as part of “Operation Faithful Patriot,” will include military police, pilots, and engineers and will be in the area from November 5 to December 15. The goal is to “harden our ports of entry,” in California, Arizona, and Texas, Customs and Border Protection chief Kevin McAleenan said.

That would increase the number of US military personnel at the Southern frontier to roughly 7,000 — about 5,000 more than America has in Syria to fight ISIS and approximately one-third the size of the entire Border Patrol force at the US-Mexico line.

The problem for Trump, though, is that the military won’t actually be able to participate in detaining or deporting any of the migrants the way the president likely wants. That’s because US law forbids them from physically detaining individuals at the border.

So while the troops at the border will be armed, they will only legally be able to assist US border officials by doing things like helping transport border agents and providing emergency medical care to those who need it. The armed forces can also work to reinforce infrastructure around the border, like putting additional razor wire on border fences.

In other words, while it may be intended to look as if the US is preparing for a massive invasion of immigrants at the Southern border, the reality is that it’s mostly just sending backup logistical support to help border agents address the arrival of a few thousand migrants — around half of whom are girls and women — who have been traveling by foot for weeks over.

Still, Trump is clearly hoping that the military deployment will prove a deterrent to the caravan headed northward. “This is an invasion of our Country and our Military is waiting for you!” he tweeted on Monday morning.

Here’s a short guide on what the military can — and can’t — do at the border.

What the military can do

Homeland Security Secretary Kirstjen Nielsen gave a good summary of what US troops are authorized to do.

“What we’ve asked them to do is help to bolster our capabilities,” she told Fox News last Thursday. “We’ve asked for some air support, for some logistics, some planning, vehicle barriers, engineering; ways in which we can make sure that I can protect my officers and agents, as well as the ports of entry themselves.”

Gen. Terrence J. O’Shaughnessy, the head of US Northern Command, told reporters on Monday what that assistance might look like. The military will send:

While troops will be armed, they can only support Border Patrol agents, not detain anyone (more on that below).

Michael Fisher, the US Border Patrol chief from 2005 to 2010, gave me one example of how the partnership will work.

Some troops will join Entry Identification Teams, which help to spot immigrants as they cross the border. “The military would be somewhere along the border, typically in an elevated location, providing eyes and ears for Border Patrol agents,” Fisher said.

As Vox’s Dara Lind explains, “It is completely legal for anyone on US soil to seek asylum, regardless of whether or not they have papers. People who present themselves for asylum at a port of entry — an official border crossing — break no US law.”

“People who cross between ports of entry are committing a federal misdemeanor,” however, though Lind writes that in even in those cases, “the US government is still required to allow them to pursue an asylum claim.”

It’s the people who may be crossing at an unofficial port of entry that the US border agents — and their US military partners — will likely be on the lookout for.

Border agents will be “in close proximity” to the US troops, but will leave on their own to arrest the spotted migrants. The military won’t be involved in actually detaining any individuals.

The military’s main impact, though, may actually be in their logistical assistance. The National Guard has operated in the US-Mexico border area since the 1990s, and much of what it does is build and repair infrastructure, like roads and the border fence.

The military’s ability to help transport Border Patrol officials around the area in planes and helicopters is also highly valuable, as border enforcement officials don’t have all the necessary equipment. The military can also provide temporary housing and protective gear for agents.

Fisher told me that, in his years of experience, he found the military’s help manning the border to be quite useful, but he added that, if needed, the law enforcement could do the majority of its work without the backup.

What the military can’t do

So why can’t US troops do what Trump wants and arrest immigrants who may be coming across the border illegally? Well, it’s against the law.

The US military is barred from using its capabilities directly to enforce US domestic laws — including immigration laws — unless Congress specifically authorizes it to do so. This measure, known as “posse comitatus,” is why US troops can only support US border agents, but not take direct action themselves.

O’Shaughnessy on Monday said the military will conduct all of its operations at the border “in adherence to posse comitatus.”

The Pentagon will foot the bill for the deployment. It’s unclear how much it will cost, but so far the military paid $185 million to send 2,000 National Guard troops to the border earlier this year.

It’s possible that all of these details will be resolved after all the troops have arrived. But some say the move is simply political.

Trump’s decision is “a misuse of active duty military,” Gil Kerlikowske, a former Customs and Border Protection chief, told the Washington Post on Monday. “To say this isn’t a political stunt is misleading the public.”

Can US companies solve the Trump tariff problem by manufacturing in the US? It’s complicated.
The Boston Marathon bomber’s death sentence has been overturned
The tyranny of the majority isn’t a problem in America today. Tyranny of the minority is.
Letterkenny, streaming on Hulu, is a love letter to small-town life and weird, wonderful slang
A conservative critic attacked Alexandria Ocasio-Cortez’s credentials — and got a major fact wrong
SNL’s Pete Davidson responds to Kanye West’s pro-Trump rant: “make Kanye 2006 again”