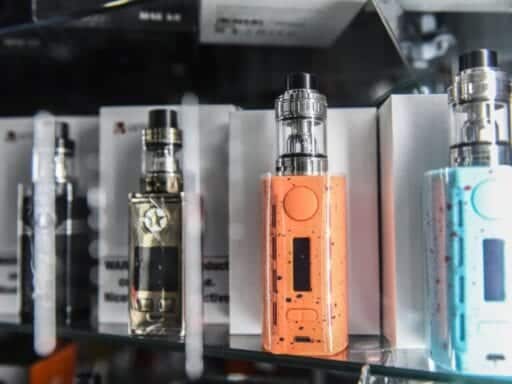 Share
Loading...
Vaping and e-cigarette products are displayed in a store on December 19, 2019 in New York City. | Stephanie Keith/Getty Images

A new study finds cases may have been surfacing as early as January 2017.

As the year draws to a close, the precise cause of the mysterious outbreak of vaping-related illness, or EVALI, that has swept through the United States, isn’t yet fully settled. And the numbers are bleak: As of December 17, more than 2,500 people have been hospitalized for EVALI in all 50 states, the District of Columbia, Puerto Rico, and the US Virgin Islands. Fifty-four people have died in 27 states and DC — and more deaths are being investigated.

But two pieces of the complex puzzle seemed to find their place Friday: when it all started, and what’s causing the majority of the cases.

A new analysis out of the Centers for Disease Control and Prevention, published in the New England Journal of Medicine, suggests the disease may have actually surfaced in January 2017, long before June 2019, when the current outbreak began.

The authors of the paper used data from the National Syndromic Surveillance Program — a post-9/11 system that was developed to detect bioterrorism attacks — to try to root out when e-cigarettes or vaping were first mentioned as the reason for visiting emergency departments across the country. They overlaid those findings with data from Google searches and cases reported to the Centers for Disease Control and Prevention to see if the trends lined up.

What they found was that e-cigarettes began to be mentioned as the reason for emergency room visits as early as January 2017 — the earliest data the researchers looked at. Though the authors couldn’t say whether or not these cases were EVALI, they found the trend in emergency rooms continued and increased for more than two years, until June 2019 — when the number began rising sharply, and finally peaking in September. The sharp increase and peak mirrors data CDC was using to track EVALI. It also coincides with the first known “cluster” of the disease — or sign there was a widespread problem.

In a second new study, also published in NEJM Friday, researchers found vitamin E acetate — an oily substance added to some THC vaping liquids to thicken or dilute them — in lung fluid samples taken from 48 of 51 EVALI patients from 16 states — but not in a variety of comparison patient groups.

These data suggest two things: First, “The number of cases had been increasing prior to this spike, suggesting some level of under-detection prior to the outbreak in June,” said David Hammond, a public health researcher at the University of Waterloo in Ontario who studies the North American vaping market, and who was not involved in the studies. Second, the findings suggest that some contaminant — most likely THC oils like vitamin e acetate — became more widely vaped last summer, and that it’s likely responsible for the cases. “If the cases are primarily caused by the general effects of vaping, one would not see this type of spike,” Hammond added.

Kathleen Hartnett, a lead author on the study and epidemiologist at CDC, warned that while the outbreak may have peaked, it’s still not over. “Hospitalizations associated with the use of e-cig or vaping products continue at higher rates than before the summer and really do remain a concern.”

Vitamin E acetate is playing a key role in the outbreak

Since the last fall, health officials have said THC vape products are playing a major role and the main chemical contender has been Vitamin E acetate.

The chemical is a synthetic form of vitamin E, and it’s used — safely — in nutritional supplements and skin creams. But it isn’t safe to inhale. Sticky and honey-like, it can hang around in the lungs, interfering with how they function.

“We are confident vitamin E acetate is strongly linked to the EVALI outbreak,” said Anne Schuchat, principal deputy director of the Centers for Disease Control and Prevention, in a press briefing Friday following the NEJM papers.

The new study pointing to vitamin E acetate builds on prior research, also indicating the chemical is a key culprit. Samples taken from 29 patients in 10 states, for a recent CDC Mortality and Morbidity Weekly report, found the chemical in all samples, while other potential toxins — such as plant and mineral oils — weren’t.

Of the 419 THC-containing products the Food and Drug Administration has tested, 50 percent contained the sticky substance as of November 8. Recent data from Utah found the chemical in 89 percent of the THC-containing cartridges tested there. New York State — where health officials were first to signal concern about vitamin E acetate — found vitamin E acetate in many of the THC vaping cartridges used by patients suffering respiratory illness.

For now, CDC is advising people not use THC-containing vaping products, especially those from informal sources, and that vitamin E acetate shouldn’t be added to e-cigarettes.

Black market cannabis suppliers have been known to use vitamin E acetate — but legitimate suppliers may be using the chemical, too

State and federal investigations have also found many of the THC products people reported using were cartridges purchased through informal or black market sources. And vitamin E acetate has reportedly been used as a cheap cutting agent by illicit cannabis suppliers.

But even in states where cannabis vaping products are manufactured by legitimate sources, regulators haven’t necessarily been checking for the presence of vitamin E acetate.

Cannabis is subject to a patchwork of state-level health regulations where it’s legal or decriminalized. As I reported recently, these regulations are generally weak and inadequate, revealing a problem in cannabis oversight in this country.

So in Washington state, for example, the Liquor and Cannabis Board regulates the recreational cannabis marketplace, and products are tested for “potency, moisture, foreign matter, microbiological, mycotoxins (fungi), and residual solvents,” according to a spokesperson there. But only medical-grade products are also tested for pesticides and heavy metals. The list of tests also doesn’t include checking for chemicals, such as vitamin E acetate, that have emerged as a health threat. “Until only recently with the outbreak of the vapor associated lung injury crisis, no one suspected additional safety tests should be considered,” a spokesperson for the board said.

That’s why, with the mounting death toll, some experts are calling for more stringent oversight.

“How confident [are state regulators] that some of the ingredients used in vape oils are safe?” Hammond said previously. “I don’t know if anyone knows that. It’s the manufacturer’s job to make sure products don’t include harmful chemicals. But the whole concept of vaping from liquids is fairly new and we don’t have a lot of certainty.”

“For the first time in my life, I had money in my savings”: Workers on the relief of the $600 benefi...
What Maxine Waters actually said about the Chauvin trial
Trump's race-baiting campaign will fail - CNN
Tech billionaire Marc Benioff used to give millions to politicians. Then he bought Time magazine.
Can bite-sized sessions of therapy help kids struggling with depression?
Biden promises to appoint a black woman to the Supreme Court