The weekend in impeachment news, explained 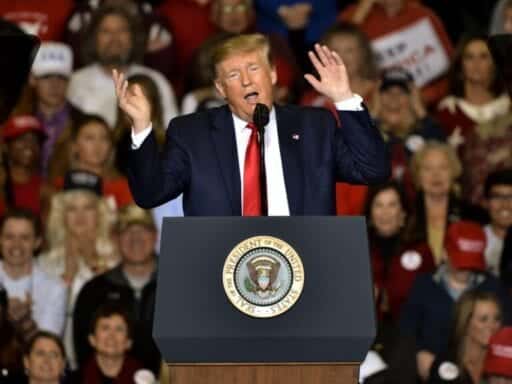 Deposition transcripts have been released and Trump has threatened a White House staffer.

If anyone thought impeachment would lose steam weeks after House Democrats announced the start of an inquiry, this weekend is yet another reason to think again.

The infamous whistleblower — who kicked off the entire drama by chronicling the Trump administration’s pressure campaign toward Ukraine — through their lawyer on Sunday offered to answer written questions from Republicans. President Donald Trump’s allies argue the whistleblower favors Democrats and doesn’t have direct knowledge of the situation, which is partly why they want to unmask the intelligence official.

But even if Republicans agree, it’s unlikely that written testimony would be enough. “I think written interrogatories are very helpful prior to live testimony,” Rep. Matt Gaetz (R-FL), a staunch Trump ally and opponent of the impeachment inquiry, told me.

Also on Sunday, Trump threatened one of his own staffers for having testified in the House Democrat-led impeachment process. Army Lt. Col. Alexander Vindman, a Ukraine expert in the White House, provided damaging information to lawmakers last week about how the administration tried to get Ukraine to open new investigations into Joe Biden and his son in exchange for much-needed US military aid.

The president is clearly unhappy about Vindman’s testimony: He labeled him a “Never Trumper” and vowed to offer proof of that “real soon” in statements to reporters.

On Monday, two transcripts of closed-doors depositions were released by the Democrat-led impeachment inquiry. It’s still too early to know what information they contain (Vox will have more information on them later), but it’s clear that more and more will come out soon.

The day before, Rep. Jackie Speier (D-CA), a member of the House Intelligence Committee, told CBS’s Face the Nation that transcripts could be released within the next five days. They could provide even more damning information about the administration’s Ukraine quid pro quo scheme and set the scene for dramatic public hearings later this month.

Likely in an effort to ensure nothing further hurts the president, four administration officials who were scheduled to testify on Monday didn’t show. One of the no-shows, National Security Council lawyer John Eisenberg, could be a major witness. Multiple officials let him know about their Ukraine policy concerns and he is said to have direct knowledge of why a transcript of Trump’s July 25 phone call with Ukrainian President Volodymyr Zelensky was placed in an ultra-secret system.

This past weekend, then, has set up a very contentious future, one in which a major political party asks for more from a whistleblower, the president openly attacks his own staff, Democrats reveal more problematic information, and Trump officials refuse to cooperate with the House inquiry.

If you missed any of it because you wanted to enjoy your weekend, don’t worry. We got you covered.

6/So we have offered to @DevinNunes, Ranking HPSCI Member, opportunity for Minority to submit through legal team written questions to WBer. Qs cannot seek identifying info, regarding which we will not provide, or otherwise be inappropriate. We will ensure timely answers.

This is a new offer, as the whistleblower previously said they would answer written questions submitted by the entire committee. Now, the still-unknown intelligence official says they will respond to questions from Republicans directly with no need for Democratic involvement.

This is potentially a big deal, as it would be the first time the whistleblower provided more information since their complaint was released in late September. It would also give Republicans a chance to have their many concerns satiated, particularly those about the whistleblower’s alleged fealty to Democrats and collusion with House Intelligence Committee Chair Adam Smith’s office.

But early signs show that Trump’s allies still aren’t happy with the proposal. When I asked Gaetz if he still wanted the whistleblower to testify publicly on camera, he responded, “Of course. They’re trying to overturn the result of a presidential election. You don’t get to do that in America by only taking the essay portion of the test.”

The Congressman didn’t answer follow-ups about why impeaching and removing Trump — giving Vice President Mike Pence the top job — would amount to overturning an election.

It’s becoming increasingly clear that Republicans won’t be satisfied until the whistleblower is unmasked. That’s worrisome, as federal laws protect whistleblowers from revealing their identity. That key rule is in place to give administration officials the confidence to come forward without worrying about reprisals.

Which means the Republican strategy of trying to expose the whistleblower could stop future potential whistleblowers from saying anything. If that happens, corruption and other misbehavior could continue unchecked inside the government.

The president has a new line of attack. It doesn’t have the same pithiness or power as his “no collusion” refrain during the Mueller probe days, but it’s one that he’s clearly fond of.

Trump says administration officials testifying in the impeachment inquiry are nothing more than “Never Trumpers,” the catch-all term for Republicans and other Americans who oppose the president at all costs. He went so far as to call them “human scum” in an October tweet.

Trump has levied that attack on Vindman, a current White House Ukraine expert and Army lieutenant colonel who spoke to investigators last week. When asked by a reporter on Sunday what evidence he had that Vindman was a Never Trumper, the president simply said “we’ll be showing that to you real soon.”

That’s the president openly threatening to release information that could damage the reputation of one of his staffers, who also happens to be a Purple Heart recipient for being wounded in Iraq by a roadside bomb.

It makes sense why Vindman is in Trump’s crosshairs, though. The staffer offered a damaging assessment of the president’s Ukraine plans, saying that top administration officials made it clear to Ukrainians that they needed to open probes into the Bidens and Democrats in order to secure US military aid and a Trump-Zelesnky meeting.

Describing a call between the two presidents on July 25, Vindman said, “I did not think it was proper to demand that a foreign government investigate a US citizen, and I was worried about the implications for the US government’s support of Ukraine.”

Any probe into the Bidens and Burisma, the Ukrainian gas company on whose board Hunter Biden sat, “would likely be interpreted as a partisan play which would undoubtedly result in Ukraine losing the bipartisan support it has thus far maintained. This would all undermine US national security,” he continued.

Trump’s threat toward Vindman highlights the administration’s new strategy. It can’t defend the president on the merits of the case after a parade of officials have said the same thing: that Trump led a policy to pressure Ukraine into investigating the Bidens and Democrats. Instead, they’ve chosen to delegitimize anyone corroborating the scheme — even if they work inside the White House.

Which means no one, not even military officers who put their lives on the line in American wars, is safe from the president’s wrath.

Impeachment transcripts have been released

Many opening statements from impeachment inquiry witness have leaked out, already providing a damning picture of Trump’s allegedly corrupt Ukraine policy. But hours and hours of closed-door testimony, certainly chock-full of juicy new details, remained secret — that is, until Monday.

Testimonies from former US ambassador to Ukraine Marie Yovanovitch and former top State Department official Michael McKinley were released on Monday afternoon by the House Intelligence Committee. These could be potentially damaging to the president, as Yovanovitch was removed from her post early due to false perceptions that she hated Trump, and McKinley was very close to Secretary of State Mike Pompeo.

Speier, the House Intelligence Committee Democrat, signaled that full transcripts of closed-door depositions might come out this week.

This is all certainly unwelcome news for the White House. The opening statements alone have repeatedly shown that there was a quid pro quo for Ukraine: Look into the Bidens and you’ll get your money and meeting. That’s honestly anyone in Congress needs to know before deciding whether or not it meets the “high crimes and misdemeanors” threshold for impeaching the president.

But it’s possible new information could add fuel to the fire if more damaging information from testimony comes out. In particular, it’ll be interesting to see what former special envoy for Ukraine Kurt Volker and US ambassador to the European Union Gordon Sondland said, as they both said they had nothing to do with the quid pro quo scheme.

Of course, there’s a chance that some details could help the president’s case, making it all seem a lot more innocent than it appears. Based on what is already publicly available, though, the better bet is that it’ll get worse for Trump before it gets better.

Trump’s efforts to stop administration officials from testifying appears to have worked on Monday as all four staffers scheduled for depositions didn’t show, even though they all likely could’ve provided useful testimony.

Robert Blair, an assistant to the president and senior adviser to chief of staff Mick Mulvaney, could provide insights as to top White House conversations. Brian McCormack, a staffer at the Office of Management and Budget, could detail what that office knew about the hold on military aid to Ukraine. And Michael Ellis, a National Security Council lawyer, certainly has knowledge of the concerns White House officials had about the Ukraine policy.

They all said they won’t appear because an administration lawyer can’t be present.

The biggest loss for lawmakers, though, is not hearing from John Eisenberg, the National Security Council’s chief counsel. Eisenberg, who cited executive privilege as the reason he can’t testify, is at the center of many witness’s stories.

Vindman said he reported his “concerns” to the lead lawyer, who in turn said he should keep those worries quiet. Fiona Hill, formerly the top Russia expert on the National Security Council, said she went to Eisenberg after then-National Security Adviser John Bolton instructed her to following troublesome meetings between Sondland and Ukrainians.

And the CIA’s lead lawyer — a Trump appointee, no less — and Eisenberg called the Department of Justice in August to say the allegations in the whistleblower’s complaint merited further examination. The DOJ, however, didn’t open a probe because that referral came in a call instead of the usual written format. (Yes, seriously.)

Oh, and then there’s this: Eisenberg reportedly directed that the July 25 call summary between Trump and Zelensky be moved to a highly classified server so only a select few could access it.

There’s no question, then, that the NSC’s chief counsel knows a lot and potentially has quite a bit to say. On Monday, at least, he won’t be sharing any of it.

Vox Sentences: Who will make history in Chicago?
Trump made a rare public appearance in DC to pay his respects to RBG. It did not go well.
The first 6.4 million doses will be a crucial test of Covid-19 vaccination logistics
J.K. Rowling’s latest Robert Galbraith novel is addictive, murderous fun
It’s not what Trump did. It’s what Republicans accept.
The seat of American democracy looks like a city under occupation