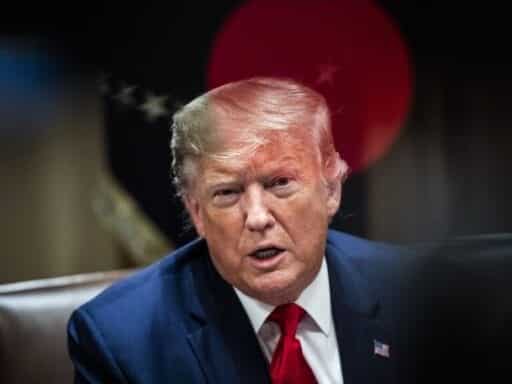 On Tuesday night, the Trump administration sent House Speaker Nancy Pelosi and her committee chairs an eight-page letter refusing to comply with their impeachment inquiry — a letter as constitutionally dubious as it was defiant.

“Your inquiry is constitutionally invalid and a violation of due process,” the letter from White House counsel Pat Cipollone states. “Your contrived process is unprecedented in the history of the nation and lacks the necessary authorization for a valid impeachment proceeding.”

The letter raises a number of procedural complaints, chief among them that the House hasn’t conducted a formal vote to authorize impeachment yet. But, simply put, that doesn’t matter. Legal experts told Vox the White House letter seems to have a fundamental misunderstanding of how the impeachment process works.

President Donald Trump’s administration could continue to raise procedural complaints to try to sway public opinion, but constitutionally, it’s not really for them to judge: The Constitution makes it clear the House has the “sole” discretion to impeach and the Senate has the “sole” ability to hold a trial.

In other words, impeachment is purely a function of the legislative branch; not the executive, and not the judicial. A 1993 US Supreme Court case around the impeachment of federal Judge Walter Nixon upheld this finding, saying the courts would not weigh in on Congress’s impeachment procedures because it could violate the separation of powers.

“The important thing is constitutionally, the president is making claims not supported by history, or fact, or previous judicial decisions,” Linda Fowler, a congressional and legal expert at Dartmouth College, told Vox. “This [letter] actually says Congress has no prerogative whatsoever with respect to the presidency.”

Fowler, for one, thinks that’s entering dangerous new territory for the Constitution, as well as messy political terrain for Trump.

Here’s what the law saws about impeachment

The Constitution contains just a handful of lines discussing impeachment. But in those scant words, it gives the House and its leaders wide latitude to decide how to handle it.

The White House letter argues the current process is not above board, saying, “In the history of our nation, the House of Representatives has never attempted to launch an impeachment inquiry against the president without a majority of the House taking political accountability for that decision by voting to authorize such a dramatic constitutional step.”

Republicans are primarily making an argument based on precedent. The House took a formal vote in the last two impeachments of Presidents Richard Nixon and Bill Clinton, but there is no law stating the House must hold a full vote to authorize an impeachment inquiry before they proceed with one. And, in the case of Nixon, Congress was investigating the president months before the House held a formal vote to authorize impeachment.

As a recent article from Congressional Research Service legislative attorneys Todd Garvey and Jared Cole notes, the House has a number of options to choose from for dealing with impeachment. They could vote on a resolution approving an impeachment inquiry that helps give their committees or a new select committee more investigative power.

Or, they could go another route — which looks a lot like what the House is doing now. Here’s what the Congressional Research Services report says about that:

Rather than considering a resolution that expressly authorizes an impeachment inquiry of the President, the House might take the position that such an inquiry is already underway, and opt to allow its committees to continue their ongoing investigations or begin new inquiries using their existing investigative tools and authorities. It is because those existing investigative tools and authorities have grown over time — and now include allowing committee chairs to issue subpoenas and committee staff to take depositions — that the practical need for obtaining additional powers from the House may have diminished.

House Speaker Nancy Pelosi and Democratic leadership haven’t yet said if they’ll hold a full floor vote to officially authorize the impeachment inquiry, but history tells us they could after an inquiry has begun. And Pelosi now has enough votes to pass a full impeachment inquiry resolution through the House if she wanted. Fowler questioned why they hadn’t already.

“They have the votes to do it, and they didn’t; they can have a vote tomorrow. That was a weakness in the strategy,” Fowler said.

Pelosi could schedule that vote whenever she wants; there’s nothing preventing her from doing so when Congress returns from its two-week break on Monday — but again, there’s nothing requiring it, either.

The courts have said impeachment is up to Congress

Even if Trump and Republicans keep hammering their argument about precedent, there’s no sign in the letter they will take Democrats to court to try to dictate how the inquiry plays out. Cipollone writes the White House hopes “you will abandon the current invalid efforts to pursue an impeachment inquiry.”

That’s probably because they know the courts will likely stay out of it: In past cases challenging impeachments (mostly of federal judges), the courts have upheld Congress’s right to impeach and have a trial. The US Supreme Court weighed in on this in 1993, when the House impeached and the Senate convicted Walter Nixon, the chief judge for the US District Court for the Southern District of Mississippi.

Nixon, who was impeached after he refused to leave office even after being convicted on charge of committing perjury, decided to challenge the decision. The Nixon v. United States case went all the way up to the Supreme Court, which dismissed the suit after finding it was nonjusticiable. Then-Chief Justice William Rehnquist wrote in the majority opinion that the Supreme Court would not review the decision, because the Constitution gave the Senate the “sole” power to convict and remove a federal officer.

That ruling could make any potential legal case against the current House impeachment inquiry extremely difficult, because the Constitution also gives it sole authority to launch proceedings.

In short, the White House’s precedent claims amount to a political ploy, not a legal one.

The mutually beneficial war between Bernie Sanders and Mike Bloomberg, explained
Bill Gates is spending $150 million to try to make a coronavirus vaccine as cheap as $3
The commodification of Ruth Bader Ginsburg
A disturbing new study suggests Sean Hannity helped spread the coronavirus
Tree planting is Donald Trump’s politically safe new climate plan
How to make sure Google automatically deletes your data on a regular basis