The world’s most profitable company is about to go public 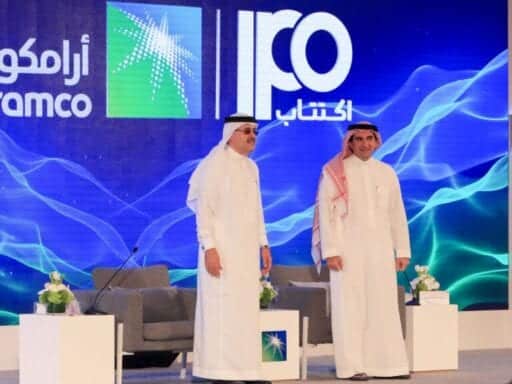 The oil company that made Saudi Arabia rich is going public. Some say the timing couldn’t be worse.

Pop quiz: What’s the most profitable company in the world? Apple? Google?

Nope. Those two don’t even come close. The answer is Saudi Arabia’s state oil company, Aramco. In 2018, Saudi Aramco made $111 billion dollars in profit. The second-most profitable company, Apple, made $60 billion that year.

On November 3, Aramco officially announced its plan to go public for the first time in the company’s 86-year history. Energy historian Ellen R. Wald joined Today, Explained to explain why Aramco’s initial public offering (IPO) is such a big deal.

As the most profitable company in the entire world, she says, the company’s IPO is going to set major records. And since it’s the largest oil company in the world, it’s likely that a lot of everyday things we use — from plastic to the energy fueling our cars — touches this company.

“In the United States,” Wald says as an example, “Aramco owns the largest refinery in the entire country. And it also owns Shell Gasoline Stations in the southeastern United States. So many Americans may be buying oil — or gasoline — that is made by Aramco, and they don’t even know it.”

But some say the timing for the Aramco IPO couldn’t be worse. One reason for that: Some people think that the world has or will soon reach peak oil demand. Another, Wald explains, is the “PR nightmare” that Saudi Arabia created with the killing of Saudi dissident journalist Jamal Khashoggi:

[The killing of Jamal Khashoggi] definitely soured investors and financiers on Saudi Arabia in general. The idea is that the money from this share sale would go to support the Saudi Arabian monarchy that has done and continues to do many horrible things, both in terms of human rights. … And so there are a lot of people out there who look at that and say, “No, I’m not touching this because I don’t want to help these people.”

To understand the significance of Aramco’s upcoming IPO, you have to know the company’s history. If you want to learn all about it, here’s a lightly edited transcript of Wald’s conversation with Today, Explained host Sean Rameswaram.

What exactly is it that takes Saudi Aramco from an extremely profitable oil company to the most profitable company in the world?

The really key year here is 1972. The United States could no longer pump more oil to meet rising demand. So instead of being able to accommodate America’s vast thirst for oil at the time, they had to import oil from elsewhere. And one of the big sources of that was Saudi Arabia. And Saudi Arabia was pumping and pumping more to meet that demand. All of those gas-guzzling cars, they were meeting that demand.

And the Saudis took note of this. The oil minister at the time, his name was Zaki Yamani, he and other oil-producing countries in the Middle East were already united in the cartel organization we know today as OPEC [the Organization of the Petroleum Exporting Countries].

They do this in conjunction with the Arab-Israeli War of 1973, along with an oil embargo. And the effect was very immediate. The price of oil skyrocketed, and in fact caused a recession in the United States.

But what it also did was help oil companies make a lot more money from this, including Aramco and including the Saudis. And what did the Saudis do with all this cash? Well, they put it into their own palaces and into their own country. But they also used it to buy the company from the Americans. And then in 1988, the Saudis eventually renamed it Saudi Aramco.

How has [the company] changed from what it was in the 1970s to now?

In the 1970s, Aramco was basically an oil-pumping machine. They pumped oil out of the ground, and most of that was sold as crude oil to the four American companies that owned it. Now, it’s much more like an international oil company like BP or Exxon or Royal Dutch Shell or Total in that they pump oil, they have crude oil assets, but they also have a range of what we call “downstream assets,” which are refineries, petrochemical companies. And they have these in Saudi Arabia, but also all over the world.

What’s the relationship between this company and the Saudi Arabian monarchy right now?

It’s much more difficult now than it was. Their first Saudi CEO at the time, a man named Ali al-Naimi, he negotiated with the king to keep Aramco separate from the Saudi government. Yes, they have a board of directors that is appointed by the government that kind of approves their plans. But, essentially, they get to decide how much money they want to spend on capital expenditures, what kind of projects they want to do, and what their strategy is. And that’s unique amongst national oil companies.

So Aramco is not quite a national oil company, but it’s not a private oil company either. It’s somewhere in between, and it has a high degree of independence. That is changing, though. And we’ve seen that change come about since the ascension of King Salman [bin Abdulaziz Al Saud] to the throne and also of his son, the young Crown Prince Mohammed bin Salman, and they are taking a much more active role in the larger strategy of the company.

They’re not trying to run it day to day, but they are saying things like, “We want you to buy this petrochemical company” or “we want to go public and this is how it’s going to be.” And that’s been a very different thing for Aramco to have to deal with after so much independence. And it has created some tension.

It sounds like you’re saying it’s hard to separate the Saudi monarchy from Aramco.

It’s hard to separate them from Aramco in terms of the big decisions. Aramco isn’t nearly as intertwined with the government as any other national oil company. But this is the real issue with this IPO. Normally when a company does an IPO, the money is going to go to the company to expand, to do new things, but that’s not the case here.

The monarchy wants to monetize Aramco shares and to take that money that they make from the share sale and put it into things that are not involving the company. So they want to put it into their sovereign wealth fund, which is designed to make investments both in companies in Saudi Arabia to help promote economic development and diversification, but also companies all over the world international companies. And use it to make investments in tech companies and in all sorts of crazy firms that they’ve been investing in, like Magic Leap virtual reality or a tech company or Uber or Tesla.

This is supposed to be one of the wealthiest countries in the world, right? How do they need the cash for some “sovereign wealth fund” that will finance startups?

Saudi Arabia has essentially a one-trick economy, which is selling oil. And they’ve done pretty well with that. But that doesn’t always go very well for the general economy at large, doesn’t necessarily employ everyone. It doesn’t foster small-business development. It doesn’t foster a vibrant economy.

What if oil prices tank and stay low for a long time? What if the oil runs out? At some point, the oil will run out. So the Saudi government has put together this plan that’s designed to diversify the economy so that they’re no longer wholly dependent on a single commodity.

Do we have any idea how this IPO will go in December?

One of the interesting things is that this company makes $111 billion dollars in profit. That’s what it made in profit in 2018. Apple I think is the next-most profitable company, [and] only made $60 billion in 2018.

And people are not going to just toss that aside, especially in a market today when so many of the IPOs that come up are companies that don’t even make a profit and have never made a profit and may never make a profit. So when an IPO comes along for a company that is immensely profitable, it’s very hard to turn away.

If the IPO doesn’t go very well — and there’s a distinct chance that it might not go very well — it could affect other oil companies’ earnings. Although I would say that if it doesn’t go well, that’s reflective more of the Saudi government than it is of Aramco itself.

If the IPO doesn’t go very well and politically the Saudi monarchy looks bad, that could be very far-ranging, particularly for the United States, which maintains strong diplomatic ties to Saudi Arabia. So it’s something that people definitely need to be on the lookout for; this could in some ways potentially fundamentally alter the balance of power in the Middle East.

Who will win all of Tuesday’s primaries, according to the polls
Hundreds celebrate George Floyd’s life at a memorial service as protests continue worldwide
A stranded oil tanker at risk of spilling in the Caribbean looks to be safe — for now
Trump wants the military to build the border wall. It might not be legal.
The NBA has suspended its season due to coronavirus
How Miss Americana director Lana Wilson found the real Taylor Swift