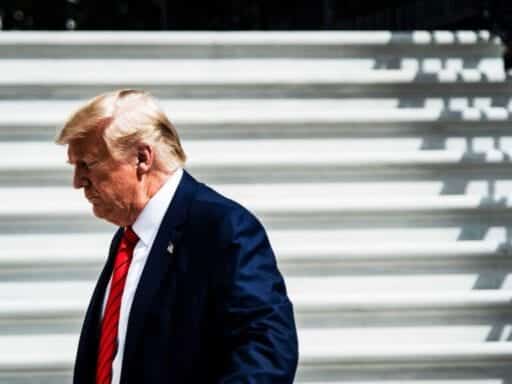 “The last time I traveled to the United States I stayed in New York near Central Park and I stayed at the Trump Tower.”

The Trump-Ukraine scandal has pushed most House Democrats to favor impeachment and properly focuses on President Donald Trump’s systematic assault on American democracy. But the quasi-transcription of the phone call between Trump and Ukrainian President Volodymyr Zelensky also sheds light on another aspect of Trump-era governance that has never achieved the level of attention it deserves: Trump’s petty and not-so-petty corruption.

Trump, after telling Zelensky that he should expect future phone calls from Attorney General William Barr and “personal lawyer” Rudy Giuliani, observes in his hazy Trumpian way that “I have many Ukrainian friends, they’re incredible people.”

Zelensky then takes the opportunity to pivot: “I would like to tell you that I actually have a lot of Ukrainian friends that live in the United States. Actually, the last time I traveled to the United States I stayed in New York near Central Park and I stayed at the Trump Tower.”

This is probably a reference to the Trump International Hotel and Tower near Columbus Circle in Manhattan rather than to Trump Tower itself, which is a few blocks away from the park and not a hotel. And it’s important not exactly because it’s surprising but because it’s a clear illustration of a dynamic that’s become all too commonplace in Trump’s Washington: People who want things from the American government make direct financial payments to companies the president runs.

It’s an absurd and infuriating situation, and its toleration is at the core of America’s current political unraveling.

Trump hotels are government for profit

Back at the beginning of the month, when much of the news cycle was dominated by Trump lying about hurricane forecasts, Vice President Mike Pence was dispatched to Poland for a state visit so that Trump could spend more time golfing while pretending to be focused on the hurricane.

On his way back from Poland, Pence decided it would make sense for him to stop over in Ireland on his way back, stay two nights, and do a day of meetings. The meetings were, of course, in Dublin, which is both the capital of Ireland and by far its largest city.

But Pence, curiously, didn’t stay in Dublin. Instead, his two nights were spent at a Trump-owned luxury resort that’s about a three-hour drive away from the capital city — commuting cross-country to make the meetings work.

This wasted a ton of time and cost almost $600,000 in limo rentals alone, but it helped line Trump’s pockets. That scandal was soon overtaken by the revelation that the Air Force had been increasingly booking rooms at Trump’s hotel in Scotland when service members needed to make overnight stopovers near Glasgow Prestwick Airport.

The airport, like basically every other airport in the world, is near a whole bunch of hotels. The Trump Turnberry Resort is 40 minutes away and much more expensive than the more conveniently located accommodations.

Trump also has subordinates in his organization kicking money up to him through his hotels. Barr hosting a $30,000 family holiday party at Trump’s hotel in DC is the best-known example of this corruption. But, as David Fahrenthold, Jonathan O’Connell, and Anu Narayanswamy reported last fall, it’s become commonplace for people in Republican politics to make sure the boss gets a cut on all kinds of political activities.

They identified a staggering $4.2 million in spending at Trump-owned properties by GOP congressional campaigns during the 2018 midterm cycle. That’s just money we happen to know about because federal political campaigns are required to itemize their expenses. Tons of other politics-related spending has no such requirements, and since Trump won’t do any financial disclosures of his own we have no idea how much money is flowing into his pockets. But what we can tell from lobbying disclosures is that the total amount is not small, and much of it comes from people trying to influence the government.

Ukraine is paying up, and they’re not the only ones

Funneling public money into Trump’s pocket by having the Secret Service rent Trump golf carts is bad. Wasting the vice president’s time, along with tons of public money, in order to have him stay at inconveniently located Trump properties is also bad. Detouring military personnel to out-of-the-way golf resorts is, similarly, a waste of time and money.

The IRS list of public corruption scandals is full of various, often obscure state and local government officials who get prosecuted and sent to jail for this kind of pocket-lining. Preventing theft of public funds is good and important, and it’s a bad sign — though a telling one — that public corruption prosecutions are down generally in the Trump era.

But this kind of graft doesn’t necessarily distort the policymaking process in the way the other kind of graft — where people who want favors from Trump pay him money — does.

Yet that’s exactly what the Ukrainians have been up to. As O’Connell and Fahrenthold reported earlier this week, beyond Zelensky’s stay we know that Giuliani and “a top Zelensky aide met at Trump’s D.C. hotel in July” while “a lobbyist who registered as an agent of Zelensky’s with the U.S. government hosted a $1,900 event at the D.C. hotel in April” according to properly filed lobbying paperwork. But what’s more, “internal hotel listings of ‘VIP’ guests at the hotel, obtained by The Washington Post, show that Lev Parnas and Igor Fruman, associates of Giuliani’s in his efforts to build connections with Ukraine, stayed at the hotel in April 2018 and were listed as Trump loyalty-card members and repeat customers.”

In this particular case, the fact that the Ukrainians were trying to curry favor with Trump seems perhaps not so bad since their underlying cause is sympathetic. As we’ve seen from the Trump-Zelensky phone call, the basic dynamic here seems to be extortion: Trump refusing to give Ukraine aid money that Congress had appropriated unless Zelensky did him favors. Funneling a few thousand dollars of hotel fees and minibar charges into the coffers of the Trump Organization is frankly less destructive than concocting corruption charges against Joe Biden.

But Ukraine isn’t the only country out there. Trump appears to be awash in Persian Gulf money, with existing reporting revealing multiple instances of six-figure checks from Saudi lobbyists or the Kingdom itself landing in Trump’s hotels. We have no idea at all what’s happening with his golf resort in Dubai. An Iraqi sheik who’s been pushing for US military strikes on Iran spent 26 nights at Trump’s hotel in DC.

Much of the reporting on this subject focuses on the question of people with links to foreign governments staying at Trump properties. That’s because this triggers legalistic issues related to the emoluments clause of the Constitution. But make no mistake, American influence peddlers — from the oil lobby to the vaping lobby and beyond — are paying Trump, too.

Beyond the emoluments clause

The problem with viewing this in an excessively legalistic way is that making a formal bribery case is extremely difficult.

As Sen. Robert Menendez’s (D-NJ) acquittal shows, under current Supreme Court jurisprudence you need to demonstrate an incredibly clear and literal quid pro quo in order to win a bribery case. That’s difficult in almost any circumstance, but it’s completely impossible without things like extensive surveillance or a cooperating witness.

You’re obviously not going to get the FBI to bug the Oval Office as part of an ongoing corruption probe targeting the president of the United States, and even when you do have cooperators, it’s simply extremely rare for the nexus of money and political favors to involve the level of explicitness that current law requires.

The saving grace is that in general there are ethics rules binding public officials. If a police officer is accepting large cash gifts from a drug dealer or if a guy is paying city officials’ kids’ tuition at private school while winning lucrative city contracts, that’s illegal right there whether or not you can establish the quid pro quo.

Federal conflict of interest law, however, specifically exempts the president and vice president from the normal legal rules. The theory is that politics ought to constrain their behavior. But in practice, the political system focuses very heavily on the legal details. There is a constitutional prohibition on the president receiving “emoluments” from foreign governments, so the lure of illegality has focused a lot of attention there. The O’Connell/Fahrenthold reporting on Ukrainian payments to Trump goes out of its way to say “it remains unclear whether the stays were illegal” because of various questions about the exact details of the timing.

This says more about the backward state of American law and politics than anything else. It’s not appropriate for the president to be receiving direct cash payments from people with business before the federal government. He’s given wide legal attitude to do so on the apparent theory that the political system will constrain presidential misconduct.

But that doesn’t work if Congress and the public are trained to assess presidential conduct in narrow legalistic terms. You need common sense: The president of the United States should not be taking money from people who are asking him for favors.

Better Call Saul is nearing its end game. Here’s how long its showrunner thinks it has left.
Plants are in demand, but it hasn’t been easy for the stores that sell them
The House passed a bipartisan bill that could legalize 325,000 unauthorized immigrants
New York’s antibody tests, Georgia’s partial reopening: Friday’s coronavirus news
The FDA approves a coronavirus test that can give results in 5 minutes
Why Jeff Sessions thinks Christians are under siege in America