There might be a shortage of election poll workers. Corporate America wants to help. 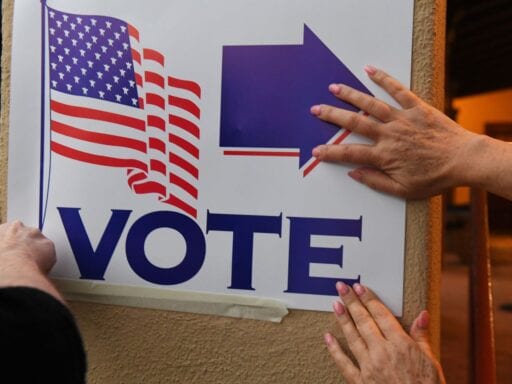 Old Navy, Target, Warby Parker, and Compass Coffee are paying employees to vote and work at the polls.

On August 31, Civic Alliance announced that more than 60 of its “member companies” — which include Starbucks, Old Navy, Target, and Microsoft — will work to encourage employees and consumers to serve as poll workers. The organization set a recruitment goal of 350,000 poll workers, the projected number of staffers necessary to keep precincts up and running smoothly.

The 2020 election is less than two months away, and for months, voting rights organizations have sounded the alarm bells about the possibility of a poll worker shortage. Poll workers are the community members who greet voters at their local precinct, check their registration, and direct them to voting booths. According to Pew’s Stateline, these staffers’ presence could be “the difference between a smooth election and long lines, mass confusion, and miscounted ballots.” Anyone over 16 can sign up to work during Election Day and be compensated for their time. However, a majority of these crucial workers are usually senior citizens, who are likely to refrain from working at the polls out of concern for their health during a pandemic. Even prior to the coronavirus, however, nearly 70 percent of states and jurisdictions have struggled to recruit a sufficient number of staff.

The responsibility of poll worker recruitment should theoretically fall on local and state policymakers, but currently, corporations are jumping in to fill this gap and partnering with bipartisan voter organizations, like Civic Alliance and Power to the Polls, to address the shortage.

Old Navy, a subsidiary of Gap, Inc., announced on September 1 that its employees would receive a day’s worth of pay if they signed up to work at the polls. Target, Warby Parker, and DC-based coffee chain Compass Coffee will also give workers paid time off to serve as election workers. On top of these efforts, high-profile companies like Starbucks, Twitter, PayPal, Walmart, and Uber have said they plan to give workers time off to vote. Some are offering workers as little as three hours of paid leave while others are giving employees Election Day off.

Poll workers are needed now more than ever. We’re proud to offer paid time off to our team volunteering on Election Day, and we want YOU to join us. By volunteering you are making a real and meaningful difference in our democracy. Check out @PowerThePolls for more info! pic.twitter.com/HsJCtmnvow

Heather Marshall, a café manager at Compass, told Vox that in previous years, she had voted via absentee ballot, and that the thought of serving as a poll worker hadn’t really crossed her mind when she was a college student. “Given the pandemic, I wasn’t sure what this year would look like in terms of in-person voting,” she wrote via email. “So when [Compass employees] were approached with the idea [to be poll workers], I knew it was something for which I needed to volunteer my time. I want to be any part of the effort to ensure a free, fair, and Covid-19 safe election.”

This push from employers like Compass to staff up the polls is the latest move by corporate America to encourage civic participation, as companies take on a “pro-democracy and pro-voter” stance without fear of alienating the political views of any given customer or employee. In 2018, Bloomberg reported that a record 44 percent of US firms committed to giving workers paid time off to vote in the midterm elections; this was an increase of 7 percentage points from the 2016 election, according to the Society for Human Resources Management. For the 2018 midterms, the outdoor apparel company Patagonia launched a campaign called Time to Vote and enlisted 411 companies that represent over 2 million workers. In addition to staffing up election sites this year, companies are also donating personal protective equipment, disseminating information about how to vote, and even offering up building space, the director of Civic Alliance told the Wall Street Journal.

American consumers and workers increasingly expect corporations to take stances, or at the very least engage on political and social issues. A 2019 case study by the Harvard Kennedy School found that consumers are more likely to buy from companies that have encouraged people to participate in the democratic process. The companies analyzed in the study, which included Snapchat, Spotify, Patagonia, Target, and Gap, had a range of voter engagement programs — from internal efforts directed at employees to public campaigns that sought to reach millions of people.

“What’s interesting is that more and more companies are making their voting policies public, which shifts the burden of knowledge away from the individual,” said Philip Chen, an assistant professor of political science at Beloit College. “Before this, if you didn’t have the civic knowledge or engagement to figure out that you are legally allowed to have three unpaid or paid hours to go vote, you probably weren’t going to vote.”

Employee voting policies, though, fluctuate depending on the company: Patagonia will shut down all of its operations on Election Day (as it did in 2016 and 2018), while Walmart will grant its employees three hours off if the hours of their shift prevent them from voting. In some cases, workers will have to give their supervisor a day’s notice about their need to leave to vote, since managers are creating “voting plans” to ensure that shifts remain staffed on Election Day.

“What’s interesting is that more and more companies are making their voting policies public, which shifts the burden of knowledge away from the individual”

These corporate-driven voter initiatives are a positive development, considering how companies decades ago remained mum on the issue. However, the growing involvement of employers — and the reliance on companies to staff polls and increase turnout — is emblematic of the US being “an outlier in established democracies,” Chen said. The US’s voter turnout rate is behind that of other established democracies: In the 2016 presidential election, the Census Bureau reported that only 61 percent of the voting-age population cast a ballot. That’s low compared to countries like Belgium (87 percent turnout) and Sweden (82 percent); America ranks 26th out of 32 developed democracies when it comes to voter participation.

Voting is not compulsory in the United States, nor is voter registration automatic or simple. Plus, there isn’t a federal holiday for citizens to take time off from work to vote. (Thanks to a federal law passed by Congress in the 19th century, Election Day always falls on a Tuesday in November.) This is unlike what other democracies have: Countries like Austria, Australia, Luxembourg, and Singapore mandate attendance at the polls, while others like France, Israel, and South Korea vote on weekends or have instituted federal holidays to encourage turnout. In the US, however, each state has established its own voting laws.

“The short answer is, these laws are entirely dependent on the state,” Chen told Vox. “Some states require paid time off, while others have universal vote-by-mail. Some have no requirements and simply encourage employers to allow their workers to vote. Most states, though, have something in the middle where workers have to meet a set of criteria to take off time to vote.”

In 13 states, Election Day is a paid holiday for state employees, although workers might only get a few hours of leave. Meanwhile, in places like Oregon and Washington, residents have ballots mailed out to them, so voting is a task primarily completed at home. With more companies actively encouraging their employees to vote and serve as poll workers, that could likely contribute to an improvement in turnout.

Yet it’s difficult to predict how the coronavirus pandemic and the Postal Service slowdown will affect the 2020 election and voter participation. During the primaries earlier this year, the Washington Post reported that some half a million mail-in ballots were rejected as a result of late delivery or voter error. Plus, as Recode’s Adam Clark Estes reported, mail service has recently been disrupted nationwide due to Covid-19 and a series of cost-cutting policies instituted by its new postmaster general, Louis DeJoy. Voting rights advocates and politicians are encouraging citizens to make a plan and vote early, and tech companies like Snapchat and Facebook are rolling out “voter checklist” features for users to easily register.

Companies are trying to reduce institutional barriers to voting, but political scientists aren’t exactly certain how having a federal voting holiday or automatic registration would increase turnout, Chen added. “These barriers absolutely have an effect, but it’s hard to figure out the exact effect.” What these corporations are looking to do is “trying to approximate the system we see in other established democracies,” he said. “They’re trying to replicate what we see with paid election holidays, which certainly helps with informing people, and it also looks good from a corporate standpoint.”

Two-thirds of US smokers say they want to quit. This company has a new idea for helping them.
Celebrities have been targets of a rash of burglaries. The new bling ring, explained.
What teen investors learned from the GameStop frenzy
Vox Sentences: Trump wins some, loses some
Facebook showed this ad almost exclusively to women. Is that a problem?
What will Thanksgiving look like this year? We asked a turkey farmer.