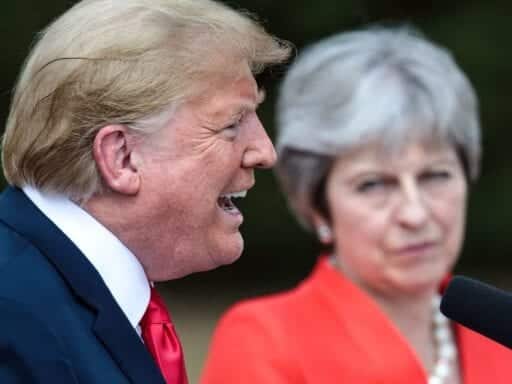 May revealed the “suggestion” Trump made to her on handling Brexit negotiations.

When United Kingdom Prime Minister Theresa May and Donald Trump met Friday, the US president had a “suggestion” on handling Brexit negotiations. May revealed what it was Sunday: He told her to sue the European Union.

During a joint press conference on Friday, both May and Trump referred to advice Trump had given to May regarding her handling of Brexit. Trump said he gave May a “suggestion” but she “found it maybe too brutal.” Still, he said he thought she might eventually go with it. “If they don’t make the right deal, she might very well do what I suggested that she might want to do,” he said.

During the same conference, Trump said he wouldn’t scrap negotiation altogether. “You can’t walk away, because if she walks away, that means she’s…stuck,” he said. But, he clarified, “she can do what my suggestion was.” As May has since revealed, that advice is to sue.

It’s not clear how the UK suing the EU would really work. The BBC points out that it’s hard to really see any grounds for a lawsuit — the EU and UK haven’t struck a final deal on Brexit yet, and the UK can’t exactly sue for a breach of an agreement that doesn’t exist:

The UK and the EU have not reached a Brexit agreement yet, so there can be no action for breach of that agreement. Parties to a negotiation are under what are known as “procedural duties” — for instance, to act in good faith. But it is very difficult to bring an action, within a negotiation, on that basis. Some would say that even attempting to do so would seriously harm the negotiation.

During the BBC interview, May emphasized that beyond Trump’s lawsuit suggestion, he also told her not to walk away from talks during the press conference. “I want to be able to sit down to negotiate the best deal for Britain,” she said.

May came to power shortly after the Brexit vote in 2016 and has taken a more moderate stance than some figures in the pro-Brexit camp. Foreign Minister Boris Johnson, Brexit minister David Davis and Brexit undersecretary Steve Baker, earlier this month quit in protest of May’s actions. Last week, May released a white paper outlining a plan for the UK to exit the EU.

Trump has often taken an antagonistic position on the EU. He has attacked the longtime ally on trade and immigration and has criticized NATO, which consists of North American and European members.

Donald Trump is really into lawsuits

It’s not necessarily a surprise that Trump would suggest May sue the EU — the president has quite an affinity for lawsuits and has used the tactic often throughout his career.

A USA Today tracker found that Trump has been involved in more than 4,000 lawsuits since the 1970s, and Bloomberg identified 1,300 legal cases since 2000 alone. Many of the lawsuits are mundane consequences of doing business — actions against gambling debtors at his casinos, employment disputes. Others, however, are more serious, such as the class-action lawsuit filed against Trump University.

Trump often threatens to sue his opponents and enemies, though he doesn’t always follow through. During the 2016 campaign, for example, he threatened to sue the New York Times over its reporting on allegations of sexual misconduct against him and said he would sue his female accusers. He still has not. It’s unlikely the UK will wind up suing the EU, either.

Hurricane Florence: what we know about the storm heading for the Carolinas
The police want your phone data. Here’s what they can get — and what they can’t.
Randy “Ironstache” Bryce wins Democratic nomination to flip Paul Ryan’s House seat
The Trump administration knew exactly what it was doing with family separations
Trump to meet with House Republicans Tuesday on immigration
The UK government’s own assessment of what a no-deal Brexit looks like is dire