These 4 products say everything about America’s gun problem 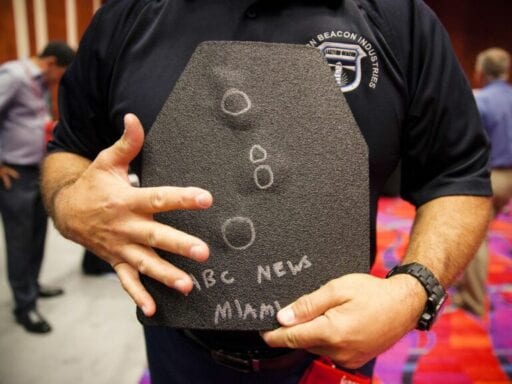 Bullet-resistant shields for classrooms shouldn’t be an easier sell than gun control.

RENO, Nevada — Laser Shot. Door Shield. PepperBall. Vendors hawked their safety products to school cops at a casino resort in Nevada this month during the National School Safety Conference. The exhibit hall was packed, with dozens of businesses selling high-tech answers — and some low-tech options — to the question on many people’s minds: How do we prepare for a mass shooting at our school?

One seller insisted that the answer is a bullet-resistant blanket nailed to classroom doors. Another vendor said schools should arm teachers with flashlights that shoot pellets of pepper spray. A chatty ex-cop said his bullet-resistant backpacks will shield children from the bullets of an AR-15.

Public schools across the country are under pressure to do something — anything — to make sure they don’t end up in the news as the latest site of a mass shooting. The February mass shooting at a high school in Parkland, Florida, which killed 17 people, has reminded parents and school officials that it’s no longer quite so rare for a teenager to gun down his classmates, and that it could happen at any school in America.

Republican leaders have once again ignored the most obvious solution — stricter federal gun laws — just as they did after Columbine and Sandy Hook. Instead, Congress is giving millions of dollars to public schools to come up with any other solution, whether that means hiring more school cops, fortifying school buildings, hiring school psychologists, or organizing school shooting drills.

The sudden influx of money is one reason the exhibit hall at the school safety conference was packed this year. A record number of businesses and nonprofits rented booths at the Peppermill Hotel Resort and Casino, according to the National Association of School Resource Officers, which hosts the annual conference. Private security companies showcased many products you would expect to see at a school safety conference, such as security cameras and metal detectors. But a striking number of vendors were selling unconventional, even bizarre, solutions to protect school children from a shooter. Here’s a sampling.

“You want to see something cool?” asked Georg Olsen, of US Armor, from his booth in the conference exhibit hall. The California-based company is best known for making body armor for police officers, but that’s not what Olsen wanted to show me. He gestured toward what looked like an oversized, canvas picnic blanket that was rolled up and bolted to a wooden panel.

With one hard tug on a red strap, the blanket unfurled to the floor. But it wasn’t a blanket at all. It’s something called Door Shield, Olsen explained, and he had it made just in time for the school safety conference. It’s essentially a panel of “soft armor” — used as cover by police SWAT teams when they raid buildings and exchange gunfire. Olsen nailed the shield to a wooden board, where it can be rolled up and mounted above a classroom door. If a shooter breaks into a school, teachers can lock the door, and with one hard tug on the canvas strap, the bullet-resistant panel rolls down and covers the door.

“Even a child can operate this,” Olsen said. He admitted that soft armor was designed to stop the bullet of a semi-automatic pistol, not an assault-style rifle like the one used in the Parkland shooting. Even so, he said, a thick classroom door and the Door Shield together would definitely stop the bullet of a long rifle.

I pointed out that the $1,995 price tag would make it expensive for schools to buy one for each classroom. Olsen wasn’t fazed. “It’s cost versus value,” he said. “The cost of [Door Shield] versus the value of a life.”

The two sales guys at the PepperBall booth said they had a solution for schools that don’t want teachers to carry guns: weapons that shoot pepper bullets. Their company specializes in ammunition designed to be non-lethal, like the PepperBall guns they normally sell to police officers. The guns shoot bullets filled with pepper spray, or pellets that can break glass in case of an emergency.

For teachers who are intimidated by the pepper guns, the company has another product, Erik Leslie, VP of sales for the company, said. It’s called the LifeLite PepperBall Launcher.

Leslie showed the launcher to me, and it looked just like a heavy duty flashlight, which it is. But then he pushed a lever on the side, exposing a hidden red trigger (he prefers to call it a “button”). A laser beam shot out to mark the target. Then Leslie walked over to a makeshift target and pressed down on the trigger five times, which made a loud popping sound as each PepperBall bullet shot out. The bullets, about the size of a marble, were filled with talcum powder — just for training purposes.

In real life, or in the event that a teacher comes face to face with a shooter, the bullets would be filled with Pava, a chemical compound that irritates the eyes and constricts the throat.

“The bad guy will be too busy coughing to keep shooting,” Leslie said. Then he let me try it:

It took a few tries to figure out the right amount of pressure to activate the trigger, but it was otherwise easy to shoot. Teachers might want training before using the launcher, Leslie said.

The PepperBall launcher, which sells for $299, wasn’t made with teachers in mind. The company originally marketed the product to truck drivers, campers, and other civilians who wanted to protect themselves without carrying a gun. But sales of the LifeLite weren’t great, Leslie said. Then the Parkland shooting happened, and schools started talking about giving teachers guns to protect their students — a highly controversial idea. Leslie thought the flashlight launcher struck the right balance between giving teachers guns and giving them nothing.

Obviously, the product is no match for a person with an AR-15 rifle.

Leslie agreed. “This is not going to take down a bad guy, all it will do is buy a teacher some time until the cops can get there.”

“Here’s a backpack that will save your life,” said Weaver, picking up one of the models he was showcasing at the conference.

Weaver showed me the two slim polyurethane plates nestled in each bag. Then he pointed to the bumps on the plates from the AR-15 bullets he shot them up with. “It didn’t go through,” he said.

Weaver owns Eastern Beacon Industries, a company that makes tactical gear and accessories for civilians. He began in January selling his ballistic backpacks and laptop cases, which run from $500 to $800 each, to urban professionals who feared getting caught in the middle of a gunfight.

After Parkland, however, Weaver said he began getting a lot more interest from parents. They wanted to know if he made backpacks for kids. Not yet. Weaver is designing a line of colorful backpacks for teens and kids, which he plans to have on the market in September.

“I never intended to sell these to children,” he said.

Weaver gave me a quick demo to show how fast he could unzip the backpack to release the two plates of body armor:

Now Weaver is waiting to get a patent on the child-sized version. “I’ll email you when they’re ready,” he said.

One booth in the exhibit hall was always crowded with school police officers and administrators. At first, it seemed like they were playing video games on a huge projector screen. They weren’t.

The booth belonged to Laser Shot, a company that makes virtual shooting simulations to train police officers. With a fake gun that resembles a Glock-17, police officers can practice target shooting to react to a variety of scenarios: a home hostage situation, a bank robbery, a mall shooting. More recently, Laser Shot added school shootings to the library, including one in which a teenage boy terrorizes a high school with a semi-automatic rifle.

A salesperson for Laser Shot showed a school administrator how to hold the fake pistol to test out the school shooting scenario. She was curious if the program would help train school cops in her state of Alabama.

Students appeared on screen and began screaming; some hid behind tables in what looked like a high school library. Then the shooter popped up from behind a table and pointed his gun at Marilyn Lewis, who was testing out the program. She shot him twice and missed. Then she shot him in the chest. He fell to the floor. Everyone at the booth applauded.

Read Vox’s coverage of the National School Safety conference to find out what schools are doing (and what lawmakers are not doing) about mass shootings at US schools.

The John Travolta Gotti movie is waging a Trump-style war on critics
How a 50-year-old report predicted America’s current racial reckoning
3 renters on getting screwed over by landlords during the Covid-19 housing crisis
Anatomy of a lie: where Trump’s fictitious “Open Borders Bill” comes from
Democrats see an upside to Trump stonewalling their impeachment inquiry
Avengers: Endgame’s new end-credits scene is Hulk-centric