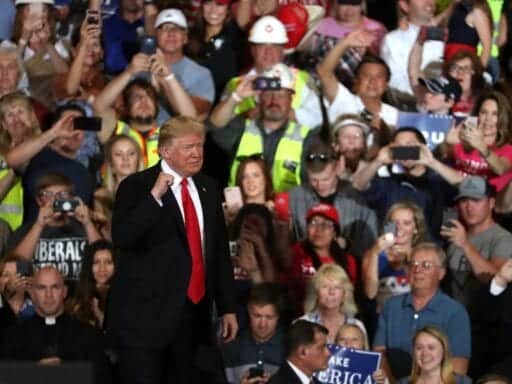 “It’s about the survival of the Christian nation,” said one woman — expressing the white backlash politics at the heart of Trumpism.

Newspapers love to send correspondents into “Trump country” to interview the president’s supporters, an exercise that’s so common and so often pointless that it’s become a kind of joke among reporters. But this weekend, the Washington Post published a piece by Stephanie McCrummen that put a new twist on the old genre: going to church. The result was one of the most revealing pieces I’ve read on Trump’s America in quite some time — a piece that shows just how racial and demographic anxieties work to make support for Trump.

One conversation, between First Baptist parishioner Sheila Butler and her friend Lisa, veered away from the conventional answers like abortion and the Supreme Court. They argued that Trump’s harsh anti-immigration policies — which would seem to contravene Jesus’s teachings about loving thy neighbor — were actually godly because they were in defense of America’s Christian majority. The discussion, as recounted by McCrummen, is fascinating:

“Obama was acting at the behest of the Islamic nation,” [Sheila] began one afternoon when she was getting her nails done with her friend Linda. She was referring to allegations that President Barack Obama is a Muslim, not a Christian — allegations that are false. “He carried a Koran and it was not for literary purposes. If you look at it, the number of Christians is decreasing, the number of Muslims has grown. We allowed them to come in.”

Linda nodded. It wasn’t just Muslims that posed a threat, she said, but all kinds of immigrants coming into the country.

“Unpapered people,” Sheila said, adding that she had seen them in the county emergency room and they got treated before her. “And then the Americans are not served.”

Love thy neighbor, she said, meant “love thy American neighbor.”

Welcome the stranger, she said, meant the “legal immigrant stranger.”

God was using Trump just like he had used the Apostle Paul, she said.

“Paul had murdered Christians and he went on to minister to many, many people,” Sheila said. “I think he’s being molded by God for the role. I think he’s the right man for the right time. It’s about the survival of the Christian nation.”

It’s tempting to just dismiss these ideas — that Christian obligations to charity should only apply to people with the proper passports and papers — as rank justification for bigotry. But it’s worth going a level deeper, to try to understand why someone like Sheila could say things like that.

And the last line, about “the survival of the Christian nation,” is crucial to doing that. Because this sense of existential threat is, according to the best research we have, a vital reason why Trump’s brand of white identity politics has attracted so many followers — and will likely continue to attract more in the future.

Demographic change, “status threat,” and the rise of Donald Trump

In 2014, psychologists Maureen A. Craig and Jennifer A. Richeson published an article on an experiment in which they asked a group of white participants questions about their attitudes toward diversity and racial tolerance. Before the questions began, a randomly selected subgroup of participants were told to read an article on the Census Bureau’s projection that America would be majority-minority by 2050, while others simply went straight into the questions.

The results were striking. When asked to rate their feelings toward minority groups on a scale of 0 (poor) to 100 (very favorable), the whites who read the census article gave, on average, much lower scores — suggesting that thinking about demographic change made them more hostile to minority groups:

Craig and Robinson dubbed this effect “group-status threat”: When whites felt like their control over society was slipping, they were more likely to embrace anti-minority ideas and support policies that might slow the rate of demographic change (like immigration restrictionism). When whites feel like the privileged status of their group in society is threatened, they will want to do something to preserve it.

This study wasn’t a one-off: As my colleague Brian Resnick documents, study after study has confirmed that white status threat is a major force driving white Americans to the right on issues of race and tolerance. And since the Republican Party has become overwhelmingly white, this has an effect on the party as a whole. A July poll found that 50 percent of Republicans felt that “increased racial diversity” had a negative impact on the United States, while only 43 percent thought the effect was positive.

The University of Maryland’s Janelle Wong looked at the political attitudes of white evangelicals like Sheila and found that status threat is the key reason why they, as a group, have been so overwhelmingly supportive of Trump.

“Rank-and-file white evangelicals have the most negative attitudes toward immigrants of all U.S. religious groups,” Wong writes at the Monkey Cage. “Their conservative reaction to demographic change is at the heart of their political agenda.”

This is how you make sense of the shocking, seemingly un-Christian lack of charity toward the vulnerable that you see in the conversation between Sheila and Linda.

Typically, you expect evangelical ideas to flow from religion to politics: They have a deep belief that the Bible prohibits abortion, for example, and support bans on legal abortion as a result. But in this case, Sheila and Linda aren’t starting from scripture; there’s no biblical reason to think Jesus hated the undocumented.

Instead, it’s the other way around. The sense of existential threat — that “the survival of the Christian nation” is at stake — is leading them toward a particular, racialized definition of what their faith means. The evangelical right, and the American right more broadly, is being reshaped to match the white backlash politics that powered Donald Trump’s rise.

The most radical Democratic plan to fix the Supreme Court yet
Do you burn more calories exercising in the cold? Here’s what the science says.
Watch: The Vox Book Club talks The Secret History’s class politics with Nicole Cliffe
50 Cent, Oprah, and the silencing of Black women survivors
How deepfakes could actually do some good
Trump’s lawyer calls Democrats’ demands for tax returns “a gross abuse of power”