The US has a 2.5 billion-pound surplus of meat. Let’s try to visualize that. 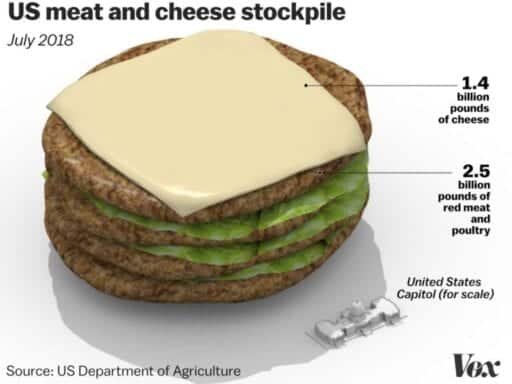 You thought the US cheese surplus was huge? Get a load of the excess meat.

There’s a lot of uncertainty these days. So here’s a comforting thought: The United States of America will not run out of cheese or meat anytime soon.

US dairy producers now have a 1.39 billion-pound surplus of cheese, according to data from the US Department of Agriculture. As the Washington Post has noted, that’s the largest domestic reserve of cheddar, Swiss, American, and other cheese varieties on record.

It means there’s enough excess cheese to arm each American citizen with a hefty 4.6 pounds of the crumbly, melty, salty good stuff. Why is this happening? Simply put: US dairy producers have been overproducing milk. Thanks to selective breeding, American cows are more productive than ever. And when demand for milk and dairy goes down in the summer, dairy producers store their excess milk as cheese, which has a longer shelf life in cold storage.

A similar glut exists for the meat industry. According to new data from the USDA, American meat producers now have 2.5 billion pounds of chicken, turkey, pork, and beef in cold storage, which is also a record, according to the Wall Street Journal. And producers are running out of warehouse space to store it all.

The meat stockpile is in part, the Journal reports, because of newly implemented Chinese and Mexican tariffs on American pork. These were set in retaliation for tariffs the Trump administration placed on Mexican and Chinese steel, among other goods. With slowing exports — and increased beef and poultry production partially due to falling prices of grain — American meat producers have more product in the freezer. Though that might be good news for American consumers, as meat prices are likely to drop a bit at the grocery store. (As Vox’s Tara Golshan reports, the escalating trade conflicts will likely impact the dairy industry as well.)

Extrapolating from the density of this popular brand of cheddar, 1.39 billion pounds of cheese would take up roughly 900,303 cubic yards. That’s a mountain of cheese, comparable to the size of the US Capitol building.

Impressive. How about the meat?

For that, we need to make a few more assumptions. Let’s say all the meat — the combined poultry, beef, and pork — is ground down into patties. Let’s also assume, for simplicity (and because we’re not interested in preparing a meat mélange burger for ourselves), that those patties have the same density as an uncooked quarter-pound beef burger.

Here’s what it would look like, with the cheese surplus melted on top, because we can. It’s a real (please forgive us for the following pun) … whopper.

Further reading: too much cheese