This week in TikTok: The dawning of the Age of Aquarius (apparently) 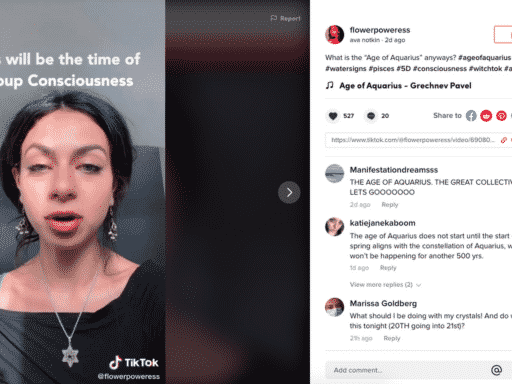 Something strange is happening with the planets right now, and TikTok is very excited.

Have you been having really weird dreams lately? Been moody? Feel achy? It’s not PMS (it might be PMS). It could be your body telling you that it was preparing for the Great Conjunction.

Astrologers and WitchTok have been extremely jazzed about the arrival of December 21, when Jupiter and Saturn were unusually close together. The winter solstice is considered a rather spiritual occurrence in many cultures, but in 2020, it’s said to be extra important: The Great Conjunction of Jupiter and Saturn supposedly marks a shift in humanity for years to come.

According to astrologer Susan Miller, the Great Conjunction “sets the tone for the ethos for the next 20 years affecting the arts, music, theatre, literature, entertainment, designer fashion, food, music, mathematics, science, politics, and the government agenda. In other words, everything!” For the past 200 years, she told Vogue, Jupiter and Saturn have met in an earth sign, but this time, they’ll meet in an air sign. “Aquarius is the humanitarian sign; you’re going to see people helping people on a grand scale,” she said.

On TikTok, yesterday’s date was an even bigger deal: Some astrologers believe that we’re entering a 2,000-year Age of Aquarius, having just emerged from the Age of Pisces, which began around Jesus’s birth. If the Age of Pisces was defined by monotheism and individualism, some TikTokers say the Age of Aquarius will be about communities and humanitarianism. That would be nice!

Here are some of TikTok’s other predictions for the era beginning on December 21: “mass third eye awakenings,” “huge technological innovations,” and “our 3D vibrations will transcend into 5D.” This kind of language is common in connection with New Age beliefs like healing crystals or the power of manifesting, where information is often stated as fact even though you’re likely to hear conflicting messages between believers. The 2,000-year astrological age theory, for instance, is a subject of dispute; astrologers throughout history have claimed to determine when the Age of Aquarius actually begins, and many have predicted that it will not occur for another few hundred years. Which is fine, of course — none of this is science, and part of what attracts people to astrology is choosing your own adventure.

But by far the best prediction that came out of the discourse around the Great Conjunction was a tweet claiming that on December 21, Black people would be given superpowers. “On December 21 our Real DNA will be unlocked and majority will be able to do things that we thought were fiction,” the woman wrote.

Then came the memes. “Black people after the December 21 update drop,” replied one user with a photo of a levitating Black man with glowing eyes. Remixes of Avengers movies proliferated, as did self-deprecating jokes like “already had the power of invisibility, ask my crush.” On TikTok, families filmed themselves getting psyched up for their superpowers, receiving the ability to teleport after presenting the proper paperwork at the DMV, and on hold with customer service with the caption “me on the 21st when nothing happens.”

“As usual, Black Twitter saw something outlandish and ran with it,” explains writer (and friend of The Goods) Athena Moore. “We’re just having fun like we always do.” It’s probably the most appropriate response to sweeping claims about massively complex topics like “the future of humanity” — no one (well, except for the original tweeter) seemed to actually believe that Black people would suddenly be able to fly. Instead, the wild pronouncement was fodder for ironic yet incredibly creative jokes.

On the other hand, maybe we should all be taking this Great Conjunction thing very seriously. December 21 seems to have gone fairly normally, but by the time you read this, all of our existing oppressive power structures could come crumbling down and planet earth could be radiating the “love frequency.” Can’t wait!

Instead of linking out to just one really great TikTok to round out the year, here are a whole bunch of them, courtesy of my Twitter thread of my favorite videos that didn’t go super-duper viral this year (some of which were probably too inappropriate to include in this newsletter!)

Elon Musk dethrones Jeff Bezos as the world’s richest person
Live results for the New Hampshire and Rhode Island primaries
“Don’t be a tough guy! Don’t be a fool!”: Read Trump’s wild letter to Turkey’s Erdogan
There have now been 50 million confirmed cases of Covid-19 worldwide
How to help a friend through a tough time, according to a clinical psychologist
Iowa shouldn’t vote first. Here’s an idea to fix the primary process.