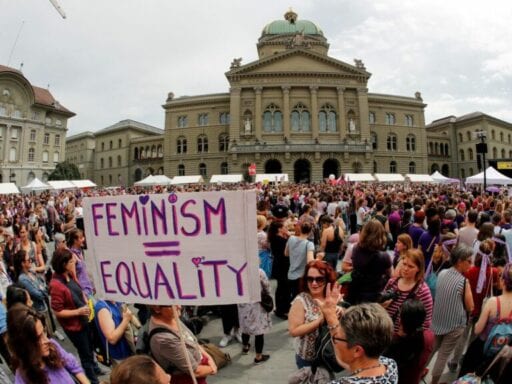 It was the 28th anniversary of another historic strike.

Thousands of women across Switzerland went on strike Friday to protest gender inequality in the country.

The women demonstrators, many clad in purple, skipped work and instead took to the streets in cities across Switzerland to call for equal pay and equal rights.

And they did so 28 years to the day after the historic 1991 women’s strike in Switzerland that put pressure on the government to better implement a constitutional amendment on gender equality. That 1991 strike led to the passage of the Gender Equality Act five years later, which gave women legal protections from discrimination and gender bias in the workplace.

Last year, the Swiss Parliament also passed an equal pay law that requires companies with 100 people or more to do wage-gap studies to determine if there are disparities in how much women and men are paid for the same work. But critics said the law didn’t cover enough employers or go far enough to punish companies that failed to remedy disparities.

Switzerland ranked 20th in the 2018 World Economic Forum’s Global Gender Gap Report, behind other wealthy European countries including Norway, Finland, France, and Germany. (The US ranked 51st.) According to Switzerland’s Federal Statistics Office, in 2016, Swiss women working in the private sector earned one-fifth less than men.

And now Swiss women are marching to tell lawmakers and employers there’s still a lot more to be done.

“It’s been 38 years since gender equality was written into the constitution, and yet this equality still hasn’t materialized,” Vanessa Monney, a Lausanne-based organizer of the strike, told France 24. “In fact we’ve seen an increase in the gender pay gap in recent years.”

Swiss women are protesting for equal rights and equal pay today and I am here for it. #Frauenstreik2019 pic.twitter.com/hKJCgsk7gA

Strike organizers called on women to walk out of work at 3:24 pm local time to reflect that wage gap if participants couldn’t strike for the full day, according to the Swiss Broadcasting Corporation.

So powerful! #Frauenstreik2019 in #Basel had the potency of thousands! There’s no way back! Women’s rights, gender balance, now! Thank you all who came and fought before us. We are still standing! pic.twitter.com/Tjid2WceTl

The protest officially kicked off at midnight. In the city of Lausanne, near the French border, a watchman climbs to the top of a cathedral’s bell tower to call out the time every hour.

But on Friday, the watchman wasn’t a man at all. According to Benjamin Dodman at France 24, four women did the job at midnight, marking the time and the start of the walkout.

#Swiss #women are on #strike today throughout the country, to urge long-delayed #equality. In Lausanne, hundreds gathered at the cathedral at midnight to start the strike, then around bonfire. #grevedesfemmes #Frauenstreik19 pic.twitter.com/h38vlAwcbX

The Swiss Parliament in Bern honored the strike with a 15-minute break in its business. In Basel, a giant fist was projected onto the Roche pharmaceutical company building. In some cities, protesters changed the names of streets to honor women. The Swiss paper, Le Temps, left sections blank for articles that would have been written or edited by women, according to the Guardian.

Seen in Lausanne. Streets renamed as women all across Switzerland are on strike today. Despite being one of the richest countries in the world, has a poor record on gender equality (20% wage gap, no parental leave for men…) #WomenStrike pic.twitter.com/9ZXDYOTnT4

“We must fight for equal pay, fair distribution of care work, abortion rights, zero tolerance for domestic violence, and more,” Rahel Lüthy, a 43-year-old who protested in Bern with her 13-year-old daughter, told the New York Times. “And most importantly: We must smash the patriarchy!”