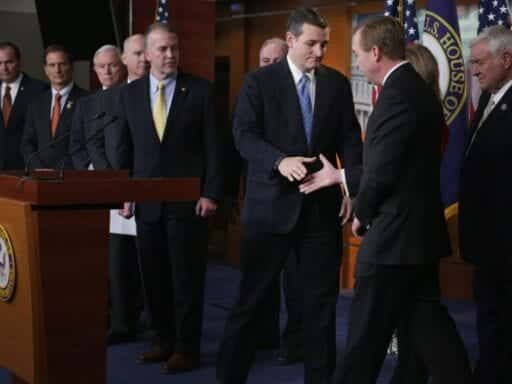 “How likable is a candidate? That still counts.”

At least one top official in the Trump administration is worried about the 2018 Senate race in Texas — because Ted Cruz is so unlikable.

Alex Burns and Ken Vogel at the New York Times on Saturday reported that Mick Mulvaney, director of the Office of Management and Budget and acting director of the Consumer Financial Protection Bureau, said in a closed-door meeting with Republican donors over the weekend that he thinks the GOP will overcome the blue wave in November. But that doesn’t mean he thinks everyone will be a winner: Mulvaney reportedly singled out incumbent Republican Sen. Cruz in Texas, who is running against Democrat Beto O’Rourke, as a risk. His reasoning? People don’t like Ted Cruz.

“There’s a very real possibility we will win a race for Senate in Florida and lose a race in Texas for Senate, okay?” Mulvaney said, according to the Times. “I don’t think it’s likely, but it’s a possibility. How likable is a candidate? That still counts.”

He was referring to the Cruz-O’Rourke race and the close contest between incumbent Democratic Sen. Bill Nelson and Republican Gov. Rick Scott in Florida.

Mulvaney also reportedly pointed to failed Republican Senate candidate Roy Moore in Alabama to highlight how the quality of individual candidates still matters. Moore lost in a special election to Democrat Doug Jones after sexual misconduct allegations surfaced, including accusations that he had several relationships with teenagers when he was in his 30s.

“The president asks me all the time, ‘Why did Roy Moore lose?’” Mulvaney said. “That’s easy, he was a terrible candidate.”

The US Senate race in Texas, a historically red state, is uncharacteristically tight this year. According to a RealClearPolitics average of polls, Cruz leads O’Rourke, currently a US representative for Texas’ 16th District, by 4.4 points. But a recent Emerson College poll found Cruz, who was first elected to the Senate in 2012, with just a one-point edge, a statistical tie.

Democratic voters across the country appear extra enthusiastic about the 2018 midterms, and there’s long been buzz about a potential “blue wave” in November. That’s boosted the prospects for many Democratic candidates, including O’Rourke.

Texas Republicans have tried to undercut O’Rourke’s campaign by focusing on parts of his past, including his days in a punk rock band and a 1998 drunk-driving arrest in El Paso. An unidentified person or group was also found to be posing as O’Rourke’s campaign and sending text messages to voters proposing voter fraud.

Cruz brushed aside Mulvaney’s comments outside of a Houston rally on Saturday, saying he doesn’t “worry about what some political guy in Washington says.”

According to the Times, Mulvaney at the Saturday meeting also suggested that Republicans might do better in the 2018 midterms if they focused less on the president and more on the state of affairs in the country.

“[Voters] may hate the president, and there’s a lot of people who do, but they certainly like the way the country is going,” he said. “If you figure out a way to subtract from the equation how they feel about the president, the numbers go up dramatically.”

Trump, of course, has no plans to stay out of the 2018 races — instead, he is likely to be a major factor in them. The White House has said that the president plans at least 40 days of travel up to the election for midterm campaigning. And with his predecessor, President Barack Obama, on the campaign trail for Democrats, it’s even less likely he’ll hold back.

According to the Times, both Mulvaney and Republican National Committee chairwoman Ronna McDaniel expressed optimism in the donor meeting, but they also acknowledged energy on the Democratic side, and potential candidate issues, such as Cruz.

Trump, ever the optimist, on Saturday evening tweeted he thinks things are looking great for the GOP.

Republicans are doing really well with the Senate Midterms. Races that we were not even thinking about winning are now very close, or even leading. Election night will be very interesting indeed!

6 Hongkongers on how the protests have transformed their lives and their city
5 polluting industries that won big from Scott Pruitt’s tenure at the EPA
North Carolina Republicans’ audacious power play, explained
Why Fox News is at the center of the impeachment story
How Joe Biden could reorient foreign policy around climate change
What’s next for Amy Coney Barrett’s Supreme Court nomination