Trump called for Rep. Adam Schiff to be arrested for treason — but treason doesn’t work that way 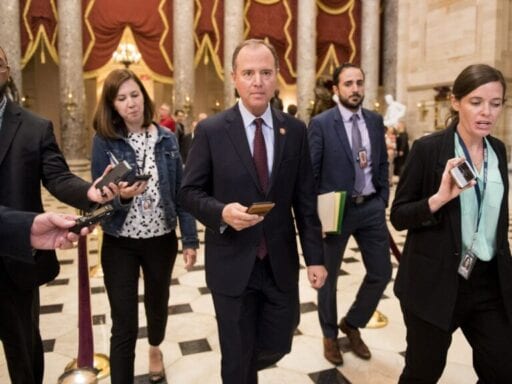 The Constitution defines treason as waging war against the United States or aiding one of the country’s enemies.

President Donald Trump is defending himself against allegations he pressured Ukraine to investigate a potential political rival in part by working to cast doubt on one of the men leading the investigation into these allegations: Rep. Adam Schiff.

Trump began by attacking Schiff’s character and stature (calling him “corrupt” and “liddle”), but in recent days has accused the California Democrat of treason.

He tweeted Sunday, “I want Schiff questioned at the highest level for Fraud & Treason,” and following that Monday with a tweet reading, “Adam Schiff illegally made up a FAKE & terrible statement, pretended it to be mine as the most important part of my call to the Ukrainian President … Arrest for Treason?”

Schiff, who chairs the House Intelligence Committee, one of the panels leading the impeachment inquiry into Trump, arguably made a misstep by summarizing the president’s statements at an open hearing in a dramatic fashion. Schiff’s critics — including the president — claim his summary wasn’t just unfair, but completely false.

Despite this, he is is no danger of being arrested for treason, because he did not commit it as the Constitution defines it — namely, waging war against the United States or aiding one of the country’s enemies.

But in leveling that charge, Trump is doing something he has often done before: casting political opposition, congressional oversight, or even standard law enforcement investigations into his actions as a treasonous attack against the country itself. And now, the president is working to use Schiff’s efforts to conduct congressional oversight against the Democrat, while minimizing the severity of the allegations he faces.

Why Trump claims Schiff “made up a FAKE & terrible statement”

As chair of the House Intelligence Committee, Schiff is leading Democrats’ investigation into a whistleblower’s complaint about potential presidential wrongdoing.

That complaint alleges Trump attempted to use “the power of his office to solicit interference from a foreign country in the 2020 U.S. election,” and that the foreign country in question is Ukraine. It claims the solicitation was a request to investigate former Vice President Joe Biden, who is currently a Democratic candidate for president, that the Trump administration attempted to hide this solicitation by placing records of it in a secure system reserved for highly classified information, and that this was not the first time potentially problematic notes had been so buried.

Trump has acknowledged asking Ukrainian leaders to investigate Biden, arguing — without evidence — the former vice president worked to shield his son, Hunter Biden, from corruption investigations in that country. The White House released a rough recollection of a conversation between Trump and Ukraine’s President Volodymyr Zelensky that contains the request, but Trump maintains he has not done anything wrong. Nevertheless, the whistleblower’s allegations have spawned an impeachment inquiry in the House of Representatives.

Part of that inquiry involves information gathering by the House Intelligence Committee, and last Thursday, Schiff conducted the first public hearing into the issue with testimony from acting director of national intelligence Joseph Maguire, who has been accused of attempting to stop the whistleblower’s complaint from reaching Congress.

In that hearing, Schiff delivered an opening statement in which he paraphrased Trump’s words in the White House’s recollection of the Trump-Zelensky call like this:

We’ve been very good to your country. Very good. No other country has done as much as we have. But you know what? I don’t see much reciprocity here. I hear what you want. I have a favor I want from you, though. And I’m going to say this only seven times, so you better listen good. I want you to make up dirt on my political opponent. Understand? Lots of it on this and on that.

Trump’s critics, like Schiff, might argue that this is essentially what Trump said. But it is, at best, a dramatic rendering of what is contained in the White House’s readout of that call, which sees Zelensky bringing up the question of Ukraine acquiring US weapons, and Trump replying, “I would like you to do us a favor though,” before requesting the Ukrainians investigate a DNC server Trump believes is hidden in Ukraine (despite his security officials having told him this is a false conspiracy theory) and ultimately asking Zelensky to investigate Joe Biden.

At the time, some, like Vox’s Aaron Rupar, called Schiff’s summary ill-advised:

Side note: Adam Schiff’s decision to open the hearing with a fictional account of Trump’s call with the Ukrainian president was a bad idea and has already been used by two Republicans to criticize him. Here’s video of how Schiff framed things: pic.twitter.com/eURjf6grDL

And now, Trump has seized upon Schiff’s summary as “FAKE & terrible” and claims he “represented a perfect conversation with a foreign leader in a totally inaccurate and fraudulent way.” The president says Schiff’s statement was not just misleading, tweeting that the representative lied “in perhaps the most blatant and sinister manner ever seen in the great Chamber.”

Schiff did not lie. He arguably may have been better served by simply reading from the White House’s record, which, as Vox’s Zack Beauchamp has written, seemed to present “more evidence for [the president’s] worst-case scenario: That President Trump was conditioning military aid to Ukraine on the country’s willingness to investigate his domestic political enemies.” But in his attempt to make plain what he sees as Trump’s corrupt intent, the congressman gave Trump an opening for attack.

The president is now able to say Schiff did not accurately reflect what is in the summary of the call, and those who have not read it themselves may take the president’s word. But Trump has also gone one step further — not only is he using Schiff’s statement to rebut evidence his White House placed in the public record, but he is accusing the Congress member of treason.

“I want Schiff questioned at the highest level for Fraud & Treason,” the president tweeted Sunday, and followed that up Monday with a call for Schiff’s arrest, again for treason.

Rep. Adam Schiff illegally made up a FAKE & terrible statement, pretended it to be mine as the most important part of my call to the Ukrainian President, and read it aloud to Congress and the American people. It bore NO relationship to what I said on the call. Arrest for Treason?

Like every American, I deserve to meet my accuser, especially when this accuser, the so-called “Whistleblower,” represented a perfect conversation with a foreign leader in a totally inaccurate and fraudulent way. Then Schiff made up what I actually said by lying to Congress……

His lies were made in perhaps the most blatant and sinister manner ever seen in the great Chamber. He wrote down and read terrible things, then said it was from the mouth of the President of the United States. I want Schiff questioned at the highest level for Fraud & Treason…..

However, Schiff cannot be arrested for treason because he did not commit it.

Trump has accused those he views as political adversaries of treason before. And each time, he has been incorrect.

A few recent examples include the president, in May, accusing the Obama administration’s FBI of having spied on him and having therefore committed treason. (The FBI did not spy on the Trump, although it did investigate the Trump campaign.) And in March, the president claimed “there are people out there that have done some very, very evil things, very bad things — I would say treasonous things — against our country.”

The FBI, the “people” Trump referred to, and Schiff have not, in fact, committed treason as it is defined by Article III, Section 3 of the Constitution. That definition is very specific:

Treason against the United States, shall consist only in levying War against them, or in adhering to their Enemies, giving them Aid and Comfort. No Person shall be convicted of Treason unless on the Testimony of two Witnesses to the same overt Act, or on Confession in open Court. The Congress shall have Power to declare the Punishment of Treason, but no Attainder of Treason shall work Corruption of Blood, or Forfeiture except during the Life of the Person attainted.

As Vox’s Dylan Matthews has explained, this section makes treason more than just a word, but a legal standard that “basically nobody apart from maybe al-Qaeda members meets in a modern context.”

Even when someone has been specifically accused of levying war against the US, it’s historically proven difficult to prosecute treason, Matthews writes:

Aaron Burr, Thomas Jefferson’s first vice president, was prosecuted for treason on these grounds and acquitted, after being accused of assembling forces to create an independent state in the center of North America. John Brown, the abolitionist revolutionary, was convicted of treason against the state of Virginia on levying war grounds after his raid on Harpers Ferry.

And that difficulty has extended to questions of aid and comfort:

Iva Toguri, who was convicted of treason after the government accused her of being “Tokyo Rose,” an English-language Japanese propaganda broadcaster meant to lower American service members’ morale in the Pacific, faced an aid and comfort prosecution; she was later exonerated and received a presidential pardon. The American Nazi propagandist Robert Henry Best was convicted after an aid and comfort prosecution in 1948.

In the case of Schiff, the lack of any grounds for a treason charge is clear. Schiff has not levied war against the US: he has not attacked a military installation or set up a belligerent, anti-American state. And he hasn’t given any foe of the US aid or comfort: He has not sheltered any members of al Qaeda or written any articles for the Islamic State’s magazine.

He has made Trump upset, and may have slightly exaggerated statements by the president, but neither of those things are mentioned in the Constitution as qualifying for a charge of treason. Schiff is safe from arrest, and is free to continue his investigation into allegations of wrongdoing by Trump, regardless of the president’s demands on Twitter.

A guide to the must-read 2020 National Book Award finalists
There’s only one presidential candidate who we know accepts money from foreign sources
The last US-Russia nuclear arms deal is about to expire. Biden wants to extend it.
Solving America’s painkiller paradox
Mail has never been more important. Here’s what it’s like to be a postal worker now.
Us is Jordan Peele’s thrilling, blood-curdling allegory about a self-destructing America