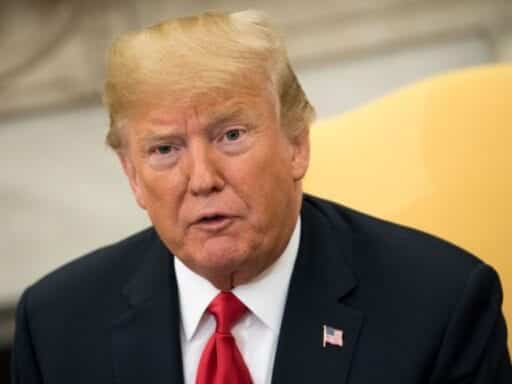 On Wednesday, Trump decried “weak” politicians calling for him to stop imposing tariffs on United States’ trade allies — and repeated a lie to make his case: The US “lost $817 billion on trade last year,” he tweeted.

Every time I see a weak politician asking to stop Trade talks or the use of Tariffs to counter unfair Tariffs, I wonder, what can they be thinking? Are we just going to continue and let our farmers and country get ripped off? Lost $817 Billion on Trade last year. No weakness!

This isn’t true — and it’s not at all clear where Trump is getting this $817 billion number. The White House did not respond to a request for clarification.

Here’s the closest we could get to Trump’s “$817 billion” trade deficit: If you only look at the trade imbalance for the exchange of goods — tangible products like steel or soybeans — the United States bought $811 billion more than it sold in 2017, according to the United States Census Bureau’s annual report.

But economists will point out that even declaring an $811 billion trade deficit is misleading. Trade deficits are calculated based on goods and services — an important distinction Trump doesn’t talk about. As it turns out, the United States is one of the biggest service producers, which includes finance, telecommunications, engineering, and education. If you account for goods and services, the United States trade deficit drops to $566 billion.

While $566 billion is still a big deficit, this omission makes a serious dent in Trump’s case.

Take Canada, for example. Trump’s relationship with Canadian Prime Minister Justin Trudeau has notably soured in recent months as the two countries are engaged in a tit-for-tat trade war. Trump claims Canada mistreats American farmers with high agricultural tariffs. Canada does have protectionist trade measures in place for industries like dairy — and overall the US buys more goods from Canada than it sells. But if you look at the overall trade relationship, the United States actually had an $8.4 billion surplus in trade with Canada in 2017, according to the Office of the US Trade Representative.

Trump appears to espouse a school of thought that prioritizes a trade of goods over services — and he’s been more than willing to act on it. The administration has imposed tariffs on steel and aluminum and billions of dollars of Chinese goods, and Trump has threatened to escalate tariffs to other industries like foreign cars.

The move has already had repercussions: US trade partners like Canada, Mexico, and China are all imposing retaliatory tariffs on products the US sells — like agriculture. Meanwhile, the Trump administration is moving forward with an emergency aid package for farmers who will likely be hurt by the trade war they started.

Supreme Court cracks down on government snooping through cellphone location records
Alaska Airlines plane stolen from SeaTac airport: What we know so far
HUGE petition against Trump in UK
The long-lost trailer for New Mutants, the highly anticipated X-Men spinoff, is finally here
Your super cheat sheet to a super big week of news
March 10 primaries