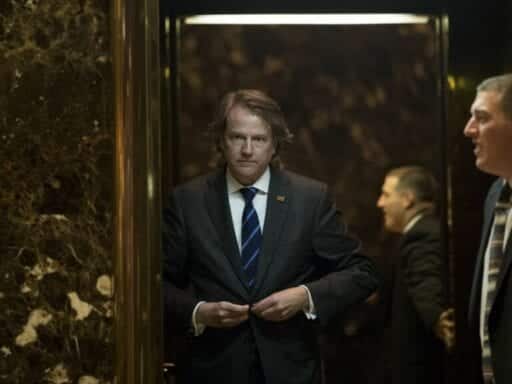 The president went on a weird Twitter rant about the White House counsel a day after he announced McGahn’s forthcoming departure.

In a tweet on Wednesday, President Donald Trump broke the news that White House counsel Don McGahn would be leaving this fall.

But then he tweeted about it again. And again.

McGahn’s exit had been whispered about for some time, particularly because the White House counsel had reportedly pushed back against Trump over the idea of firing special counsel Robert Mueller, who’s leading the investigation into potential collusion between the Trump campaign and Russia during the 2016 presidential election.

McGahn also reportedly failed to stop Attorney General Jeff Sessions from recusing himself from the Mueller probe. And McGahn’s cooperation with Mueller appeared to deepen the divide between the White House counsel and the president.

But in a series of McGahn-themed tweets Thursday morning, the president took issue with that idea that incidents involving Mueller or Sessions had anything to do with the White House counsel’s departure.

“I liked Don,” the president tweeted, “but he was NOT responsible for me not firing Bob Mueller or Jeff Sessions. So much Fake Reporting and Fake News!”

I am very excited about the person who will be taking the place of Don McGahn as White House Counsel! I liked Don, but he was NOT responsible for me not firing Bob Mueller or Jeff Sessions. So much Fake Reporting and Fake News!

Trump’s tweet is a little bizarre; even as he says McGahn wasn’t involved, he does seem to confirm that he actually did try to fire Mueller — something he’s denied before, as the Washington Post pointed out.

That alleged incident is reportedly being investigated by Mueller, as he examines whether the president committed obstruction of justice. As for Sessions, Trump often appears to be on the verge of firing him, only to be talked out of it. The president’s tweet seems to suggest that McGahn was not one of the people who persuaded him to hold back.

Trump also tweeted that the “Rigged Russia Witch Hunt” (Trump’s nickname for the Mueller investigation) had nothing to do with McGahn leaving. The New York Times reported earlier this month that McGahn has cooperated with Mueller and sat for 30 hours worth of interviews.

The Rigged Russia Witch Hunt did not come into play, even a little bit, with respect to my decision on Don McGahn!

Trump reportedly gave his approval for those discussions, but Trump’s attorneys don’t seem to be totally clear on exactly what information McGahn handed over to investigators.

And the president’s tweet also seems to confirm that Trump ousted McGahn, rather than McGahn resigning. Despite reports that McGahn wanted to exit the White House, the White House counsel was reportedly surprised by Trump’s tweet, and had not yet discussed his exit plans with the president — making him yet another administration official fired by tweet.

Trump’s tweets about McGahn’s departure didn’t stop there, either.

In another tweet on Thursday morning, the president asserted that his children also didn’t have anything to do with McGahn’s departure. The New York Times had suggested that Ivanka and son-in-law Jared had soured on McGahn, and helped force his exit.

Ivanka Trump & Jared Kushner had NOTHING to do with the so called “pushing out” of Don McGahn.The Fake News Media has it, purposely,so wrong! They love to portray chaos in the White House when they know that chaos doesn’t exist-just a “smooth running machine” with changing parts!

If his tweets are any indication, the president is clearly frustrated with how the White House Counsel’s departure was covered. But Trump seems to have only added to the confusion — and raised more questions about the reason behind McGahn’s leaving.

The president also said he was “excited about the person who will be taking the place” of McGahn in his tweets, though he declined to name the person. McGahn had reportedly wanted Emmet Flood, the administration’s attorney handling the Russia investigation, to take over his former role. But Trump hasn’t made it official yet, and it’s still unclear who’s going to step into that role.

Colorado progressives aren’t clearing the field for John Hickenlooper
Centrist Democrats are out of ideas
Morbius, Marvel’s living vampire, finally has a trailer. And a huge Spider-Man connection.
The second debate between Trump and Biden is canceled
Piers Morgan made fun of Daniel Craig for carrying his baby. The response from dads was adorable.
The best $129 I ever spent: Baby formula