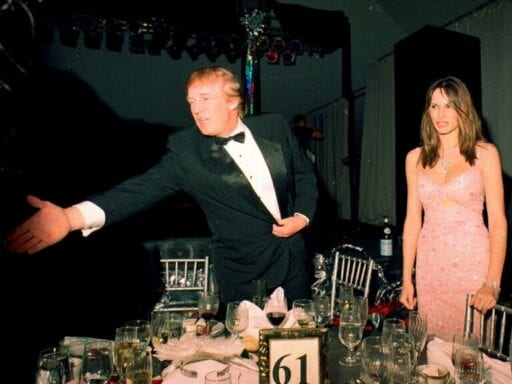 Karen Johnson is at least the 23rd woman to accuse Trump of misconduct.

A book excerpt published by Esquire on Wednesday contains a new accusation of sexual assault against President Donald Trump.

The excerpt, part of Barry Levine and Monique El-Faizy’s forthcoming book All the President’s Women: Donald Trump and the Making of a Predator, contains an account from a woman named Karen Johnson who says Trump groped her and forcibly kissed her at a Mar-a-Lago New Year’s Eve party in the early 2000s.

Johnson says she was at Mar-a-Lago with her husband and another relative when Trump grabbed her, pulled her behind a tapestry, and assaulted her. From the book excerpt:

Shortly after glittering balloons fell from the ceiling at the stroke of midnight, her husband said he wasn’t feeling well and the relative was ready to go. Johnson decided to make a quick trip to the restroom before they headed home. “I hadn’t seen [Trump] that whole entire night,” said Johnson, who was in her late thirties at the time. “I was just walking to the bathroom. I was grabbed and pulled behind a tapestry, and it was him. And I’m a tall girl and I had six-inch heels on, and I still remember looking up at him. And he’s strong, and he just kissed me,” she recounted to us. “I was so scared because of who he was. … I don’t even know where it came from. I didn’t have a say in the matter.”

Johnson said Trump then grabbed her hand and said, “You have to help me greet these guests out,” explaining that Melania was upstairs. “So I stood next to him while he greeted some guests out the door,” Johnson said. She didn’t let on that anything was amiss because she didn’t want to create an awkward situation. “I was afraid to say what had happened,” she said. “I didn’t even know how it happened.”

Johnson is at least the 23rd woman to come forward with an on-record account of sexual misconduct allegedly committed by Trump. Many of those women came forward following the October 2016 release of the Access Hollywood hot mic tape in which Trump was recorded bragging about groping women and kissing them without their consent.

Referring to that tape, Johnson told Levine and El-Faizy that “[w]hen he says that thing, ‘Grab them in the pussy,’ that hits me hard because when he grabbed me and pulled me into the tapestry, that’s where he grabbed me.”

The excerpt notes that Johnson’s account of the evening is corroborated by “documentation and photographs,” as well as by a friend who Johnson told about the assault years before Trump ran for president. Johnson is at least the fourth woman to accuse Trump of sexual assault at Mar-a-Lago, following Jill Hearth, Cathy Heller, and Natasha Stoynoff.

Johnson says that Trump pursued her in the days following the alleged assault before eventually ceasing contact.

In the days after the incident, Trump began pursuing Johnson. “He started calling me. I answered my phone and he said, ‘Do you know who this is?’ And I knew his voice. And I was wondering how he got my phone number,” she said. He called her regularly for the next week or two, she told us, offering to fly her up to New York to visit him. Johnson told Trump she couldn’t because she was taking care of her dying husband. “Don’t worry about it, he’ll never know you were gone,” she said Trump told her. “He said he’d have me back by six o’clock. This was like crazy. He was going to fly me to New York for the day to see him. I said, ‘No, no, no.’” But Trump persisted. When he was in Florida, he called and said he would send a car to bring her to Mar-a-Lago. “I kept saying, ‘No, no, no,’” she said. “I was scared. I didn’t know what to do.”

“While the president has publicly faced allegations from two dozen women, this book reveals another 43 allegations of alleged inappropriate behavior, including 26 instances of unwanted sexual contact,” a note before the excerpt says.

The Iowa caucuses are broken. Here’s an idea to fix the primary process.
A woman in ICE detention says her fallopian tube was removed without her consent
President Trump is considering pardoning himself. I asked 15 experts if that's legal.
Democrats are ready to start work on a fourth coronavirus bill. Republicans want to wait.
Donald Trump has a weird soft spot for asbestos
Trump’s reckless Middle East policy has brought the US to the brink of war