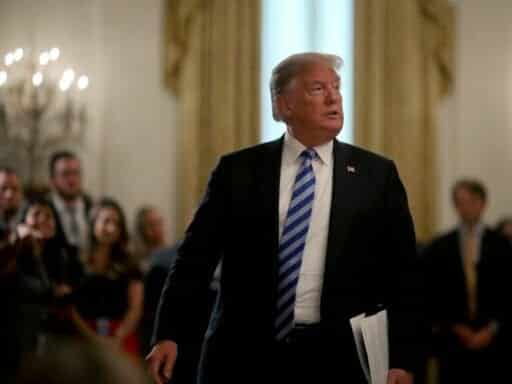 While, in isolation, the tweet is maddeningly enigmatic, most observers immediately recognized that President Trump was referring to a New York Times op-ed written by an anonymous senior official in his administration.

In the op-ed, the official describes themselves and their colleagues as “thwarting Mr. Trump’s more misguided impulses until he is out of office,” decries the president’s decision-making as “half-baked, ill-informed and occasionally reckless,” and says that early in the Trump presidency, there were “whispers within the cabinet of invoking the 25th Amendment, which would start a complex process for removing the president.”

The last part, presumably, is why Trump is calling the author a traitor.

While there’s obviously a colloquial sense in which “traitor” is used as a general descriptor of disloyal people, the term also has a formal legal definition in the Constitution, and as Sen. Lindsey Graham (R-SC) was swift to note, the op-ed doesn’t qualify:

Lindsey Graham just responded to Trump’s treason tweet on CNN: “This is not treason under the Constitution.”

Graham is right. The op-ed author isn’t guilty of treason. Nor is Trump or any member of his administration or 2016 campaign guilty of treason because of their ties to a Russian election meddling operation.

Article III, Section 3 of the Constitution defines treason as follows:

Treason against the United States, shall consist only in levying War against them, or in adhering to their Enemies, giving them Aid and Comfort. No Person shall be convicted of Treason unless on the Testimony of two Witnesses to the same overt Act, or on Confession in open Court. The Congress shall have Power to declare the Punishment of Treason, but no Attainder of Treason shall work Corruption of Blood, or Forfeiture except during the Life of the Person attainted.

As UC Davis’s Carlton Larson, one of the few experts on treason law in academia today, explained to me in 2013, this language provides for two types of treason prosecutions.

The first is an “aid and comfort” prosecution, in which the defendant is accused of aiding the war effort of a country presently at war with the United States. Not just “rivals” but literally at war. Aldrich Ames, the CIA officer turned Soviet spy, got at least 10 people killed through his actions, and FBI Russian spy Robert Hanssen indirectly got at least three killed, but neither was charged with treason because the US was not at war with the Soviet Union/Russian Federation at the time of their actions.

By contrast, successful aid-and-comfort prosecutions include those of American Nazi propagandist Robert Henry Best and of Iva Toguri, who was accused of being “Tokyo Rose,” an English-language Japanese propaganda broadcaster meant to lower American service members’ morale in the Pacific (she was later exonerated and received a presidential pardon).

The second type of treason involves “levying war,” in which the defendants themselves waged war against the United States or an individual state. Aaron Burr, Thomas Jefferson’s first vice president, was prosecuted for treason on these grounds and acquitted, after being accused of assembling forces to create an independent state in the center of North America. John Brown, the abolitionist revolutionary, was convicted of treason against the state of Virginia on levying war grounds after his raid on Harpers Ferry.

Now, the op-ed author is obviously not going to be prosecuted for levying war. That leaves the claim that he or she provided aid and comfort to our enemies by undermining Trump in print.

For that to be the case, though, one would have to determine that the op-ed was designed to aid a specific foreign enemy with whom the US is at war, and there is no such country in the world right now.

Attempting to help al-Qaeda or any associated violent extremist groups might qualify under the Authorization for the Use of Military Force (AUMF) passed after 9/11, and indeed, an American-born al-Qaeda operative was indicted for treason in 2006 for aiding the organization. The indictment cites the AUMF as well as Osama bin Laden’s statements that al-Qaeda is at war with the United States to demonstrate that by adhering to al-Qaeda, the operative in question, Adam Yahiye Gadahn, was helping a group with which the US was at war.

But the op-ed author rather obviously did not write the New York Times piece with the express purpose of aiding al-Qaeda. Even if he did want to help al-Qaeda (a claim that, again, is preposterous), the treason allegation would be iffy. Consider the Supreme Court case of Cramer v. United States, in which Anthony Cramer, an American man who met with Nazi agents in the US, saw his treason conviction overturned on the grounds that merely meeting the enemy isn’t enough to count as treason.

In his opinion in that case, Justice Robert Jackson asserted that only a defendant who can be found to have “adhered to the enemy” and “intended to betray” the US could be found guilty of treason — even if he did provide aid and comfort to the enemy.

Proving that the op-ed author not only provided aid and comfort to al-Qaeda by the mere act of writing the op-ed, but also consciously intended to betray the United States of America, would be basically impossible. That holds even in the incredibly unlikely world where those were the intentions of, say, United Nations Ambassador Nikki Haley or White House chief economist Kevin Hassett or Russia Ambassador John Huntsman or any of the many other officials floated as being the op-ed author.

Treason is a very limited crime. It’s rarely prosecuted outside of wartime; Gadahn was the first person charged with treason since World War II. And it definitely doesn’t apply to this case.

Wuhan coronavirus outbreak: News and updates
Theresa May lost the Brexit deal vote. Now she has to fight to keep her job.
6 feet away isn’t enough. Covid-19 risk involves other dimensions, too.
A deceptively edited video of Joe Biden illustrates a big problem in 2020
Joe Biden and the Green New Deal
A top UN court just told the US to lift some sanctions on Iran