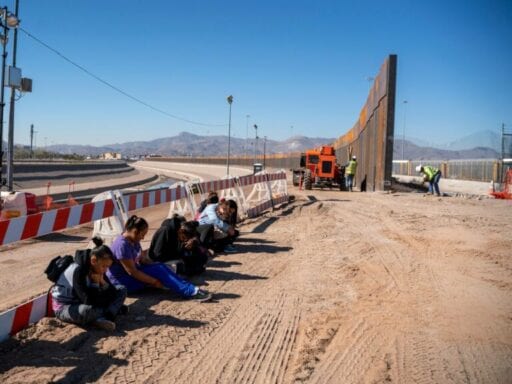 Share
Loading...
Salvadoran migrants wait for a transport to arrive after turning themselves into US Border Patrol by border fence under construction in El Paso, Texas on March 19, 2019. | Paul Ratje/AFP/Getty Images

Even West Point and schools for kids are impacted.

A National Guard readiness center in Puerto Rico. A hazardous material storage building on a US military base in Germany. A training facility for special operations forces working to deter Russia in Europe. Upgrades at the US Military Academy in West Point, New York.

Those are just some of the 127 affected military construction projects that will be defunded and delayed so President Donald Trump can build roughly 175 miles of wall on the southern border. In total, construction efforts in nearly half of all 50 states — as well as 19 countries, three US territories, and some classified locations — will have their funding diverted to pay for the barrier.

The Trump administration announced last February it would find $3.6 billion from previously approved military construction projects to fund the wall effort. But it wasn’t until Defense Secretary Mark Esper’s letter outlining the funding diversions was released to the public on Wednesday evening that the full scope of the financial diversion became clear.

In Esper’s telling, the move will help the military better provide support to the Department of Homeland Security’s (DHS) efforts to patrol the border.

“These projects will deter illegal entry, increase the vanishing time of those illegally crossing the border, and channel migrants to ports of entry,” he wrote in a letter to Pentagon colleagues dated September 3. “In short, these barriers will allow [the Pentagon] to provide support to DHS more efficiently and effectively. In this respect, the contemplated construction projects are force multipliers.”

But many lawmakers, mainly Democrats, don’t see such a rosy picture, arguing that the move erodes Congress’ authority to approve spending and could hurt the military’s ability to fight current and future wars. But many are also likely angry because military projects that would’ve brought jobs to their states or districts will be paused for now.

Virginia, for example, has four military projects that will be impacted, to the tune of just over $77 million — which helps explain why Sen. Mark Warner (D-VA) has been publicly blasting the administration’s decision. “Taking money away from our military — including funding to support critical projects here in Virginia — will mean we are less equipped to tackle threats here at home and abroad,” he wrote in a Wednesday statement.

The growing fury means it’s possible Democrats in Congress might try to block the move — which means a bruising political fight could be around the corner.

“The battles will be more political than legal,” William Banks, an expert on national security law at Syracuse University, told me. “It’s possible for Congress to enact — over a veto — funding restrictions on this or new funds that the president wants or needs. There’s lots of horse trading to come.”

The funding “delay” is really more of a “cancellation” in practice

The Pentagon keeps saying these projects are either delayed or deferred, but the reality is that Congress must again approve them before they can move forward. That means it’s more accurate to say these efforts are canceled until they’re reapproved again.

You can read Esper’s letter, which includes the full list of affected military projects, below.

But there are two categories of projects that stand out: The first is roughly $400 million in Puerto Rico projects — many of which are meant to help with the recovery effort after Hurricane Maria. The second is about $770 million in funding for military initiatives in Europe specifically intended to help deter possible Russian aggression.

It’s therefore fair to say that Trump is trading bolstering Puerto Rico and Europe’s security for fewer than 200 miles of border wall. For Trump, a self-described great dealmaker, that trade-off is apparently worth it.

You can read Esper’s letter for the full list of canceled projects.