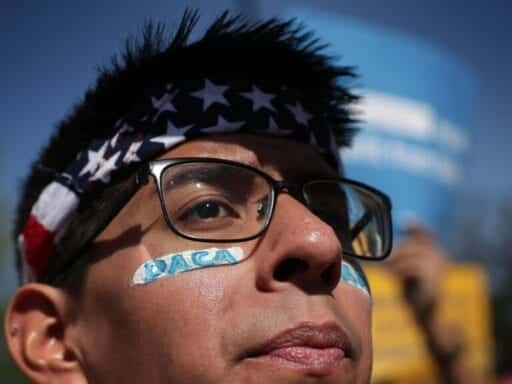 A conservative judge in Texas refuses to issue an injunction, so unauthorized immigrants currently protected from deportation will still be allowed to renew.

A federal judge in Texas has ruled that the Deferred Action for Childhood Arrivals (DACA) program — which President Trump sought to shut down in September 2017 but which has been partially reanimated by judges elsewhere — is probably illegal.

But Judge Andrew Hanen is refusing to order the program shut down immediately.

That’s a setback for the Trump administration, which has refused to defend DACA against the group of red states led by Texas suing over it (leaving its defense to advocacy groups), and which was hoping to use Hanen as a weapon against rulings in favor of DACA in New York, California, and Texas.

In the absence of a stop from Hanen, the Trump administration will have to continue accepting and processing two-year renewals of protection from deportation and work permits for the 690,000 unauthorized immigrants who came to the US as children already covered by DACA.

Hanen decided that the group of red states suing the Trump administration to end DACA waited too long to challenge the legality of the program. “The States could have brought a lawsuit against the entire program in 2012 or anytime thereafter,” he noted. But by now, because DACA has been protecting immigrants for six years, Texas can’t claim it would suffer irreparable harm if the program were allowed to continue for several more months.

The ruling doesn’t mean DACA is safe. The program has already been closed to new applicants, and it’s expected that the Supreme Court, with an eventual five-conservative majority, will rule that the Trump administration had the legal authority to wind down the program in 2017.

But the question of how long DACA renewals will be available is a crucial one for the immigrants currently protected by the program and trying to figure out how to stay protected for as long as possible. Friday’s ruling means they could be safe through June 2019.

Hanen’s refusal to grant a preliminary injunction against DACA is extremely surprising. The group of red states, led by Texas, who sued the Trump administration to end the program (after federal judges in California, New York, and DC ordered them to keep processing renewal applications) deliberately filed their case in Hanen’s court because of his record on immigration issues.

Most notably, Hanen had all but declared DACA unconstitutional while ruling against the Obama administration’s efforts to expand DACA in 2014 (as well as against a larger program to grant deportation protection and work permits to parents of US citizens).

In that case, Hanen issued a preliminary injunction against the Obama administration — preventing it from implementing an expansion of DACA while he considered the case in full — mere days before it was set to start. He was expected to issue a similar ruling in this case, ordering the government to stop processing renewals preliminarily while hearing the case more fully.

The Court used two time-worn sayings […] when it ruled that an injunction was warranted to stop the implementation of DAPA and Expanded DACA: “One cannot put the toothpaste back in the tube” and “One cannot scramble the egg.” Here, the egg has been scrambled. To try to put it back in the shell with only a preliminary injunction record, and perhaps at great risk to many, does not make sense nor serve the best interests of this country.

If Hanen had issued an order to stop DACA, the Trump administration would have faced mutually contradictory judicial injunctions — pitting the Texas one against the California, New York, and DC ones — creating a legal paradox that the Supreme Court would have had to resolve over its summer recess, and raising huge questions about what the Trump administration would do with DACA renewal applications in the meantime.

But the paradox didn’t emerge, because Hanen isn’t issuing an injunction to counter the others.

The paradox could still happen. Hanen gave the federal government 21 days to appeal the lack of an injunction to the Fifth Circuit, which is a pretty conservative circuit court — and it’s possible they’d be willing to overlook the timeliness issue. But it’s not likely that they’d go further than Hanen would.

Without that legal paradox, the Trump administration will have to wait for one of the four DACA-related lawsuits to make it to a circuit court ruling and then appeal to the Supreme Court. At this point, it’s unlikely the Court would hear the case until spring of 2019 — making a ruling in late June of 2019 most likely.

A nine-month lease on life for DACA might not sound like much. But because DACA is valid for two years after a renewal, it could make a big difference for hundreds of thousands of DACA recipients, who are trying to stay protected for as long as possible.

Watchmen dives into the past in an episode unlike any other in TV history
Mobile, Alabama, high school football game shooting: what we know
Stormy Daniels was arrested while performing at a strip club. Lawyer Michael Avenatti thinks it was ...
Beautiful Boy
Democrats have finally struck a deal with the White House on a coronavirus package
Mask mandates are crucial for fighting Covid-19. How should they be enforced?