Trump just refused any cooperation with the House impeachment inquiry 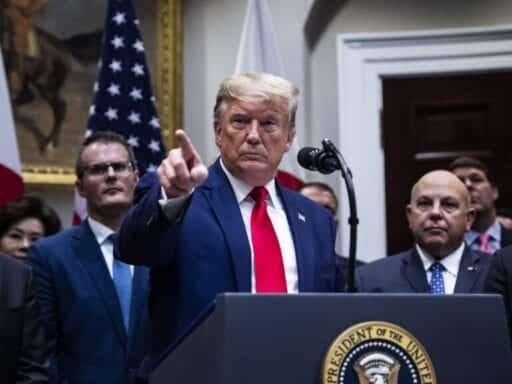 The Trump White House announced it would not cooperate in any way with House Democrats’ impeachment inquiry Tuesday night — a remarkably broad blanket refusal that will set up high-stakes legal battles.

“President Trump and his Administration cannot participate in your partisan and unconstitutional inquiry under these circumstances,” White House counsel Pat Cipollone wrote in a blustery letter to top House Democrats. The letter also claims the impeachment inquiry is an attempt “to overturn the democratic process.”

Gregg Nunziata, a lawyer and former staffer for Sen. Marco Rubio (R), tweeted that the letter was “bananas” and “a middle finger to Congress and its oversight responsibilities.”

Practically, this is an instruction from the White House to the whole executive branch that officials shouldn’t turn over documents, and that they shouldn’t make government employees available for testimony, in response to House requests or subpoenas in the impeachment probe into President Donald Trump’s conduct with Ukraine.

It’s an attempt to prevent Democrats from strengthening their case with new information — which makes it, in Democrats’ view, an attempt to obstruct their impeachment probe. Though it’s not particularly surprising, given the Trump administration’s truculent approach to other congressional oversight investigations, it’s a particularly bold statement, and one that raises questions about the constitutional division of powers.

The impact of this defiant approach was felt earlier Tuesday, when Ambassador Gordon Sondland said he would not show up for scheduled closed-door testimony to House committees. Sondland was deeply involved in Trump’s efforts to get the Ukrainian government to launch investigations into his political rivals. He claimed he was all set to testify, until the State Department ordered him not to do so.

Democrats responded by subpoenaing Sondland later Tuesday, for both documents and testimony. (His previously scheduled appearance was to be a voluntary one.) They set deadlines next week for Sondland to reply, and if he refuses, Democrats’ next step may be to ask the courts to step in to force him to comply.

It’s unclear how closely this pattern will repeat itself with subsequent witnesses. Sondland is a close Trump ally predisposed to abide by the president’s wishes, but other government employees may well prefer to show up and testify anyway — even if it means risking their jobs. (The whistleblower that kicked off this whole saga, for one, is in discussions about testifying.)

A challenge to congressional oversight powers

What is clear is that the letter is a challenge to the very concept of congressional oversight of the executive branch. Cipollone has little substantive justification for Trump’s refusal to comply with the House’s requests, other than complaining that he doesn’t like the way the impeachment inquiry has been conducted so far.

For instance, Cipollone makes process complaints, pointing out that the House has not held an official vote to start an impeachment inquiry, that some proceedings have been held in secret, that transcripts of depositions haven’t been released, and that Trump wasn’t given the right to cross-examine witnesses. All this, he declares, makes the impeachment inquiry “unconstitutional.”

But this makes little sense, since the US Constitution gives the House of Representatives “sole power of impeachment.” Effectively, the House has free rein to run an impeachment process the way it wants.

More broadly, the letter is a challenge to the very concept of congressional oversight.

The executive branch often pushes back against congressional requests for documents or testimony, but it usually happens on a case-by-case basis, and often deals are reached after some give-and-take. This, however, is a much bolder refusal to cooperate with any impeachment-related request for documents and testimony. And, in one way or another, it will likely end up in the courts.

Supreme Court rules: Trump's travel ban, anti-abortion centers
Why Pete Buttigieg is suddenly surging in the polls
Trump’s denial of his coronavirus failings will be “one of the biggest propaganda battles in America...
What it’s like working at the polls in the middle of a pandemic
#KamalaHarrisDestroyed debate shows how little we understand social media manipulation
Buttigieg MSNBC town hall: “I would not have applied that amount of pressure” on Franken to resign