Trump makes his trade war pitch: “Tariffs are the greatest!” 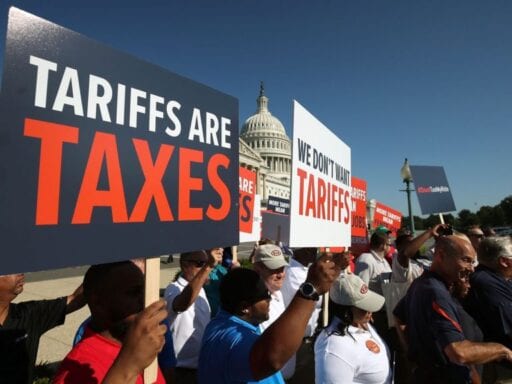 President Donald Trump is taking his trade war pitch to the people. His message: “Tariffs are the greatest!”

Except they’re not — and even his chief economic adviser has said so.

In a tweet early Tuesday morning, the president sought to reassure Americans that the tariffs he’s imposed on China, Canada, Mexico, the European Union, and Japan are a good idea. His administration has targeted steel and aluminum imports from many American allies, put tariffs on $34 billion of Chinese goods, and is looking to escalate by potentially increasing China tariffs and imposing a tax on imported cars and parts. Many lawmakers on both sides of the aisle, policy experts, and business groups are urging Trump to put on the brakes, but he appears to be moving full speed ahead.

“Tariffs are the greatest,” he tweeted on Tuesday. “Either a country which has treated the United States unfairly on Trade negotiates a fair deal, or it gets hit with Tariffs. It’s a simple as that — and everybody’s talking!”

He reassured Americans that “all will be Great,” despite the growing concerns about his tactics.

Tariffs are the greatest! Either a country which has treated the United States unfairly on Trade negotiates a fair deal, or it gets hit with Tariffs. It’s as simple as that – and everybody’s talking! Remember, we are the “piggy bank” that’s being robbed. All will be Great!

Speaking to CNBC on Friday, Trump appeared similarly emboldened and brushed aside concerns about the consequences of his trade tactics. He suggested that now is the time to launch trade aggressions because the stock market is up. “You know the expression, ‘We’re playing with the bank’s money,’ right?”

Tariffs are taxes imposed on imported goods and services. They’re meant to raise revenue or protect domestic industries from foreign competition, but they often result in higher prices for businesses that rely on the imported goods — say, manufacturers that use steel and aluminum imports in their supply chain — and, ultimately, for consumers when companies pass on the extra prices to them. Trump is enacting tariffs in an effort to extract demands from foreign countries, though in most cases, experts say it’s not clear what he wants.

There is a chorus of voices warning against the potential consequences of a trade war, including National Economic Council Director Larry Kudlow — at least before he worked for Trump. In a March op-ed, Kudlow warned Trump that tariffs are likely to backfire and argued that they’re really tax hikes. Referring specifically to the steel and aluminum tariffs, Kudlow wrote, “Since so many of the things American consumers buy today are made of steel or aluminum, a 25 percent tariff will likely get passed on to consumers at the cash register. This is a regressive tax on low-income families.”

.@POTUS this morning: “Tariffs are the greatest!”

Thus far, the effects of Trump’s trade war have been limited. Specific companies have seen consequences — for example, Harley-Davidson and Mid-Continent Nail — as have industries such as agriculture and home appliances.

There have also been warnings that Trump’s tariffs could wipe out any positive effects of the tax cuts the GOP passed in 2017. The conservative-leaning Tax Foundation estimates that Trump’s enacted and proposed tariffs completely reverse the tax bill’s positive effects on the labor force. It estimates the tariffs enacted so far will reduce wages by 0.04 percent and eliminate more than 48,000 jobs. If the White House enacts every tariff it’s threatened, it would reduce wages by 0.26 percent and slash 277,000 jobs.

In other words, tariffs aren’t as “great” as Trump wants everyone to think. And just because the stock market is up (it’s gained significantly since Trump’s inauguration but is actually relatively flat this year) and the economy is good doesn’t mean Trump has “play money” to work with.

Mark Zandi, the chief economist with Moody’s Analytics, in an email weighed in on Trump’s assertion that things are so good right now that it’s time to get aggressive on trade. The president’s view is “deeply vexed,” Zandi said. “The economy is strong, but only because it is being temporarily juiced up by deficit-financed tax cuts and increases in government spending. He is borrowing money to pay for the trade war. Ironically, he is borrowing the money in part from the very countries he is fighting with (e.g., China, Japan, Canada, Europe).”

The United States’ trading partners don’t appear to be backing down; instead, they’ve hit the US with retaliatory tariffs. The rhetoric isn’t cooling down either, with Trump declaring Europe one of America’s biggest “foes” just this month.

The trade war “will almost certainly diminish the US position as the center of the global economy and financial system,” Zandi said. “Trump’s trade war may become his Vietnam if he doesn’t rethink things soon.”

A faint, beautiful interstellar comet is whizzing by the Earth
YouTube has a pedophilia problem, and its advertisers are jumping ship
A black police organization issued a powerful defense of Colin Kaepernick
Trump thanks the “great people” in a video featuring a supporter yelling “white power”
Supreme Court justices fear “chaos” if members of the Electoral College can defy the popular vote
Vox Sentences: Right to marry, right to work?