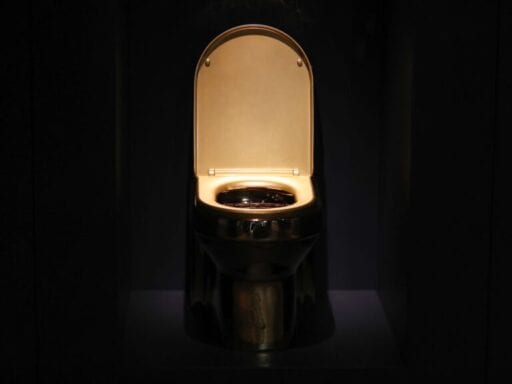 During a small business event at the White House Friday, Trump announced he has ordered a federal review of water efficiency standards pertaining to bathroom fixtures.

“People are flushing toilets 10 times, 15 times as opposed to once. They end up using more water,” Trump said, complaining that water flow in other fixtures has slowed to a trickle. “You can’t wash your hands practically, there’s so little water comes out of the faucet, and the end result is you leave the faucet on and it takes you much longer to wash your hands, you end up using the same amount of water.”

Although Trump said during the event that the “EPA is looking at [water flow] very strongly, at my suggestion,” this review is actually mandated under 2018 legislation that directs the Environmental Protection Agency to investigate water regulations adopted before 2012.

These include the agency’s WaterSense program, which was first launched in 2006 in order to reduce the water use of fixtures like toilets. The requirement that toilets use a set amount of water began on the federal level in 1992, according to the Associated Press, when President George H.W. Bush signed the Energy Policy Act, a law mandating any toilets installed in homes after 1994 use 1.6 gallons of water or less per flush.

The WaterSense framework takes that law a step further, and is an optional standard that aims to promote “awareness about the importance of water efficiency,” according to the EPA. WaterSense certified toilets, for instance, use only 1.28 gallons per flush, or 20 percent less water than the standard created by the Energy Policy Act.

Other fixtures and appliances can be WaterSense certified as well — for instance, faucets with flow rates of 1.5 gallons per minute (using at least 32 percent less water than standard) meet the criteria.

The Energy Policy Act and the WaterSense certification exist to try to curb water waste; toilets in particular have been viewed as a prime opportunity to do so by experts. According to the EPA, toilets consume the most water of any plumbing fixture in a typical American home, using about 30 percent of a household’s water each month.

The agency also argues that replacing old toilets (commodes manufactured before 1980 typically use five gallons of water for each flush) can help save money: Replacing older toilets with WaterSense fixtures could “save more than $110 per year in water costs, and $2,200 over the lifetime of the toilets,” according to an EPA fact sheet.

Trump did not mention any of this Friday; it also is not clear just who — if anyone — is actually complaining about the need to flush toilets multiple times to eliminate waste. But his claims represent yet another example of the president’s advocacy for rolling back federal measures meant to protect the environment.

Trump’s continuing attacks on the environment

A potential rollback of water regulations would fit the administration’s continued efforts at deregulating the EPA. The New York Times has identified 53 separate rules that have completed the rollback process at the agency, and 32 more that are still in the works. The president has been a vocal skeptic of climate change since the earliest days of his candidacy for president, but nonetheless campaigned to “to promote clean air and water,” in 2016.

He has continued campaigning on that point, and has told audiences thanks to his policies, “We have among the cleanest and sharpest — crystal clean, you’ve heard me say, I want crystal clean — air and water anywhere on Earth.”

The quality of air and water in the US is mixed, with lead contamination and air pollution of increasing concern to scientists. Trump, however, has done little to address these issues, and began unraveling the environmental protections put in place by his predecessors almost immediately broken after assuming office, as Vox’s Matthew Yglesias has explained:

Most of these rollbacks’ impacts will be felt primarily in the long term, but already, particulate pollution is getting worse, reversing years of progress. A team of researchers at Carnegie Mellon estimates that 9,700 more Americans died due to air pollution in 2018 than in 2016, in part due to regulatory changes. But the Trump administration is moving to restrict the range of evidence used to demonstrate air pollution’s harms, hoping to forestall the promulgation of new standards that would lead to stricter regulation.

Trump’s goal of boosting America’s natural resource extraction industries has been largely successful. There is no broad-based revival of the coal industry, but employment in coal mining has stabilized and is rising slightly in a reversal of recent trends. American oil output has soared to the point where net imports of crude oil and petroleum products are at their lowest level in generations and the country is likely to become a net exporter in the near future. Natural gas output, meanwhile, has soared to record highs, continuing a rapid growth pattern that began during the Obama presidency.

Trump’s policy of prioritizing natural resource extraction over environmental regulation has resulted in a growth in greenhouse gas emissions, with a report from the research firm Rhodium Group finding US carbon emissions rose 3.4 percent in 2018.

Countries around the world were told to lower emissions by almost that exact amount — 3.3 percent per year — starting in 2010 by the UN in order to keep global warming at just 1.5 degrees Celsius. (It is now, of course, too late for that, and global emissions must fall by 7.6 percent a year to reach that 1.5 degrees Celsius target.)

With that global temperature rise, water availability and quality is expected to shift; experts expect that water preservation will only become more urgent as time goes on, making the matter of how Americans flush their toilets more pressing that in may seem.

7 authors tell us how 20 years of Harry Potter shaped their lives
US officials say their pressure on Iran is working — and that’s why tensions are getting worse
New Hampshire primary 2020
How a clunky, retro hair dryer suddenly went viral
An easy way to make piglet lives better
House Republicans are ditching their plan to force Democrats to vote to abolish ICE