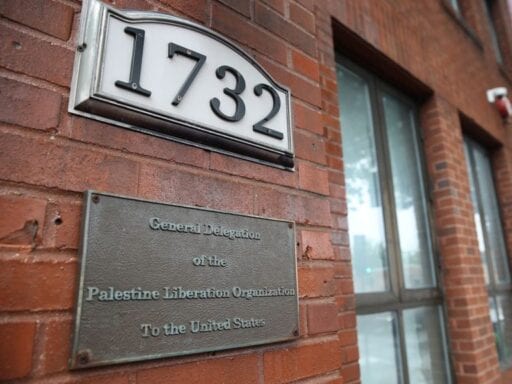 It’s the Trump administration’s latest attempt to pressure Palestinians to participate in a US-sponsored peace plan.

The Trump administration is closing the Washington offices of the Palestine Liberation Organization (PLO) to try to pressure the Palestinians to come to the negotiating table ahead of a US-sponsored Middle East peace plan.

The decision to close the office is the latest step in a pressure campaign being waged by the Trump administration against Palestinian leadership to get them to comply with a planned Middle East peace proposal, which has yet to be unveiled.

The PLO is an official body that represents the Palestinian people. As Vox’s Zack Beauchamp writes, the PLO runs the Palestinian National Authority (PA), the semiautonomous government tasked with managing the Palestinian territories. (Fatah, the secular nationalist political party that’s dominated Palestinian politics for decades, controls the PLO and PA.)

Even though the US does not recognize Palestine as a state, the PLO has maintained a diplomatic mission in Washington, DC, since the mid-1990s.

But in a statement Monday morning, the State Department blamed the decision to close the office on the Palestinian leadership’s unwillingness to participate in a yet-to-be-released Middle East peace plan, and their failure to “advance the start of direct and meaningful negotiations with Israel.” It also linked the decision to Palestinian attempts to “prompt an investigation of Israel by the International Criminal Court.”

National Security Adviser John Bolton also reiterated that the Trump administration would be closing the PLO offices in a speech to the Federalist Society in Washington, DC, on Monday, remarking that “the United States will always stand with our friend and ally, Israel.”

Palestinian leadership, for their part, reacted with frustration.

Hanan Ashrawi, a senior PLO official, told the Guardian that the US government’s decision was “extremely cruel and spiteful to persist in deliberately bashing the Palestinian people by denying them of their rights, giving away their lands and rightful capital of Jerusalem,” and added that it was a form of “crude and vicious blackmail.”

A PLO spokesperson in Ramallah said that the decision was “a declaration of war on efforts to bring peace to our country and the region.” And in a statement, the top Palestinian negotiator, Saeb Erekat, said it was another example of the Trump administration’s policy of collective punishment against the Palestinian people.

The Trump administration’s goal may be to convince the Palestinians to get on board with its peace plan, but it seems to be having the opposite effect. “All of this is making sure the U.S. will never ever play the role of the peacemaker,” Husam Zomlot, the Palestinian representative to Washington, told the Wall Street Journal.

Trump’s latest attempt to put pressure on Palestinians may backfire

Since Trump took office, he hasn’t hesitated to delve into the Palestinian Israeli conflict, and has shirked established US policy.

In December 2017, Trump declared that he planned to move the US Embassy in Israel from Tel Aviv to Jerusalem, effectively recognizing that city as the capital of Israel and breaking with decades of established US policy.

The UN and the international community reacted with outrage to the announcement, and Palestinians said that this effectively killed any attempt at a US-brokered peace process. Palestinian Authority President Mahmoud Abbas went further, saying that Palestinians would not cooperate with proposed peace talks after the embassy decision was announced.

Trump, for his part, tweeted in January that the US was giving tons of aid to Palestinians and getting nothing in return. And on August 24, the Trump administration announced that it would “divert” $200 million in aid to Palestinians living in Gaza and the West Bank, at least some of which would have been dispersed through the Palestinian Authority.

A week later, the administration also announced that it was planning to cut all US funding to UNRWA, the United Nations program that administers aid to millions of Palestinian refugees. The US is the largest single donor to the UN agency, responsible for providing about $350 million each year — a quarter of its annual budget.

The cuts, and this latest move to shutter the PLO’s offices in Washington, are apparently intended to pressure Palestinians to comply with aspects of a Middle East peace proposal that the Trump administration has been working on for several months. Few details have been leaked to the press, and it’s unclear when the plan will be made public.

Israeli leadership has yet to publicly comment on the move, which took place during the Jewish New Year. But the leftist Jewish American group J Street issued a statement condemning the decision, saying that the Trump administration was “kicking the legs out from under any possible negotiating table,” according to Haaretz.

Trump’s son-in-law and senior adviser Jared Kushner, who is also a special envoy to the Middle East, has been working on the new plan, which is intended to be a long-term resolution to the Israeli-Palestinian conflict.

But based on the few details that have leaked out, experts say that it’s unlikely to be successful, and it’s unclear how the US and Israel would proceed without Palestinian participation.

In June, Erekat told NBC News that Kushner’s peace plan, which reportedly refuses to recognize Palestinian rights or a Palestinian state, was doomed to fail. “Kushner represents a policy of dictation rather than negotiations,” he said. “It is the Trump Administration that has walked away from the negotiations, from international law and U.N. resolutions.”

A wave of evictions is coming. Democrats are proposing a lifeline.
The killing of Ahmaud Arbery, an unarmed black jogger in Georgia, explained
Survey: 80 percent of Americans said they saw fake coronavirus news in the early days of the pandemi...
A California city gave some residents $500 a month, no strings attached. Here’s how they spent it.
Trump just debuted his 3 main defenses against the Ukraine scandal
How to answer 7 big questions kids have about the coronavirus pandemic