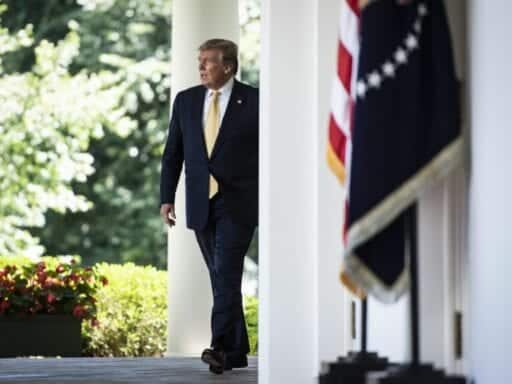 Trump said, “I watched Richard Nixon go around firing everybody, and that didn’t work out too well.”

President Donald Trump said this week that while he had the legal power to fire former special counsel Robert Mueller, he chose not to do so because it “didn’t work out too well” for President Richard Nixon when he fired government officials during the Watergate scandal.

He also claimed that Mueller’s investigation was born of a “set up” that President Barack Obama “must have known about.”

The president made these claims in an interview with ABC News’s George Stephanopoulos that was released Sunday.

Trump’s statements, which were unsupported by evidence and which distorted the findings of the Mueller report, represent the latest instance of the president working to discredit Mueller’s findings. Since the release of the Mueller report, Trump has worked to protect himself from allegations of wrongdoing as Democrats debate whether to proceed with impeachment proceedings against him based on the potential counts of obstruction of justice outlined in the special counsel’s report.

The Mueller report found that the president tried to have former White House counsel Don McGahn fire the special counsel, but McGahn refused. In the interview, Trump pushed back against this finding, and said that his critics don’t realize that he exercised restraint in allowing the Mueller probe to continue.

“Article II [of the Constitution] allows me to do whatever I want, Article II would’ve allowed me to fire [Mueller],” Trump said. “But I wasn’t going to fire him. You know why? Because I watched Richard Nixon go around firing everybody, and that didn’t work out too well.”

Trump was referring to Nixon’s “Saturday night massacre.” On October 20, 1973, Nixon ordered the Justice Department to fire special prosecutor Archibald Cox (the two highest-ranking officials at the department resigned in protest; the third-ranking official ultimately agreed to carry it out) which only intensified public outrage over the Watergate scandal.

Article II of the Constitution outlines the president’s powers and duties; these include: making treaties (with the help of the Senate), commanding the Army and Navy, and delivering the State of the Union address. Vox’s Julia Azari describes the article as one that “barely says anything” and writes it is a piece of the Constitution that has inspired a lot of legal debate. It is clear that Article II does not allow presidents to do whatever they want; however, it is not completely clear whether it would have allowed Trump to fire Mueller.

EXCLUSIVE: President Trump tells @GStephanopoulos that he “wasn’t gonna fire” special counsel Robert Mueller because “I watched Richard Nixon go around firing everybody, and that didn’t work out too well.” https://t.co/J72Biz1YSs pic.twitter.com/glA1e6L57y

Attorney General William Barr and other Trump administration officials — including the president himself — have called for an investigation into the origins of the Mueller report. Trump has tweeted he wants to “investigate the investigators” and Barr has said he wants to “explore” what he characterized as “spying on a political campaign” during a Congressional hearing.

The root of Trump’s concerns is that members of his campaign staff, including former adviser Carter Page, were under FBI investigation. Trump told Stephanopoulos this work by the FBI (even though Page was put under surveillance after he left the Trump campaign) demonstrated that there was a conspiracy at the FBI to prevent his election.

When Stephanopoulos asked Trump if he thought Obama was behind a conspiracy at the FBI, Trump said his predecessor at very least had knowledge of this “set up.”

“I would say that he certainly must have known about it because it went very high up in the chain, but you’re gonna find that out,” Trump said. “I’m not gonna make that statement quite yet, but I would say that President Obama had to know about it.”

.@GStephanopoulos: “You clearly believe that there was a group of people working against you. Do you think Pres. Obama was behind it?”

Pres. Trump: “I would say that he certainly must have known about it … I’m not gonna make that statement quite yet” https://t.co/J72Biz1YSs pic.twitter.com/xANi3MPLb7

Throughout the interview, Trump repeatedly claimed that the Mueller report cleared him of any wrongdoing. As Stephanopoulos tried to explain to the president, this is not the case; the Mueller report specifically says: “If we had confidence after a thorough investigation of the facts that the President clearly did not commit obstruction of justice, we would so state.” The Mueller report does not so state.

At one point, Stephanopoulos also pointed out that the Mueller report does not say that there was “no collusion” with Russia. Trump denies this vigorously, and when pressed on the issue, abruptly ends the conversation with Stephanopoulos by getting out of the car.

EXCLUSIVE: In an interview with @GStephanopoulos, President Trump kept bringing up the Mueller report.

Asked why it bothers him so much, Trump says, “because it’s untrue. I like the truth. I’m actually a very honest guy” https://t.co/WxSentMbCv pic.twitter.com/7Pj1RSuNyC

When asked why the Mueller report bothers him so much, Trump said it’s “because it’s untrue.”

“I like the truth. I’m actually a very honest guy,” Trump said.

Trump’s claim that he could have fired Mueller under Article II of the Constitution is debatable. It’s a very vague and sparse section of the Constitution, and the scope of executive power under it is a topic of constant discussion among legal scholars. Some experts believed Trump would’ve had to have ordered a Justice Department official to fire the special counsel, while others believe the president had the power to carry out a firing himself.

Trump’s claims about the Mueller report’s findings were also misleading. As Stephanopoulos tried to point out to the president, the report wasn’t seeking evidence of collusion — which is not a legal term — and in fact did find evidence of numerous links between the Trump campaign and Russia. The report also found at least 10 examples of potential obstruction of justice.

There is also no evidence that the FBI was involved in a conspiracy to prevent Trump’s election. While a couple of FBI agents did exchange politically-charged text messages suggesting that they didn’t want Trump to be elected, and while Carter Page and campaign aide George Papadopoulos were investigated for ties to Russia, there is no evidence of any campaign anyone in the FBI to sabotage Trump’s election. There is no evidence that Obama was privy to that text conversation critical of Trump, and although Obama tried to counteract Russia efforts to influence the 2016 election, nothing suggests the former president directed his Justice Department to sabotage the Trump campaign.