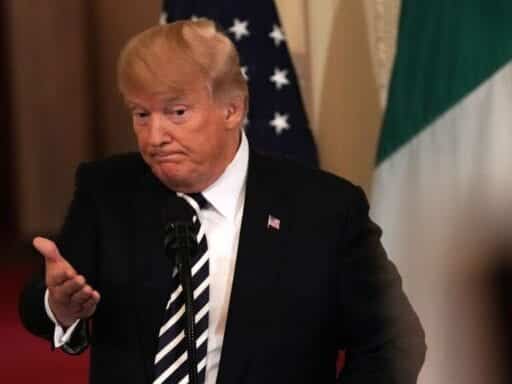 President Donald Trump left the door wide open to the possibility of meeting with Iranian President Hassan Rouhani — just one week after threatening the country with potential war.

During a press conference with Italian Prime Minister Giuseppe Conte on Monday, a reporter asked Trump if he would be open to meeting with Iran’s president. Trump responded that he’d sit down with any leader and talk.

“I’m ready to meet any time they want to,” he said, adding that he’d do so without preconditions. “Speaking to other people, especially when you’re talking about potentials of war and death and famine,” he continued, “you meet.”

That’s a startling turnaround, as Trump has consistently struck a hawkish tone when dealing with Iran.

“I’ll meet with anybody. I believe in meeting.”

President @realDonaldTrump says he is willing to meet with President Rouhani of Iran, saying he would meet “any time they want” and without preconditions pic.twitter.com/nafQsr2Uu5

The deal between Iran and the United States, Britain, France, Russia, China, Germany, and the European Union put tight restrictions on Tehran’s nuclear program in exchange for the relaxation of some punishing international sanctions on Iran. It was the Obama administration’s biggest foreign policy achievement.

It’s possible this isn’t the first time Trump has signaled his willingness to meet: Iran claimed that Trump tried to meet with Rouhani eight different times at the United Nations last year. The White House, though, called that assertion “false.”

Two big questions remain. First, will Rouhani accept Trump’s offer? Rouhani’s popularity has dropped in Iran, mostly because he has yet to deliver on his promise to vastly improve his country’s economy. Rouhani gained support for signing the nuclear deal by claiming Iran would soon see positive economic results.

The second question revolves around what kind of domestic backlash Trump will receive from conservatives after not declining an offer to meet with a leader in a brutal regime.

If recent history is any guide, he’s likely to receive enough support to push forward with a diplomatic opening.

Back in 2007, then-presidential candidate Barack Obama said he’d meet with Mahmoud Ahmadinejad, the Iranian president at the time. Obama argued that denying a meeting wouldn’t adequately punish the leaders of adversarial countries and would allow the American president to fight for US interests. Obama’s election website even called for “tough, direct presidential diplomacy with Iran without preconditions.”

Conservatives (and some Democrats) hammered Obama over it. The criticism of Obama’s relatively open stance toward Tehran continued throughout his presidency and reached a fever pitch during debates about whether to sign a nuclear deal with Iran.

Trump, however, will likely receive different treatment. In the past two months, the president has met with both North Korean leader Kim Jong Un and Russian President Vladimir Putin — the leaders of brutal regimes, just like Rouhani. (However, Rouhani is not the real leader in Iran; that’s Supreme Leader Ali Khamenei.)

Yet each time, Trump escaped widespread condemnation from conservatives for his willingness to do so. There’s no reason to expect that the reaction to this latest statement will be any different.

Some conservatives, however, are confused as to why this is the case.

“I’m not certain why meeting with Kim without preconditions is suddenly a grand coup when we would have gone nuts had Obama done the same,” conservative pundit Ben Shapiro said in March. Shapiro had criticized Obama back in 2009 and is now often critical of Trump.

This isn’t to say that Trump shouldn’t meet the Iranian president — it’s possible doing so would thaw the frosty relations between Washington and Tehran. But it does show that many of the foreign policy barriers placed in Obama’s way have suddenly disappeared for Trump.

How the White House became a coronavirus breeding ground
The charges against former Minnesota police officer Derek Chauvin, explained
Shopify hits President Trump where it hurts: His wallet
A reporter confronted Sarah Sanders about Trump’s habit of insulting black people on Twitter
The effanineffable, deep and inscrutable, singular Cats
The complicated relief of the Chauvin verdict