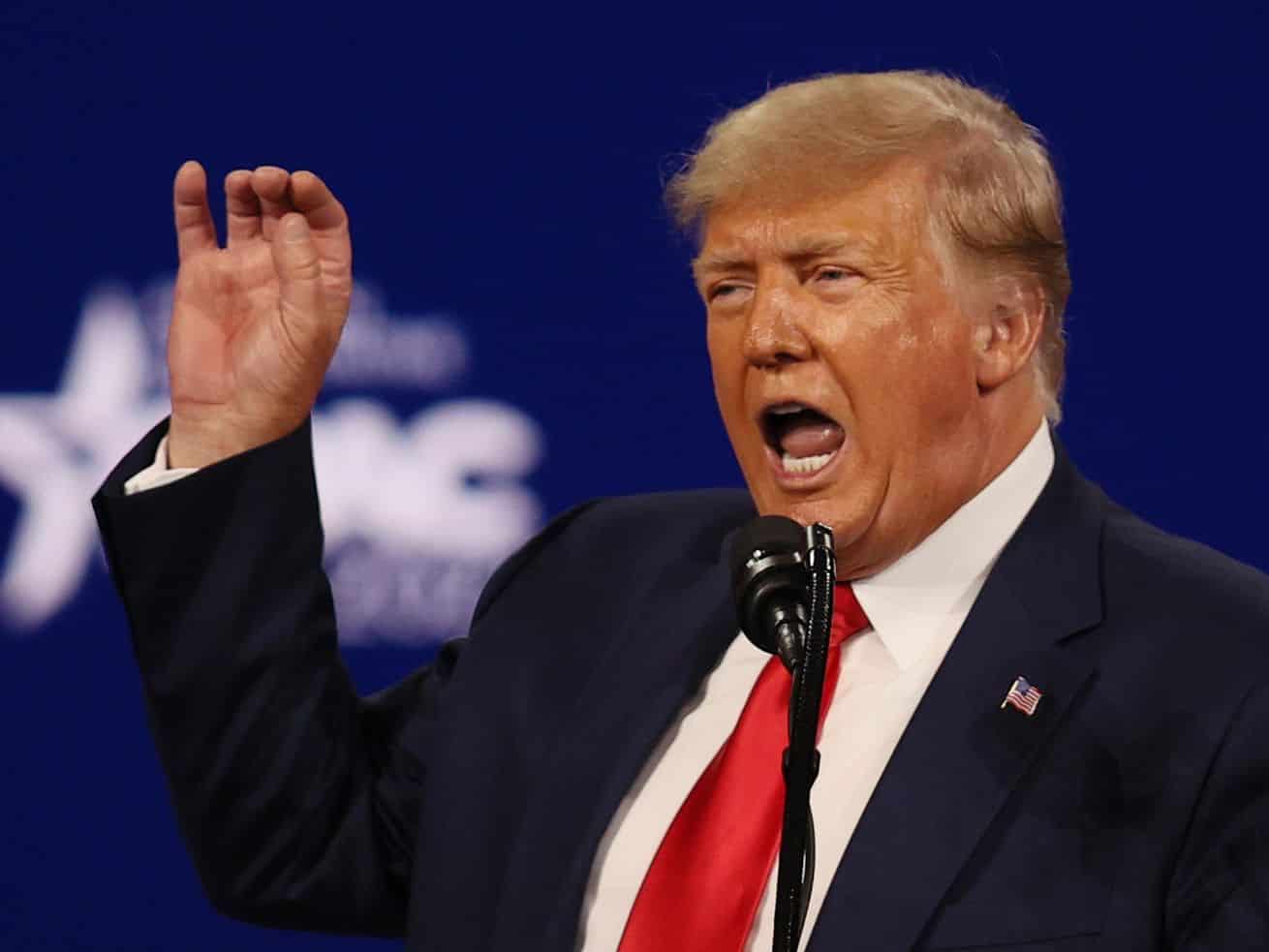 Trump sent cease and desist orders to the RNC, NRSC, and NRCC on Friday.

Former President Donald Trump demanded that the Republican National Committee (RNC) and two GOP campaign organizations stop using his name and likeness for fundraising, on Friday, according to a report from Politico.

The cease and desist effort comes less than a week after Trump’s first major post-presidency speech, at the 2021 Conservative Political Action Conference, or CPAC, in Orlando, Florida.

Trump used his keynote address there not just to reassert his leadership of the party that has twice nominated him for president, but to float a potential 2024 run for president, and to call out by name the 10 Republican representatives who voted to impeach him for inciting insurrection in January.

He also attacked the seven Republican senators who voted to convict him, telling the crowd, “Get rid of ’em all,” though at least two of the seven have already announced that they will not run for reelection.

According to Politico’s Rachael Bade and Tara Palmeri, those Republican defectors are part of the reason why Trump chose to issue cease and desist orders Friday. The twice-impeached former president was reportedly “furious that his name has been bandied about by organizations that help Republicans who voted to impeach him — without his permission.”

Before his pivot to politics, Trump made a career trading on his name: He’s licensed everything from Trump steaks to Trump vodka to Trump ties, not to mention a slew of towers in the US and abroad, and made millions in the process.

In February, NRCC finance chair Rep. Darin LaHood told Politico that the GOP’s campaign arm would stand behind pro-impeachment members in 2022, despite Trump’s public desire to excommunicate them from the party. And NRCC chair Rep. Tom Emmer has encouraged Trump to stay out of GOP primaries.

Trump’s CPAC speech made it clear that he does plan to intercede in primaries — and if enforced, the cease and desist orders Trump’s camp sent Friday could well be a blow to the GOP’s fundraising efforts heading into the midterms.

In part, this is because the Republican base remains overwhelmingly loyal to Trump. For example, in a Morning Consult/Politico poll in the field late last month, 79 percent of Republicans say they retain a favorable opinion of the former president, and the majority of House and Senate Republicans have cast in their lot with him as well.

Additionally, Trump has already proved himself to be a fundraising giant since his election defeat in November last year. His leadership PAC, Save America, raised more than $31 million just in the aftermath of the election, and Trump is reportedly also contemplating starting a new super PAC to boost his fundraising power.

Trump is also doing his best to channel money from Republican donors through his own fundraising channels, instead of groups like the NRSC.

“There’s only one way to contribute to our efforts to elect America-first Republican conservatives and in turn to make America great again, and that’s through Save America PAC and donaldjtrump.com,” he told supporters at CPAC last weekend.

Should Republican donors heed the former president’s call, Trump will likely be able to influence coming elections not just by using his popularity to provide endorsements, but by using his PACs to rival efforts by the RNC, NRSC, and NRCC.

As of Saturday, however, the RNC doesn’t appear to have been deterred. According to Politico’s Alex Isenstadt, the committee sent out a fundraising email invoking Trump’s agenda even after the cease and desist orders went out.

As reported by @playbookdc, Trump has sent cease-and-desist letters to the RNC, NRCC, and NRSC telling them not to use Trump’s name or likeness in $ appeals

But the RNC appears to be ignoring it. They sent out an email today asking supporters for $ to “DEFEND” Trump’s policies

All the money he’s raking in aside, Trump’s future political plans are somewhat unclear. He has repeatedly teased a 2024 run, and it’s not hard to see him winning the nomination again if his current support with the GOP base holds up.

But Trump is also facing a unique set of post-presidential challenges that could complicate that plan — namely, a whole bunch of potential legal problems.

There’s also a defamation suit by writer E. Jean Carroll, who accused Trump of sexual assault in 2019, and two lawsuits by members of Congress over Trump’s actions in connection with the January 6 storming of the US Capitol by pro-Trump insurgents.

What’s more, Trump is facing potentially precarious financial circumstances in the near future, with a more than $100 million IRS decision about a tax refund looming and his business in difficulty.

In short, he could be a bit busy with other things by the time 2024 rolls around — and that’s even assuming he wants to run, as he famously hates the actual work of being president and Twitter has made it clear he won’t have his account back to aid him, even if he runs again.

For now, however, Trump’s prospective 2024 candidacy has largely frozen out the rest of the field of Republican 2024 hopefuls, and allowed him to consolidate his leadership of the party, as Bloomberg explained last month.

And regardless of what he decides about 2024, Trump’s plans for 2022 are clearer. In February, he issued his first GOP primary endorsement against a pro-impeachment Republican — Ohio Rep. Anthony Gonzalez — and plans to target other intraparty opponents, such as Alaska Sen. Lisa Murkowski, the only senator who voted to convict who is also up for reelection in 2022.

“I do not know where other people will be next year,” Trump said in a statement Saturday, “But I know where I will be — in Alaska campaigning against a disloyal and very bad Senator.”

The massive anti-Brexit protest march in the UK, in 19 photos
Vox Sentences: Ajit Pai doesn’t want to play Monopoly this time
North Korea has unveiled new weapons, showing Trump failed to tame its nuclear program
State of the Union 2020: President Trump gives annual address to Congress
Aurora, Illinois, shooting: what we know
Trump is the obstacle to a shutdown deal