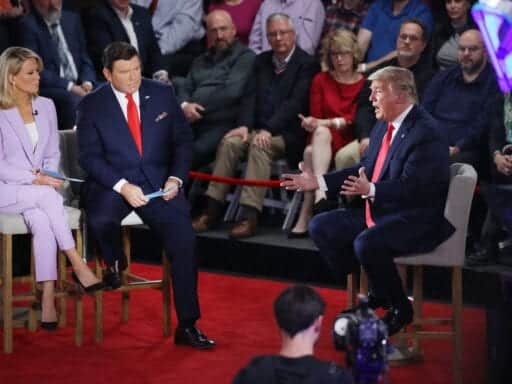 During his Fox News town hall on Thursday night, President Donald Trump said he planned to propose cuts to government benefit programs like Medicare and Social Security in his second term. The White House spent the hours that followed trying to walk those comments back.

Trump’s remarks came in the context of a discussion about the national debt, which has ballooned to historic levels under his presidency despite his 2016 campaign promise to eliminate it entirely. After Trump claimed that cutting the debt would be a focus of his second term, host Martha MacCallum pointed out that “if you don’t cut something in entitlements, you’ll never really deal with the debt.”

But before “you’ll never really deal with the debt” even escaped MacCallum’s lips, Trump interjected to agree with the first part of her statement — that cuts to programs like Social Security and Medicare will be necessary to get the debt under control.

“Oh, we’ll be cutting,” he said. “We’re also going to have growth like you’ve never seen before.”

Unsurprisingly, Trump’s comments generated a negative stir. While pushing for cuts to entitlement programs have been GOP orthodoxy for many years, the idea is deeply unpopular with the American public. Shortly after the town hall ended, White House officials (including Trump) got busy doing some damage control.

Press secretary Stephanie Grisham responded on Twitter to a story from the Daily Beast about how Democrats like Joe Biden were already messaging on Trump’s entitlement comments by calling the premise of the article “fake news.”

On Friday morning, Trump himself weighed in.

“I will protect your Social Security and Medicare, just as I have for the past 3 years. Sleepy Joe Biden will destroy both in very short order, and he won’t even know he’s doing it!” he tweeted.

I will protect your Social Security and Medicare, just as I have for the past 3 years. Sleepy Joe Biden will destroy both in very short order, and he won’t even know he’s doing it!

Around that same time, White House counselor Kellyanne Conway was on Fox News denying that Trump said what he said — even after hosts played her the video clip of his comments.

Here’s Kellyanne Conway on Fox News insisting that Trump didn’t actually say what he said last night about cutting entitlements (she does this even after Fox News plays the clip back!) pic.twitter.com/vwAFeFCwzR

Despite what White House officials would have you believe, the video of Trump’s “we’ll be cutting” comment makes clear he was talking about government benefit programs.

Trump started talking about his intention to make cuts before MacCallum even had a chance to say the word “debt.” And his use of the term “cutting” in the context of the national debt doesn’t make sense. Debt is something you reduce, not cut, and what Trump was trying to say is that budget cuts are one way he plans to address the national debt.

Regardless of how the White House spins in, the bottom line is that Trump wants to cut entitlements

The question about whether Trump intends to cut entitlements isn’t really up for debate — he’s already proposed cuts to Medicare, Medicaid, and Social Security disability programs.

The White House proposes to cut spending by $4.4 trillion over a decade. Of that, it targets $2 trillion in savings from mandatory spending programs, including $130 billion from changes to Medicare prescription-drug pricing, $292 billion from safety-net cuts—such as work requirements for Medicaid and food stamps—and $70 billion from tightening eligibility access to disability benefits.

These cuts might be popular among Tea Partiers, but they’re not popular with the general public. So for years now, Trump has played both sides by proposing cuts that don’t end up getting enacted because of Democratic opposition in Congress while continuing to insist that he’s not really proposing cuts.

For instance, during an interview that was conducted in Davos, Switzerland, in January, Trump told CNBC that entitlement cuts would be on the table “at some point.”

CNBC: Will entitlements ever be on your plate [for cutting]?

TRUMP: “At some point they will be”

CNBC: But you said you wouldn’t do that in the past

TRUMP: “We also have assets that we never had” pic.twitter.com/FgZnzYz33l

As he did following Thursday’s Fox News town hall, Trump responded to the blowback by taking to Twitter the next day to deny he said what he said.

Democrats are going to destroy your Social Security. I have totally left it alone, as promised, and will save it!

The backdrop of all this is that back in 2015 and ‘16, Trump differentiated himself from the rest of the Republican presidential hopefuls by campaigning on a vow to not cut government benefit programs.

Regardless of whether he’s lying, ignorant about his own budget proposals, or maybe even confused about what an “entitlement” is, the reality is that Trump wants to cut the social safety net — even if White House officials are unwilling to be honest about it.

Oklahoma primary election 2018 live results: governor and medical marijuana ballot measure
A simpler, more useful way to tax carbon
Democratic Governor John Bel Edwards hangs on to his seat in Louisiana
The most substantive answers from November’s Democratic debate
Harvey Weinstein has been sentenced to 23 years in prison
Community was one of the most inventive shows in TV history. Don’t let it be forgotten.