Trump went to Louisiana to stump for local Republicans. He ended up attacking national Democrats instead. 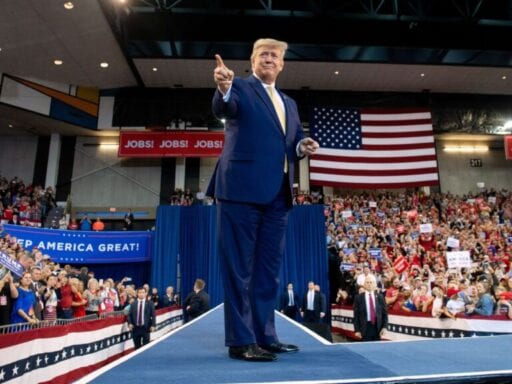 At a rally in Louisiana, Trump tried to do three things: pilot his 2020 strategy, defend against impeachment, and mobilize voters.

At a rally in Louisiana Friday night, President Donald Trump came out swinging against the impeachment inquiry he faces and signaled plans to embrace a general election strategy that will again rely on personal attacks against the Democratic Party leaders and his potential 2020 rivals.

Trump was at the Friday evening rally, in part, as the head of the Republican Party, a role he has not always fully embraced. While before the crowd in Lake Charles, a small city in southwest Louisiana, he called on voters to support either of the state’s two Republican gubernatorial candidates, saying, “One of these two guys are fantastic.” Governor John Bel Edwards — a rarity as a Democratic governor in the south — is facing a challenge that pollsters believe could lead to a runoff election with one of the GOP candidates.

“I need you to send the radical Democrat establishment a loud and clear message: You are going to fire your Democrat governor who has done a lousy job,” Trump said at the beginning of a wide-ranging, hour-and-a-half-long speech.

But Trump also used the night as an opportunity to attack the investigation into his relationships with foreign powers, calling House Democrats’ impeachment inquiry “bullshit.”

“The radical Democrats’ policies are crazy. Their politics are corrupt. Their candidates are terrible and they know they can’t win on election day, so they’re pursuing an illegal, invalid and unconstitutional bullshit impeachment,” he said.

Trump is currently facing an impeachment inquiry in the House as a result of a July 25 call with Ukrainian President Volodymyr Zelensky in which he is alleged to have asked the new leader to investigate the family of former Vice President Joe Biden, a leading candidate for the 2020 Democratic nomination. Trump has repeatedly denied any wrongdoing on the call, saying that it was “perfect.”

More recently, he has ramped up attacks on the inquiry itself. On Tuesday, the White House sent a letter to House Speaker Nancy Pelosi and other top House Democrats calling the process unfair, partisan, and unconstitutional.

On Friday, Trump concentrated and personalized that line of attack, saying that Pelosi’s involvement in the impeachment inquiry means that she “hates the United States of America.”

President Trump rails against Speaker Pelosi: “I used to think she loved the country — she hates the country … Nancy Pelosi hates the United States of America because she wouldn’t be doing this.” pic.twitter.com/R7meOSQhCb

And Trump said that a memo about the call, released by his administration in lieu of a full transcript, had left the House speaker — whom he called “Nervous Nancy” — feeling “stuck.”

But Pelosi was not the only Democratic politician that Trump called out by name. He also joked about Bernie Sanders, who suffered a heart attack last week. The Vermont senator and Democratic presidential hopeful missed several days of campaigning as he underwent treatment, but his team has since said that he is back at it.

Trump mocks Bernie Sanders for having a heart attack pic.twitter.com/1sphsh8oyM

But, Trump argued, this would ultimately benefit him, as he told the crowd that he thought he would win favor over Warren.

“I actually think they’re going to endorse me, because if they don’t, can you imagine having Pocahontas as your president,” he said of the media. The disparaging nickname “Pocahontas” is an allusion to the fact that the Massachusetts senator has historically identified as being of Native American ancestry, a claim she has apologized for and ceased making in recent months.

Trump’s use of that offensive nickname was his most explicitly racial comment of the night, a tonal pivot from the night before, when, in Minneapolis, he unleashed a similar level of aggression using more personal — and, at times, explicitly racist — terms.

There, he attacked Rep. Ilhan Omar (D-MN), and, as Vox’s Aaron Rupar reported, pushed fringe conspiracy theories linking refugees to crime waves. The line of argument stood out in a state known for its large Somali population, many of whom, like Omar, came to the United States as refugees.

It is notable that Trump did not tread this same rhetorical territory in deep-red Louisiana. Trump sees Minnesota as a swing state well within his ability to win in 2020, and he clearly hopes to do so by animating his base. Louisiana, on the other hand, is a state he won in comfortably 2016 — there, in safer territory, he appealed more to national-level politics, working more on attacking Democrats and defending against questions of impeachment despite being in the state to support local candidates.

A bellwether race in Louisiana

Those local candidates are hoping the president can help one of them win statewide office, however.

On Saturday, Louisianans cast ballots in a gubernatorial primary that analysts have said could be a bellwether for other statewide races this year. At stake is the question of how influential Trump can be in affecting the outcome of close elections, and to what extent Democratic voters in urban centers can counter more rural conservative voters throughout the rest of their states.

The Louisiana race pits incumbent Governor John Bel Edwards, a right-leaning Democrat who has restricted abortion access in the state, against five challengers. Most prominent among them are Rep. Ralph Abraham and Eddie Rispone, a businessperson.

Edwards is currently one of just a few Democratic governors in the south. The Republican Party sees the state as an opportunity to pick up another governor’s seat, and has invested heavily in the race, although some national party leaders fear that the campaign between Abraham and Rispone, which has at times turned testy, could undermine the party’s efforts in the state as a whole.

This is where Trump comes in — his visit was an attempt to mobilize Republican voters. Should Edwards secure more than 50 percent of the vote, he will retain his governorship; however, if he gets less, he will enter a runoff election against whoever is in second place. Historically, Republicans have won against Democratic incumbents in such contests, and because of this, GOP leaders have been trying to force a November runoff. Trump has indicated his support for this strategy, but has refused to endorse either Abraham or Rispone, arguing either would make a good governor.

LOUISIANA — Tomorrow, you will head to the polls and VOTE to REPLACE Liberal Democrat John Bel Edwards with a great new REPUBLICAN Governor! Get out and vote for either @DocAbraham or @EddieRispone (BOTH GREAT)! pic.twitter.com/Qyu6z9nZXr

At Friday’s rally, he brought them both on stage, while rebuking them for fighting one another.

Democrats are avoiding foods, bars, and clothes that remind them of 2016
Congressional Democrats’ last, long-shot attempt at climate progress this year
The Labor Department is investigating the visa program Mar-a-Lago uses to hire foreign workers
Nancy Pelosi explains what Democrats gained by holding onto the articles of impeachment
It took 11 months to restore power to Puerto Rico after Hurricane Maria. A similar crisis could happ...
The acting Pentagon chief was exposed to the coronavirus. He’s not quarantining.