As the Ukraine probe heats up, Trump and Giuliani are sticking together. Mostly. 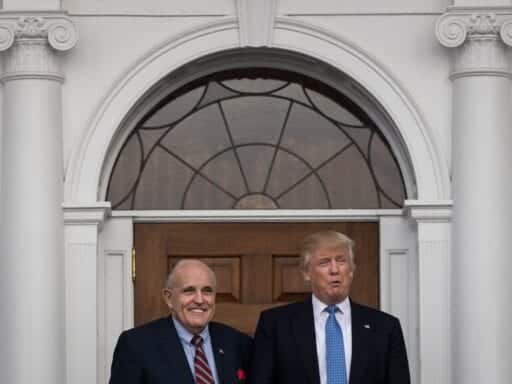 Is Giuliani still Trump’s lawyer? The president doesn’t seem sure, but says Giuliani is a “great guy.”

As the impeachment inquiry into President Donald Trump continues, Trump pushed back Saturday against speculation about whether he and his personal lawyer, Rudy Giuliani — a key figure in that inquiry — were on the outs.

“He may seem a little rough around the edges sometimes,” Trump tweeted of Giuliani, “But he is also a great guy and wonderful lawyer. Such a one sided Witch Hunt going on in USA. Deep State. Shameful!”

So now they are after the legendary “crime buster” and greatest Mayor in the history of NYC, Rudy Giuliani. He may seem a little rough around the edges sometimes, but he is also a great guy and wonderful lawyer. Such a one sided Witch Hunt going on in USA. Deep State. Shameful!

The tweet came a day after Trump appeared to distance himself from his lawyer, following a rough few days for the former New York City mayor that have placed him squarely at the heart of the impeachment inquiry that probes into potential wrongdoing in Trump’s dealings with Ukraine.

During a marathon hearing on Friday, the former US ambassador to Ukraine alleged Giuliani had orchestrated a campaign against her that led to her removal in order to protect the business interests of his allies. And on Thursday, an indictment was unsealed against two of Giuliani’s business associates, Lev Parnas and Igor Fruman, for campaign finance violations — part of a federal investigation that may include an investigation into Giuliani himself.

When journalists asked the president following the hearing whether Giuliani still represented him, Trump said, “I don’t know.”

“I haven’t spoken to Rudy,” Trump went on. “I spoke to him yesterday briefly. He’s a very good attorney, and he has been my attorney.”

Giuliani later told the Washington Post’s Josh Dawsey that he is still the president’s lawyer. He repeated this assertion to Politico on Saturday in a text: “Still President’s counsel in same way as before…no change,” he wrote.

Trump’s tweet on Saturday was not as unambiguous at Giuliani’s statements. But it does seem to indicate that the two men are, at least for now, maintaining their professional relationship — one that was solidified during Robert Mueller’s investigation into Russian interference in the 2016 election.

Giuliani may be becoming a liability for Trump

Giuliani has been front-and-center — often because he placed himself there — in the impeachment inquiry into Trump ever since a whistleblower complaint, released in September, alleged that Trump attempted to pressure Ukrainian leaders into investigating the family of former Vice President Joe Biden, a leading contender in the 2020 presidential race.

In a series of sometimes-bizarre television appearances, Giuliani admitted that the president had asked Ukraine to investigate the Bidens; repeatedly yelled at news anchors who asked questions about the phone call; and, at one point, inexplicably, read his own personal texts off of an iPad.

These defenses were often seen as unhelpful, but not overly problematic. In recent weeks, however, Giuliani’s name has begun being connected to the inquiry and the whistleblower’s allegations not in reference to his work as the president’s counsel, but as an active participant in the push to have Biden investigated.

Giuliani has long claimed — without evidence — that Ukraine has proof Democrats worked to undermine the 2016 election and that Biden abused the power of the vice presidency. As the inquiry has progressed, questions have been raised about the lawyer’s efforts to have Ukraine investigate those claims, including traveling to meet with Ukrainian officials. Giuliani, who is not a government official, said the State Department was aware of, and aided these efforts.

Hoping to better understand Giuliani’s role in the Ukraine matter, the former mayor was issued a subpoena by the House committees on intelligence, oversight, and foreign affairs for documents tied to the call with Zelensky on September 30.

Earlier this week, two of his business associates, Lev Parnas and Igor Fruman, were arrested for campaign finance violations; according to Reuters, Parnas was linked to a Ukrainian businessman under investigation for bribery.

And on Friday, Marie Yovanovitch, the former US ambassador to Ukraine, testified before a joint House of Representatives subcommittee, alleging she was ousted from her post in Ukraine last May at the request of the president’s allies, including Giuliani. She asserted that Giuliani had led a “concerted campaign against me,” smearing her among her colleagues and telling them that she had spoken ill of the president.

Yovanovitch further suggested that Giuliani may have taken on this campaign because he and his associates — including Parnas and Fruman, whom she alluded to but did not directly name — stood to benefit financially if the US halted its anti-corruption work in the region.

All of this suggests that Giuliani may not be doing many favors for his client, for whom he has worked as an unpaid attorney since April of 2018. Indeed, some aides to president have reportedly been pushing for Giuliani’s ouster, according to Politico, which was told by administration sources that the aforementioned behavior is evidence that Giuliani is a bad influence on their boss.

Over the course of his presidential tenure, and even during his campaign, Trump has severed a number of longtime professional relationships, including with close friend Tom Barrack and longstanding advisor Roger Stone. Another personal lawyer, Michael Cohen — a longtime ally and abettor to Trump’s political and business interests — ultimately testified against his former boss after the two fell out.

So it would not be completely unprecedented for Trump to cut off ties with Giuliani if he began to see their relationship as anything but helpful as he undergoes the fourth-ever impeachment inquiry in America’s history. But for now, it seems that Trump appreciates his lawyer’s loyalty, and will continue to brush off negative messages about the man as just another day in the “Witch Hunt.”

With all the votes counted, Pete Buttigieg won the Iowa caucuses — but Bernie Sanders is challenging
Live results for the pivotal Georgia Senate runoffs
The LGBTQ rights issue 2020 Democrats still aren’t talking about
Rick Perry’s spent a lot of time in Ukraine. Now he’s caught up in the impeachment inquiry
How voice actors are fighting to change an industry that renders them invisible
Elizabeth Warren is the favored VP pick among Democrats, poll shows