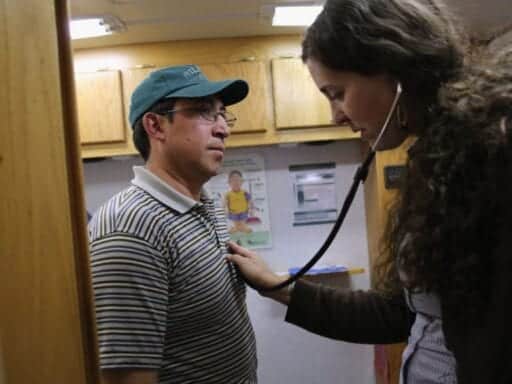 Physician’s assistant Stephanie Miller checks the heart rate of a farmworker from Mexico during mobile clinic visit to a farm on April 30, 2013, in Brighton, Colorado.  | John Moore/Getty Images

The justices voted 5-4 to allow the “public charge” rule to go into effect.

The US Supreme Court on Monday allowed a rule to go into effect that creates new barriers to low-income immigrants seeking to enter the US, representing a major victory for President Trump in his mission to restrict legal immigration.

The so-called public charge rule, published in August by the Homeland Security Department and originally scheduled to go into effect October 15, 2019, establishes a test to determine whether an immigrant applying to enter the US, extend their visa, or convert their temporary immigration status into a green card is likely to end up relying on public benefits. Opponents of the rule had challenged it on the basis that it flouts the narrow definition of what it means to be a “public charge” — dependent on government benefits — under federal immigration law.

In a 5-4 decision, the high court’s conservative majority voted to allow the rule to be implemented while legal challenges brought by the state of New York and immigrant advocacy groups proceed. Apart from Justice Neil Gorsuch, who derided lower courts’ attempts to block the rule before issuing final decisions, the justices didn’t elaborate on the reasoning behind the decision.

Immigration officials will now have much more leeway to turn away those who are “likely to be a public charge” based on an evaluation of 20 factors, ranging from the use of certain public benefits programs — including food stamps, Section 8 housing vouchers, and Medicaid — to English language proficiency. Julia Gelatt, a researcher at the Migration Policy Institute, a nonpartisan think tank, estimated that the rule will eventually affect more than 382,000 people.

Lower courts had prevented the rule from being implemented while it made its way through the courts. But rather than waiting for those courts to issue final rulings, Trump asked the Supreme Court earlier this month to intervene — a once-rare occurrence that has become standard practice under this administration — and to allow the rule to go into effect.

The administration told the Supreme Court on January 23 that Congress had given it significant freedom to broaden its interpretation of what it means to be a public charge, which it says is not limited to those who “almost entirely depend on the government’s support to survive.” That’s in line with Trump’s justification of the rule as a means of ensuring that immigrants are “financially self-sufficient” and “protect[ing] benefits for American citizens.”

“I am tired of seeing our taxpayer paying for people to come into the country and immediately go onto welfare and various other things,” Trump said when announcing the rule. “So I think we’re doing it right.”

The administration had also argued that the nationwide block of the rule was too broad.

A “single district judge should not be allowed to supersede … or dictate national immigration policy,” its brief at the Supreme Court stated.

Gorsuch appeared to agree with the government on Monday, writing that the “real problem here is the increasingly common practice of trial courts ordering relief that transcends the cases before them.”

Those challenging the rule have countered that, since its conception in the late 19th century, the idea of a public charge has “never included employed persons who receive modest or temporary amounts of government benefits designed to promote health or upward mobility” — the kinds of people who could now be subject to the rule. That understanding was codified in the Immigration and Nationality Act, the immigrant advocates and New York Attorney General Letitia James told the justices.

The rule would further Trump’s goal of keeping out low-income legal immigrants in particular, giving immigration officials significant discretion to turn away those who have used certain kinds of public benefits in the past. More than that, it’s already had a chilling effect on immigrants who are afraid of accessing public benefits to which they’re entitled for fear of dooming their future green card applications.

How the rule will target low-income immigrants

The US has been able to reject prospective immigrants who are likely to become a public charge since 1882. But since World War II, few immigrants have been turned away using those criteria. In 1999, the Clinton administration issued guidance that said only cash benefits, which very few immigrants use, would be considered in making the determination.

The Trump administration sought to define “public charge” much more broadly, giving immigration officials at US Citizenship and Immigration Services and Customs and Border Protection a laundry list of factors to consider. And it allows individual immigration officials to implement this complicated, 217-page rule as they see fit.

The rule gives individual, low-level officials much more vetting power than they have now, injecting a lot of uncertainty into the green card process. The rule could significantly affect who is allowed to enter and remain in the US as a lawful permanent resident.

Despite being blocked by the courts until now, the rule has had a chilling effect already: Noncitizens have been needlessly dropping their public benefits at alarming rates for fear that they will face immigration consequences.

Many immigrants aren’t eligible for public benefits, and not all public benefits are available to noncitizens. In the majority of cases, the best advice for immigrants is to keep using the programs to which they’re entitled, even if the rule eventually goes into effect, Doug Rand, a former White House official who worked on immigration policy in the Obama administration, said.

But for many immigrants who have already decided to drop their benefits, that advice is coming too late. The publicity surrounding the rule — and particularly more sweeping early drafts — has already accomplished what the Trump administration wanted: Immigrants are being driven away from public benefits.

An Urban Institute study found that, among about 2,000 adults in immigrant families surveyed, 13.7 percent said they or one of their relatives chose not to use non-cash benefits programs in 2018 as a result of reports about the rule. Eventually, the rule could lead up to 4.7 million people to withdraw from Medicaid and the Children’s Health Insurance Program, according to a report by the Kaiser Family Foundation.